Bear attacks aren’t unheard of in rural Montana. But attacked by the same bear, twice in one day? You’d have to ask Todd Orr about that. The trail engineer and knife maker survived two attacks on Sept. 30 and still managed to drive himself to the hospital—but not before filming and sharing his video of the ordeal.

During a recent interview with TIME, Orr described how he first spotted the grizzly bear and her cubs while he was hiking through Madison Valley to scout for elk. The next thing he knew, she was charging full speed at him, he said. He used his bear spray, which generally deters aggressive bears, but the grizzly jumped on top of him, biting his head and arms before walking back into the woods.

The Montana native says he then got up and began to jog back to his car, which was about three miles away. Ten minutes later, she was back, he said. This time, she bit his arm and shoulder before standing on top of him to make sure he was no longer a threat. Orr eventually managed to get up and hike out the rest of the way to his car.

Todd drove himself to the hospital after the attack. Local police were impressed that he remembered to buckle his seat belt.
Todd Orr

He filmed a video of himself explaining what happened and snapped a few photos to send to his hunting buddies before driving to the hospital. The next morning, after multiple surgeries, he decided to post the video to Facebook where he figured “around 50 people” might be interested. Within 24 hours, the video had racked up more than 20 million views. To date, more than 38 million people have seen it, with 600,000 Facebook shares and several hundred comments and private messages.

Orr chalks his survival up to a combination of luck and preparation. Knowing to lay face down on the ground while covering his neck and vital organs and remaining calm might have saved his life. Twice. Scott McMillion, author of Mark of the Grizzly and an informal consultant on The Revenant (which shows Leonardo DiCaprio’s character being mauled by a bear), said that bears are more likely to attack in the early morning, which may explain why she charged the first time. However, it’s “very odd” for a bear to come back, but he thinks the second encounter likely happened because both Orr and the bear left the scene in the same direction.

Grizzly bears are aggressive, but McMillion says fatal attacks are rare. Usually they attack because they feel startled or that their cubs are in danger.

According to Lynn Rogers, founder of the North American Bear Center, there are on average a couple of fatal bear attacks per year. According to the National Oceanic and Atmospheric Administration lightning kills about 100 people per year. That means you’re considerably more likely to be killed by lightning than by a bear.

For his part, Orr is just happy he was alone during the attack. ““What would freak me out would be if friends and family were in danger, and I would be the one taking the attack to try and prevent them from getting injured,” he says. He’s expected to make a full recovery following 5-6 more months of rehabilitation.

Orr plans to continue hiking and hunting as soon as he is physically able. Since the attack he has already gone fly fishing—despite having one arm in a splint. 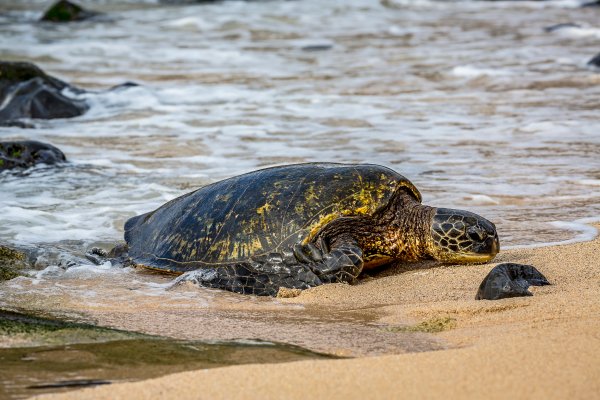 'Complete Idiots' Face Fines in Australia for Surfing a Turtle
Next Up: Editor's Pick