Why Environmental Groups Are Split on This Florida Congressional Race

Steve Burke pulls his dog, Toby, down a flooded street in a canoe after Hurricane Wilma arrived this morning Oct. 24, 2005 in Everglades City, Florida.
Carlo Allegri—Getty Images
By Justin Worland

Climate change and the environment have received precious little attention on the national stage this election season—not a single question was asked about global warming in the three presidential debates, for example. But the issue is front and center in one the country’s most competitive congressional races.

In Florida’s 26th congressional district, both Republican Congressman Carlos Curbelo and his Democratic opponent Joe Garcia have both battled to prove their bona fides on the environment. As a result the two candidates, who are fighting to represent the district located south of Miami, have split environmental groups and highlighted a strategic divide on climate change politics: whether it makes more sense to back Democrats exclusively, or try to build support across the aisle.

Curbelo appears to be the rare Republican who could break the partisan divide on climate change. Unlike most of his Republican colleagues, Curbelo accepts the science behind man-made global warming and was one of ten Republican representatives who voted in support of President Obama’s Clean Power Plan when his party held a symbolic vote to show its disapproval last year. “If it’s this or nothing, then I’m for this,” says Curbelo of the Clean Power Plan, which requires states to reduce emissions from power plants. “We just can’t endure this problem any more.”

Curbelo has positioned himself as a bridge between environmentalists and Republican climate deniers. The first-term representative co-founded a bipartisan congressional caucus calling for climate solutions and sponsored legislation aimed at identifying workable legislation to halt global warming. His work on Capitol Hill even earned him a segment in an upcoming episode of the show Years of Living Dangerously, a National Geographic series that highlights climate change problems and solutions.

“Taking action on climate change should be a bipartisan issue,” says Elizabeth Thompson of the Environmental Defense Fund (EDF) Action, which has endorsed the Republican. “There should be Republican leaders and Democratic leaders. Carlos Curbelo has really stood out in terms of wanting to be a leader.” (EDF Action is a political action committee, and a partner of the environmental group EDF.)

Curbelo’s opponents acknowledge that the 36-year-old Republican is a standout among his own party on climate change, but they argue environmentalists who support him are judging on a curve. Curbelo has a 23% voting record with the League of Conservation Voters (LCV)—though only three Republicans ranked higher—due to votes like his support of a bill to classify coal ash as non-toxic and support for lifting a ban on U.S. crude oil exports. His opponent Joe Garcia, earned a 79% LCV voting record during his one term on Capitol Hill between 2012 and 2014. “The Republicans are judged by a very different standard,” says Garcia. Curbelo, he adds, “is not actually for the environment. He’s just talking as if he’s for the environment.”

The race has divided some of the nation’s premier environmental groups. EDF Action endorsed Curbelo and supports his bipartisan approach—and has spent $450,000 on the race—while the Sierra Club has hailed Garcia’s across-the-board appeal on the issues and dispatched an operative to the region to help the candidate. “Curbelo carved out some leadership on the climate issue. That’s not enough,” says Melinda Pierce, legislative director at the Sierra Club. “We need a member of Congress who has a strong environmental voting record across the spectrum.”

The race has also witnessed a new force in environmental politics: groups focused on conservative solutions to climate change. The Clear Path super PAC, whose affiliated group is described as a conservative organization promoting the “clean energy agenda”—has spent $500,000 on the race, supporting the Republican Curbello. That represents a small fraction of the $5 million the group said it would spend on candidates this year. Curbelo also received the endorsement of the three-year-old conservative Citizens for Responsible Energy Solutions group.

It’s not just green groups that have made the environment an issue in Florida’s 26th district. Both Curbelo and the Democratic Congressional Campaign Committee (DCCC) have aired ads that mention global warming as well other environmental issues, and both candidates say climate change ranks as a top concern among voters in the district.

That’s not the norm in the U.S., where climate change is rarely a priority for voterrs, but the situation is different in Miami. The region is already vulnerable to the effects of sea level rise and stronger storms. More than $130 billion in real estate here is threatened by rising seas, according to a report. The Everglades—located in the 26th District—helps support the state’s $80 billion tourism industry, and are vulnerable to rising sea levels, salinization of groundwater and a slew of other warming-related problems.

“When I first started doing this, you weren’t allowed to say climate change because it made people very nervous,” says Garcia, speaking of his early days in elected office. “It’s become something that people get. People in Florida tend to be optimistic, but we want to lean in and act in a smart way to ensure we preserve our environment.”

The contest in Florida’s 26th District may show that real action in climate change will require bipartisan solutions—even if those are rare in today’s political climate. “You have to choose the planet over partisan politics,” says Jay Butera, congressional liaison for Citizens Climate Lobby, a nonpartisan climate advocacy group that has not endorsed either candidate. “A workable plan on climate change has to come from the middle ground.” 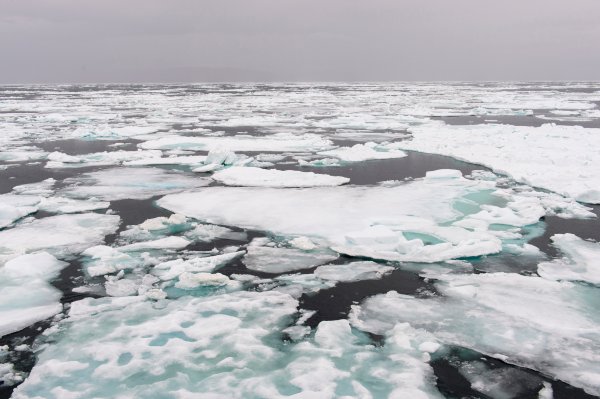 This Is How Much Arctic Sea Ice You Melt Each Year
Next Up: Editor's Pick