Leaders of the radical American student group the Weathermen, (left to right) Jim Mellen, Peter Clapp, John Jacobs, Bill Ayers, and Terry Robbins, march in 1969 at the van of a group of demonstrators during the 'Days of Rage' actions organized by the Weathermen to protest the trial of the Chicago Seven and 'to bring the war home.'
David Fenton—Getty Images
By Arthur M. Eckstein

The Weather Underground Organization was the most famous American radical group committed to political violence in the late 1960s and early 1970s. Starting in the summer of 1970, FBI wanted posters featuring images of Bill Ayers, Bernardine Dohrn and a dozen others were hung prominently in every post office in the United States, and this continued for years.

In retrospect, it seems odd that the Federal Bureau of Investigation elevated a band of about one hundred young people, mostly college students, into a leading place on the Bureau’s Most Wanted List. The FBI decision garnered Weatherman a huge amount of publicity and made some of its leaders famous. Yet the Weather organization was minuscule. To be sure, it was almost unique among radicals in that period in using dynamite bombs to protest government war policies, racial unfairness and corporate greed. The Weathermen believed that the evil of these acts warranted an extreme response—in fact, it warranted a revolution. But Weather only set off a total of 25 such bombs during its entire seven years of existence, all of them relatively small. And fully half of those bombs were detonated early on, in 1970. After that, Weatherman on average set off only one bomb every six months, mostly in the bathrooms of government buildings and corporation headquarters.

Yet for years the FBI leadership remained obsessed with capturing the Weathermen, and they remained prominent on the FBI wanted posters. Why? After all, by any rational measure, Weatherman was not an existential threat to the country; it was too small.

True, some of its operations were spectacular: the bombing of the Capitol itself (March 1971), the bombing of the Pentagon (May 1972), the bombing of the State Department (January 1975). Moreover, the Weathermen were determined revolutionaries, not kids out on a lark. They consistently proclaimed their desire to destroy the very system the FBI was sworn to defend. And when in summer 1970 the original decision was made to put some Weatherman leaders onto the Most Wanted List, the FBI believed there were as many as 1,000 Weatherman Underground guerrillas at large in the United States. If that had been the case, Weatherman might have constituted a serious problem for the country; but in fact the FBI overestimated the scale of the Weatherman organization by a factor of ten—and panicked.

And this was not the first time the FBI had miscalculated about Weatherman. Newly released FBI documents show that in the spring of 1969, Washington ordered its civilian informants in Students for a Democratic Society (SDS) to support the “National Office” faction (that is, Weatherman) against other factions in the organization. At that time, the FBI believed—wrongly—that Weatherman, because it was countercultural and anarchic, was the least dangerous group in SDS. When the 600-strong Weatherman faction walked out at the SDS national convention in June 1969 and formed the “true” SDS, among those 600 people were dozens of FBI civilian informants.

By autumn 1971—long after they had changed their name to the Weather Underground—it was clear that the FBI had been exaggerating the scale of the Weather threat; yet the Bureau still committed vast resources to pursuing the group. They diverted hundreds of agents and tens of millions of dollars away from fighting traditional crime. This was partly because of the occasional bombings, but also because the sheer presence of all those young Weathermen faces on all those wanted posters year after year constituted a humiliation to the Bureau—and the prestige of the Bureau was part of its power.

On the FBI side, then, bureaucratic interests and imperatives, not merely fears for national security, fostered a disproportionate effort to eradicate the group. Yet the fact is that FBI never permanently caught a single major Weatherman figure.

The Weathermen remained at large until 1977-1980, when most of them simply gave up their revolution and surfaced, resuming lives within mainstream society. There they have lived peacefully (if on the far Left) for the last 40 years.

Why did the Weathermen stand down?

The Weathermen thought of themselves as revolutionaries—that is, not merely as students acting out of anger over Vietnam and racism, but as politically minded organizers. They yearned to expand their numbers beyond a tiny revolutionary cadre. While they worried that the bulk of the white working class was corrupted by relative prosperity, and ineradicable racism which they called “white skin privilege,” they hoped that in the counterculture, made up of disaffected young people, they might find a constituency capable of eventually empowering their revolutionary project. But the Weatherman bombing policy had not won support even on the extreme Left. Even the Berkeley Tribe, the most radical underground newspaper in the country, publicly warned that lethal bombings would discredit Weatherman and isolate the would-be guerrillas from potential supporters—if they killed, they would be alone.

Get a book from our History collection with your paid subscription to TIME. Click here for more details.

Yet however large Weatherman’s constituency of radical students became, it turned out to be too small to be politically effective. By 1974, the leadership realized the problem. In an 186-page book called Prairie Fire—clandestinely printed by Weather, and clandestinely distributed with great success, despite the FBI—the leadership concluded that the only way to mount a revolution in the United States was to win over the American working class.

The Prairie Fire Organizing Committee was founded to prepare the way. But Prairie Fire set off an ideological struggle within the Weather organization itself, one that culminated in the spring of 1976 in the triumph of the more radical wing, which insisted on continuing the guerrilla war. From late 1976 onward, those who favored an aboveground mass organization—including Jones, Dohrn, and Ayers—either drifted away from Weatherman or were expelled. The charge was “rightist deviationism,” that is, moderation.

But the new leader—the elderly Stalinist Clayton van Lydegraf—was utterly incompetent, and the core of his group ended up being caught in 1977 and sent to prison. And over the next three years, the vast majority of the Weathermen, with no serious federal charges now pending against them, came up voluntarily from the underground and returned to mainstream society.

And yet the ‘60s Movement was, broadly speaking, a success, in that it helped to create a society where there was far more individual choice. Thousands of New Leftists agreed with the Weathermen’s analysis of what had gone awry in America. The surviving Weathermen are old now, but the last 50 years have seen remarkable progress in black rights, women’s rights, gay rights, Hispanic and Asian rights; and to that extent Weatherman’s violence—limited, as it eventually was—did not impede that progress. Like the enormous prestige of the FBI—which proved itself hapless in the pursuit of Weatherman—the myth surrounding this small group is bigger than the reality.

Adapted with permission from Bad Moon Rising: How The Weather Underground Beat the FBI and Lost the Revolution, by Arthur M. Eckstein 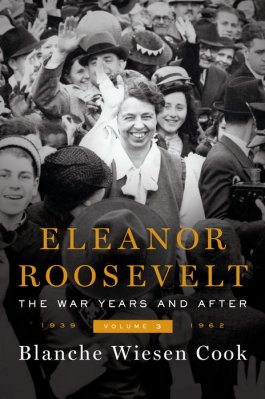 Eleanor Roosevelt, Hillary Clinton and the Legacy of Powerful First Ladies
Next Up: Editor's Pick