Roger Brooke Taney, the fifth chief justice of the United States Supreme Court, died late in the evening on Oct. 12, 1864. The following day Maryland voters narrowly approved a new state constitution that abolished slavery. When hundreds of African-Americans marched to the White House to celebrate, Abraham Lincoln observed that “it is difficult to realize that in the state where human slavery has existed for ages . . . by the action of her own citizens, the soil is made forever free.” Taney, one of Maryland’s most prominent citizens, would not have shared Lincoln’s satisfaction. As the author of the Dred Scott decision, he denied that blacks could be American citizens and declared congressional prohibition of slavery in the territories unconstitutional.

On Oct. 13, 2016, the Historic Preservation Commission in Frederick, Md., where Taney worked as a lawyer and is buried, voted four to one to remove a bronze bust of Taney from the courtyard of city hall. A recent story in the New York Times recounts the efforts of Frederick residents, both black and white, to transfer the Taney bust to a site that would not convey public approval—a process that has been delayed by the city’s inability to find a suitable location. Only last month did Frederick’s Mount Olivet Cemetery, which is privately owned, agree to display Taney’s likeness. The former chief justice has thus been swept up in a national debate over the future of Confederate images on state and city property throughout the South.

However, Taney’s legacy has been particularly controversial, in part because he was not, strictly speaking, a Confederate. Already 84 years old when Fort Sumter surrendered, the chief justice did not resign his seat on the Court. Contrary to what some historians have claimed, he did not believe secession was constitutional. And yet his Dred Scott opinion had helped fuel secession by giving the southern position on slavery constitutional validation. Furthermore, while he may have denied the constitutionality of secession, Taney clearly believed it was morally justified. He blamed the crisis on “free state aggression” and denied that the federal government possessed any “rightful power to bring back by force the states into the Union.” In a private letter to former President Franklin Pierce, the chief justice expressed his hope that Americans would soon recognize “that a peaceful separation, with free institutions in each section is far better than the union of all the present states under a military government, and a reign of terror preceded too by a civil war with all its horrors.” Later, when his wife’s grandnephew visited him before heading off to join the Confederate army, Taney expressed approval: “The circumstances under which you are going are not unlike those under which your grandfather went into the Revolutionary War.”

As the conflict progressed, Taney’s opinions, both public and private, made it clear that he was eager to hinder Lincoln’s ability to successfully prosecute the war. He denied the president’s authority to suspend the writ of habeas corpus. He considered the blockade, conscription, the Legal Tender Act, and the Emancipation Proclamation unconstitutional. Fortunately for the Union war effort, cases involving habeas corpus, the draft, legal tender, and emancipation never made it to the Taney Court. And by 1863, as Lincoln appointees replaced justices who had died or resigned, Taney, who was frequently ill and absent from the Court in any case, found himself with little power to challenge the administration.

As for Taney’s views on slavery, the Times contends that they were “ambiguous.” Yet a thorough examination of the evidence fails to confirm this assertion. It is true that some historians have held to the notion that Taney was personally opposed to slavery. The primary evidence they offer—which the Times mentions—is the Gruber case of 1818, in which Taney, as defense attorney for an abolitionist preacher, had denounced slavery as “a blot on our national character” that should be gradually wiped away. Around the same time, he freed most of his own slaves. Yet for the remainder of his life, Taney’s views were uniformly proslavery. As Andrew Jackson’s attorney general, he presaged his Dred Scott opinion when he announced that free blacks had no legal rights, only privileges. In response to a sympathetic Congregationalist minister who had written him in the aftermath of Dred Scott, Taney made the typical southern argument that slaves were “usually cheerful and contented, and free from any distressing wants, or anxieties. He is well taken care of in infancy, in sickness, and in old age.”

In 1857 the chief justice predicated the opinion of the Court in Dred Scott primarily on his own distinctly proslavery interpretation of American history. He devoted 24 pages of his 55-page opinion to the question of black citizenship—the issue upon which Scott’s owner had challenged Scott’s right to sue in federal court. As Lincoln argued in 1858, and as historians have subsequently maintained, Taney’s purpose was “to meet every threat to southern stability by separating the Negro race absolutely from the federal Constitution and all the rights it bestowed.” Through a highly biased examination of popular animosity toward and legal restrictions placed upon African-Americans at the time of the Revolution, he determined that when the Declaration of Independence was written, and when the Constitution was adopted, blacks had long been regarded as “beings of an inferior order . . . so far inferior, that they had no rights which the white man was bound to respect.” Here, and throughout his opinion, Taney revealed his determination to group slaves and free blacks together in a single legal category based on race. Free blacks and black slaves were equally inferior and equally disqualified for citizenship. He offered the Declaration as proof. It was “too clear for dispute” he insisted, “that the enslaved African race were not intended to be included, and formed no part of the people who framed and adopted this declaration.”

It is unsurprising that Taney’s legacy engendered controversy soon after his death, given that he had also used his Dred Scott opinion to invalidate the primary purpose of the pre-war Republican Party, which was to prohibit the extension of slavery into the territories. “The right of property in a slave,” Taney had proclaimed, “is distinctly and expressly affirmed in the Constitution.”

In late February 1865, Congress considered a bill to appropriate $1,000 for a marble bust of the late chief justice. It was to be placed in the Supreme Court alongside the busts of Taney’s predecessors. Republican senators immediately expressed opposition. Benjamin Wade of Ohio declared that his state “would pay $2,000 to hang this man in effigy rather than $1,000 to commemorate his merits.” Charles Sumner dramatically told the bill’s sponsor that “the name of Taney is to be hooted down the page of history. Judgment is beginning now; and an emancipated country will fasten upon him the stigma which he deserves.” In less vituperative terms, Sumner’s Massachusetts colleague Henry Wilson noted that a government act erecting a bust of any man in a public place was an indication to the world, and to posterity, that the people honor his memory and “cherish his fame.” “If it has not that meaning,” he reasoned, “it has no meaning at all.”

The Senate did vote to appropriate the funds for Taney’s bust—but not until 1874.

The congressional debate over Taney’s memory raises an important question. Is the removal of statues and flags, or the renaming of parks, highways, and college buildings, necessary to convey public disapproval of those who were previously honored? Some, including a majority of Frederick residents who spoke before the Historic Preservation Commission, argue that removal whitewashes the history of white supremacy and inhibits discussion and understanding. Others view public monuments to slavery’s apologists (and monuments to a slaveholders’ rebellion) as a deeply offensive sign of our failure to appreciate the scope and persistent consequences of America’s racist legacy. There can be little doubt that American history illustrates both the very best and the very worst human motivations. In so doing, it offers the context in which we can better understand the world around us. The nation’s history of slavery and discrimination should not be hidden away. Defenders of American servitude belong in classrooms and museums, and at state and national historic sites—places where that context can be explored. They do not belong in places where their presence is intended primarily as a public honor.

Dr. Jeremy Tewell is the author of A Self-Evident Lie: Southern Slavery and the Threat to American Freedom (2013). 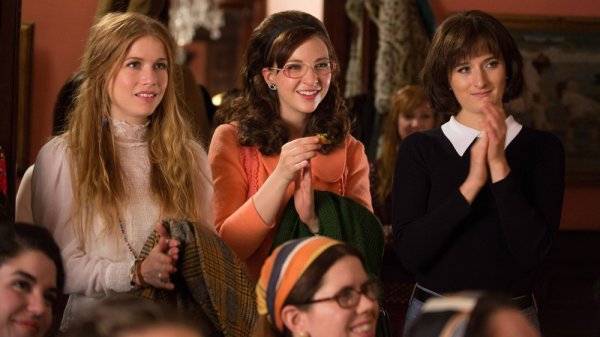 The True Story Behind 'Good Girls Revolt,' as Told in 1970
Next Up: Editor's Pick