Eight Rohingya Muslim women say they were raped at gunpoint by Burmese army soldiers during counterterrorism operations in the remote and conflict-ravaged Arakan state in the west of Burma, which is officially known as Myanmar.

Reuters reports that villagers claim dozens of women may have been sexually assaulted near the state’s northern Maungdaw township, though access to the area — which borders Bangladesh — is severely limited, making claims almost impossible to verify.

However, the news agency gained access to the village of U Shey Kya, where three women recounted their assaults in person. Five other women were reportedly reached by phone, and provided similar accounts of soldiers raiding their homes, looting their property and raping them.

One woman described being gang-raped by four soldiers. They also assaulted her 15-year-old daughter, she said.

A spokesman for the office of the President denied the allegations of sexual violence, according to Reuters. The military did not respond to the agency’s request for comment. A state police official told Reuters that the allegations were “propaganda for Muslim groups.”

The allegations follow a military lockdown on the area that began after what appeared to be coordinated attacks on three border patrol posts that killed nine policemen and eight suspected attackers on Oct. 9. The Burmese government said the attacks were carried out by Islamic militants with ties to foreign terrorist organizations.

Since the attacks, additional troops have been deployed to the already militarized area and search for what the government says could be about 400 suspected jihadists. According to official figures, 33 suspects have been killed since the sweep began.

Humanitarian aid has been suspended to all villages in Maungdaw, though some assistance is reaching other parts of the state. Western journalists and aid workers are not allowed to travel in Maungdaw, and some local journalists who have reported on the situation have been subjected to online harassment.

Arakan state, also known as Rakhine, is home to an estimated 1.1 million Rohingya, a stateless Muslim minority that is considered one of the world’s most persecuted peoples. Many Burmese view the group as illegal immigrants from Bangladesh, as does the government, which does not use the name Rohingya on official documents.

Rohingya make up the majority of the population in northern Arakan, but they are a minority in other parts of the state, where the population is mostly ethnic Arakanese and Buddhist.

Communal violence in 2012 left more than 100 people dead and about 140,000 others displaced, with the Rohingya bearing the brunt of the damage. About 100,000 still live in squalid displacement camps where they are largely denied movement, education and health services.

The October attacks and the subsequent crackdown are the toughest test yet for Burma’s new government, which is led by Nobel peace laureate Aung San Suu Kyi following her landslide win in elections last year. Her party flushed out a military-backed government and ushered in a wave of international optimism about the former pariah state, though the army retains significant political and economic power. 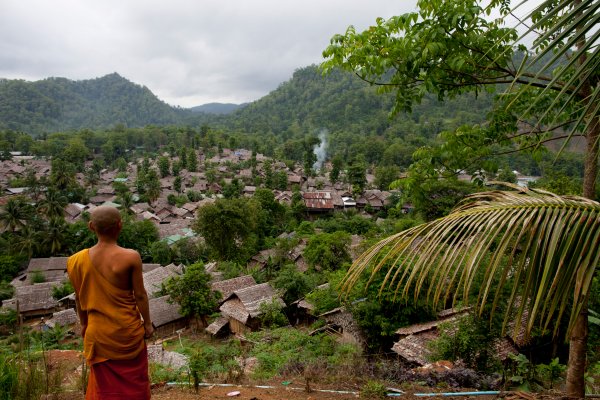 Refugees From Burma Begin to Return From Camps
Next Up: Editor's Pick