Michelle Obama and Hillary Clinton Hit the Road Together

The audience in Winston-Salem, N.C., could be forgiven for forgetting which Democrat is running for President.

It was Michelle Obama who had the last word at a rally on Thursday afternoon after being introduced by Hillary Clinton. The First Lady took more time to speak than Clinton did, and it was the First Lady who received longer and more effusive praise from her partner on stage.

“Hillary’s mini tribute to me has taken me off — kind of, thrown me a little,” Obama told the crowd after Clinton’s introductory remarks.

As Clinton has entered the last stretch of the election, her campaign has liberally deployed Obama as its most popular political surrogate. Thursday was the first time Clinton and Obama spoke on the same stage, and they played feel-good boosters more than antagonists to Republican nominee Donald Trump.

“I am grateful for Hillary for her leadership, for her courage and for what she is going to do for this country,” Obama said. “Thankfully Hillary is a policy wonk. When you are President, that is a good thing.”

“There are so many things I admire about our First Lady,” said Clinton.

Polls show that Michelle Obama is better liked than both her husband President Barack Obama and Clinton herself, the woman atop the Democratic ticket. The First Lady has campaigned for Clinton in New Hampshire and Arizona, was a keynote speaker at the Democratic National Convention and gained attention for her biting attacks against Donald Trump for his boasting about sexual assault, revealed in a 2005 tape.

Clinton and Obama had a notably less amicable relationship in 2008, when then Senator Barack Obama ran against Clinton for the Democratic nomination. That year, Michelle seemed to suggest that Bill Clinton’s sexual dalliances made Hillary unfit for the office.

“One of the important aspects of this race is role modeling what good families should look like,” Michelle Obama said in 2008. “In my view is that if you can’t run your own house, you certainly can’t run the White House.”

Her tone was much different in North Carolina on Thursday.

“If people are wondering, yes, Hillary Clinton is my friend,” she told the crowd at Wake Forest University. “She has been a friend to me and Barack and Malia and Sasha. And Bill and Chelsea have been embracing and supportive from the very day my husband took the oath of office.”

But eight years later and with the Democratic Party firmly united against Trump, the two presented a united front. Both have in common marriages to charismatic and controversial Presidents, and a struggle to define the role of the First Lady. Clinton played a pioneering role with ambitious plans for health-care programs that failed amid a popular backlash, and Obama has made healthier school lunches and nutritious eating her biggest initiative.

“She also planted an amazing vegetable garden at the White House, and I can promise you, if I win, I will take good care of it, Michelle,” Clinton said.

At the rally on Thursday, where the crowd numbered 11,000 in large part thanks to Obama’s appearance, the two focused on making a get-out-the-vote pitch in hopes of running up the score in North Carolina, a battleground state where Democrats are in tight races for a Senate seat and the governor’s office.

“Voting rights are at stake, and if you care about this sacred right, and want to make sure our leaders of both parties do their part to protect and strengthen it, you’ve got to vote in this election,” Clinton said.

Clinton has begun to make inroads among younger voters, but has been held back by her unpopularity. Clinton aides, meantime, have praised Obama as a surrogate. “There’s no more effective voice on the campaign trail than Michelle Obama, partly because she doesn’t do a lot of politics,” said Clinton’s communications director Jennifer Palmieri.

Without mentioning Trump’s name, the two both attacked the Republican nominee for his language about women and the allegations against him about sexual assault that have accumulated in recent weeks.

“I wish I didn’t have to say this, but indeed, dignity and respect for women and girls is also on the ballot in this election,” Clinton said. “And I want to thank our First Lady for her eloquent and powerful defense of that basic value.”

“We want a President who values and honors women, who teaches our daughters and sons that women are full and equal human beings worthy of love and respect,” Obama said.

Still, as Obama’s starring role on Thursday showed, she can easily outshine Clinton on the stump.

The First Lady is widely popular among younger voters, and some who have gone to see Clinton speak suggest they wanted to see Obama run for President.

“The whole Obama family, the whole Obama package is just so appealing and engaging,” Ben Hitchcock, a sophomore at the University of Virginia, said earlier this month. “I saw Michelle stumping for Hillary the other day, and I was thinking, ‘Let’s elect her.'” 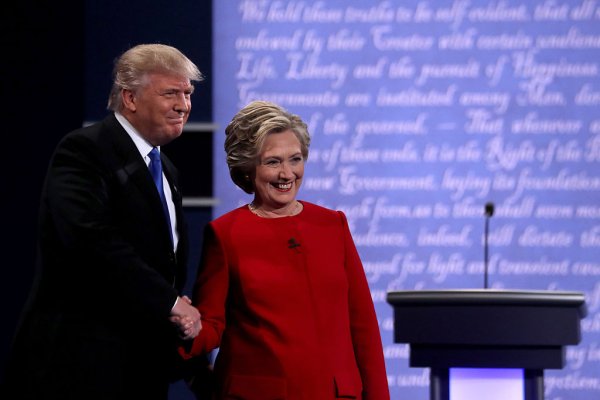 Donald Trump and Hillary Clinton Supporters Are Divided Over What Makes a 'Strong Democracy'
Next Up: Editor's Pick