The Yale Record Swears It 'Does Not Endorse' Hillary Clinton

A spate of publications that rarely endorse a presidential candidate have recently backed Democratic nominee Hillary Clinton, as have many that have traditionally endorsed a Republican candidate. Until September, the Dallas Morning News hadn’t endorsed a Democrat since 1940. Until mid-October, the Arizona Republic hadn’t endorsed a Democrat since its inception in 1890. But the 144-year-old Yale Record, the university’s satire magazine, is not one of those. Nope. Nuh-uh. No sir, no way. Not gonna do it.

In an editorial published on Oct. 26, the humor publication’s editorial board writes: “The Yale Record believes both candidates to be equally un-endorsable, due to our faithful compliance with the tax code.”

The Record claims in the editorial that it has “a strong commitment to being a tax-exempt 501(c)3 organization,” which most student organizations are. To remain so, like religious organizations and the Clinton Foundation and the Yale Daily News, the nonfictional college newspaper that did endorse Clinton, inspiring backlash for allegedly breaking tax code, the Record would need to follow a requirement set by the Internal Revenue Service that “If any of the activities… of your organization consist of participating in, or intervening in, any political campaign on behalf of (or in opposition to) any candidate for public office, your organization will not qualify for tax-exempt status.” (There are other rules, too, like how “If your organization provides an indoor tanning bed service, the [Affordable Care Act] imposed a 10% excise tax on services provided after June 30, 2010.”)

Hence, as the board writes, the Record shall not endorse “Hillary Clinton’s exemplary leadership” or the opportunity for “all citizens to shatter the glass ceiling once and for all by electing Secretary Clinton,” who earned a Juris Doctor degree from Yale Law School in 1973. Nor shall it endorse the Republican nominee, who the paper does not name.

Instead, it will remain silent. At least between the lines.

Correction: The original version of this story failed to note that the Yale Record is a satirical publication. 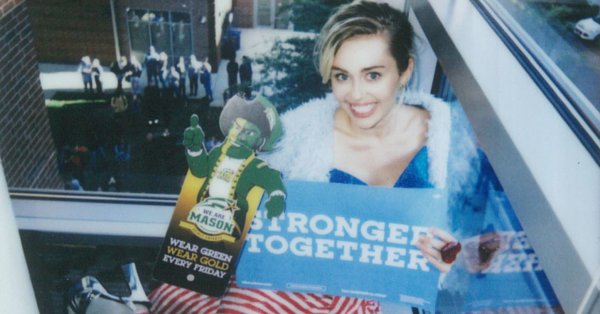 Exclusive: A Weekend With Miley Cyrus
Next Up: Editor's Pick