On Thursday, Chinese warships were scheduled to conduct military exercises in the South China Sea, the contested waterway through which flows roughly one-third of global maritime commerce. Announcing on Wednesday that the exercises would take place the next day, Beijing warned all other ships to stay away from a section of sea not far from the Paracels, a collection of islets, reefs and rocks controlled by Beijing. Also claimed by Vietnam and Taiwan, the Paracels have been transformed by Chinese engineering ingenuity and dredging into de-facto military bases, complete with surface-to-air missiles and a runway long enough to welcome fighter jets.

Less than a week before Thursday’s Chinese military drills, a U.S. navy guided-missile destroyer also ventured into waters near the Paracels. The USS Decatur‘s sail-by last Friday was described by the U.S. defense establishment as a freedom of navigation operation,” or FONOP, designed to challenge what the U.S. calls China’s “excessive maritime claims” in the South China Sea. (It’s worth noting, though, that an orthodox reading of a FONOP would require a vessel to enter within 12 nautical miles of a maritime feature, and the USS Decatur did not veer that close to the Chinese-controlled Paracels.)

The U.S. says it has conducted four FONOPS in the South China Sea over the past year in order to keep the peace in the Pacific. Beijing quickly deemed the USS Decatur’s route “illegal” and sent Chinese warships to tail the American destroyer, while the state-run media ramped up its criticism. “The U.S. does not want the South China Sea and regional situation to calm down and stabilize,” went an editorial in the Chinese Communist Party’s mouthpiece People’s Daily. “If no one else helps it to make a fuss here, Washington will stir up trouble by itself.”

Upon returning to Manila, Duterte promptly walked back his remarks—as he’s done in the past. But the Philippine President then embarked on a trip to Japan, where he said on Wednesday that he wanted “maybe in the next two years” to remove all foreign troops from Philippine soil. “I want them out,” he said of American soldiers, who have access to Philippine bases. This despite the fact that the U.S. is bound to the Philippines by a decades-old military treaty. Access to Philippine bases gives the U.S. Pacific Command a strategic point from which to counter a more assertive China in the South China Sea.

To confuse matters further, Duterte said on Thursday in Tokyo that the Philippines might want to conduct military exercises with China’s arch-rival, Japan. He continued to fulminate against the U.S., which once colonized the Philippines, saying that the Americans were “treating us like dogs on a leash.”

Duterte, who took office in June, has a habit of throwing verbal grenades into halls of international diplomacy, only to stroll away later, seemingly oblivious to the explosion. But even if he does dial back his America-bashing to please a largely pro-U.S. electorate at home—according to opinion polls, no country like the U.S. more than the Philippines does—his foreign policy has to please Beijing. After the international tribunal ruling went against China this summer, the Chinese government accused the Philippines of being an American lackey that always did the bidding of an arrogant superpower. Then Duterte arrived in town. “If Duterte says what he means, China has basically achieved most of what it wants in the South China Sea without doing anything,” says Ian Storey, a South China Sea expert at the ISEAS-Yusof Ishak Institute in Singapore. “Of course, the Chinese are also a bit unsure because they can’t trust this guy since he’s all over the place.”

During the Philippine presidential campaign, Duterte claimed that he would travel by jet-ski to contested reefs in the South China Sea to plant a Philippine flag. One disputed reef is Scarborough Shoal, off the Philippine coast, which was effectively seized by China in 2012. A high-level Philippine military officer, who does not want his name used because his words could be considered disrespectful to his commander in chief, complains that Duterte’s pro-Beijing tilt means that “he has thrown away his jet ski and thrown away our national treasures” in the South China Sea. In addition to Scarborough Shoal, the Philippines and China both lay claim to the Spratlys, another scattering of rock and reef that is prized by several regional governments.

For its part, the U.S. says that it has received no formal instructions from the Philippines to alter their long-standing military alliance. Beijing, too, may be adopting a wait-and-see approach. “No one expected in less than four months that Duterte would make such a big bang,” says Zhu Feng, executive director of the China Center for Collaborative Studies of the South China Sea at Nanjing University. “But we also don’t know how serious he is and how far he will go.” Notably, when Duterte’s predecessor Benigno Aquino III came to office, he spoke of bettering ties with China and snubbed the Nobel Peace Prize ceremony honoring jailed Chinese dissident Liu Xiaobo to placate Beijing. But it was under Aquino that the Philippines lodged its successful case against China at the Permanent Court of Arbitration in The Hague. Relations between the two nations plummeted.

In the meantime, China has engaged in regular military exercises in the South China Sea, roughly 90% of which it continues to claim as its inalienable territory. Thursday’s drills were characterized as normal search-and-rescue efforts but last month the Chinese and Russian navies conducted live-fire war games in its waters. Soldiers even practiced seizing islands, according to Western military analysts, surely a worrisome sight for smaller nations that are holding onto bits of South China Sea turf that China claims. After the USS Decatur sailed near the Paracels’ Woody and Triton islands, Chinese military media announced that the nation’s South Sea Fleet had recently conducted live-fire drills in the South China Sea.

Military exercises are one thing. A true escalation by China would involve either building on Scarborough Shoal, in the way that China has expanded seven other South China Sea outcroppings into military features, or creating an air defense identification zone (ADIZ) over the South China Sea. Such a zone, which Beijing has already declared over the disputed East China Sea, would require foreign aircraft to notify Chinese aviation authorities as they fly through airspace that five other governments claim, in part or in whole, as their own.

But Chinese experts on the South China Sea say it’s unlikely that Beijing will pursue game-changing moves in the short term, especially when Duterte has proven so conciliatory. “My view is that such actions will fuel tensions and will totally contradict the new momentum in China-Philippine relations in a truly harmful way,” says Zhu. “The basic tactic for Beijing should be to take a ride off of rapprochement to seek some sort of settlement that will benefit China and the region.” 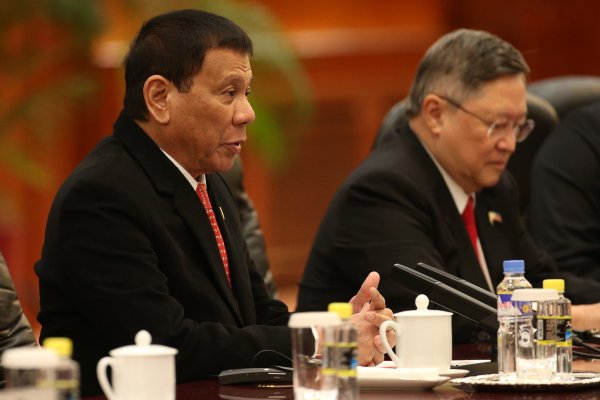