Naya Rivera Explains How Motherhood Made Her 'Truly Selfless'

Naya Rivera is quite the busy woman these days.

The actress and singer just released a new memoir titled Sorry Not Sorry, and most of her time and effort is going toward Josey Hollis, her 13-month-old son with husband Ryan Dorsey.

“It’s made me a much more observant person,” Rivera, 29, says about motherhood in her cover story for Mini Magazine‘s fall issue, adding the thing that has surprised her the most is “how truly selfless you become.”

Rivera, most recognizable for her six-season stint as sassy Cheerio Santana Lopez on Glee, explains that the most important thing in raising her son is that he becomes a good person.

“I hope to instill good morals and values in him,” she says. “I want to teach him to be confident but kind, strong but not proud, and to always be in love with life.”

The newly minted author, who blogged for PEOPLE during her pregnancy and early stages of motherhood, describes her typical morning as one that is full of activity with her son: cuddling, hide and seek, brushing their teeth — and a coffee run for Mom, of course.

“Breakfast is usually at 8 and now that Josey is older, we try to go out for breakfast a few times a week,” Rivera explains. “We also hit up Coffee Bean or Starbucks in the morning where Josey requests that I buy him a banana off the counter every time.”

“We’re back by 9 for his nap [and] I get an invaluable hour break,” she continues. “I use that time to answer emails and call my mom to tell her all the cute new stuff Josey did in the three hours prior.”

Aside from her schedule, Rivera admits motherhood has completely changed her — and that the biggest struggles come in finding time for herself.

“Taking the time to not worry about your house or to-do lists or the baby is hard, but necessary,” she says, adding that she takes care of herself by getting her hair done or going out to eat alone once in a while.

The challenges are completely worth it for the star, though.

“The love I get from him. Little things like the two kisses he stood up and gave me last night to say thank you for making him mac and cheese from scratch,” she says. “It’s a love never found anywhere or with anyone else.”

Rivera can’t help having one big worry, though, even though it’s still a decade away: puberty.

“I’m going to cry so hard when the day comes that he doesn’t want to hold my hand because it’s not ‘cool,’ ” she admits.

While her son is too young to read her new memoir, Rivera does hope he’ll one day learn a few lessons from the book.

“I hope he would take away that growing up has its challenges, but behind every cloud is a silver lining,” she says. 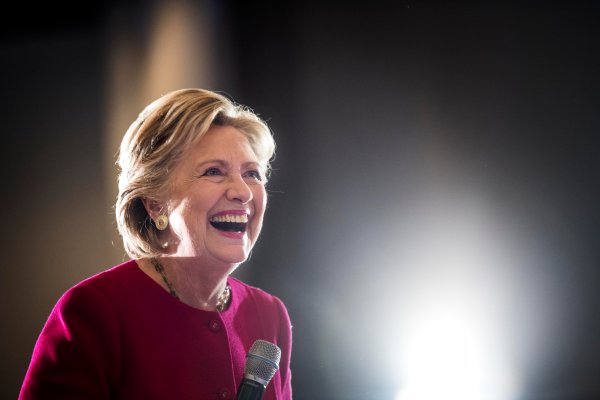 Hillary Clinton Wants a Literal Glass Ceiling Over Her on Election Night
Next Up: Editor's Pick