Pakistan's Inam Khan, owner of a book shop shows a copy of a magazine with the photograph of Afghan refugee woman Sharbat Gulla, from his rare collection in Islamabad, Pakistan, on, Oct. 26, 2016. A Pakistani investigator says the police have arrested National Geographic's famed green-eyed 'Afghan Girl' for having a fake Pakistani identity card.
B.K. Bangash—AP
By Nikhil Kumar/New Delhi

Thirty-one years ago, Sharbat Gula, a young Afghan refugee at a relief camp in Pakistan, became the subject of one of the most iconic magazine covers of all time. Her piercing sea-green eyes, captured in an arresting image by the photographer Steve McCurry and published on the cover of National Geographic in 1985, became a symbol of the turmoil in her homeland after it was overrun by Soviet troops in 1979. As the fighting raged, Afghanistan became the world’s single largest source of refugees at the time. Most sought shelter in neighboring countries, and at the peak of the crisis in 1990, a year after the Soviets retreated, there were more than 6 million Afghans living in nearby Iran and Pakistan.

Today, Gula is back in the news, facing up to 14 years in prison after she was arrested in Pakistan earlier this week on charges of possessing fake identity documents to remain in the country, as the authorities there crack down on what remains one of the world’s largest refugee populations. With the security situation in Afghanistan taking another turn for the worse, Gula has once again come to represent the plight of the millions of her fellow Afghans fleeing bombs and insurgent attacks. Unable to go home, those who fled south like Gula, often journeying on foot across treacherous mountains tracks to reach relief camps on the other side of the border, now find themselves increasingly unwelcome in Pakistan.

They have few options: back in Afghanistan, a resurgent Taliban is making ever more audacious bids to reclaim territory lost when a U.S.-led invasion displaced the militants from the capital Kabul. Taking advantage of the security vacuum created by the departure of most foreign troops from the country at the end 2014, the Taliban has driven civilian casualties to new records.

In Pakistan, they face growing official hostility amid a campaign to reverse the refugee exodus. A chill in relations between Islamabad and Kabul, which blames Pakistan for abetting violence in its territory, have been accompanied by public statements from Pakistani officials portraying Afghan refugees as a security threat. Over the summer, Sartaj Aziz, Pakistani Prime Minister Nawaz Sharif’s advisor on foreign affairs, said camps for displaced Afghans around the border between the two countries had become “safe havens for terrorists.” “In view of the security and socioeconomic impact, the tolerance level of the host communities has reached its threshold and cannot be overstretched,” he said in a local media interview.

The message for the roughly 2.5 million Afghan refugees in Pakistan couldn’t be clearer—go home. And many are returning, in increasingly large numbers: around 370,000 this year, according to U.N figures. In early October, nearly 52,000 crossed the border to return to Afghanistan over the course of just seven days, as Pakistani authorities mount what the U.N.’s refugee agency has called a “concerted push” to repatriate Afghans displaced by the turmoil in their country.

Writing online, Gerry Simpson, a senior researcher at Human Rights Watch, said only around 1.5 million of the 2.5 million Afghan refugees in Pakistan have documents protecting them from deportation. The remainder “have been forced to live in constant fear or arrest and deportation, ” with many, like Gula, resorting to bribing officials to get false identity cards.

They now face the risk of prison and a hefty fine. For Gula, who has spent her life moving between Afghanistan and Pakistan, the fine could reportedly be as high as $5,000, if she is convicted of ID fraud. “[Federal investigators] along with security forces came [on Wednesday morning], entered her house, searched all belongings and took important papers, including $2,800,” Gula’s brother in law, Shahshad Khan, told the Reuters news agency after she was moved to a prison in the northwestern Pakistani city of Peshawar. Her husband, he said, died five years ago, adding: “She is a poor widow. Her children her and she needs justice.”

Gula was only identified as the girl on the famous National Geographic cover in 2002, when McCurry tracked her down on a visit to Pakistan. After meeting her again near Pakistan’s border with Afghanistan, he said: “She’s had a hard life. So many here share her story.” More than three decades after her photo was taken, as the security situation in Afghanistan deteriorates and Pakistani authorities crackdown on Afghan refugees, that is as true now as it was then. —additional reporting by Abdur Razzaq/Peshawar 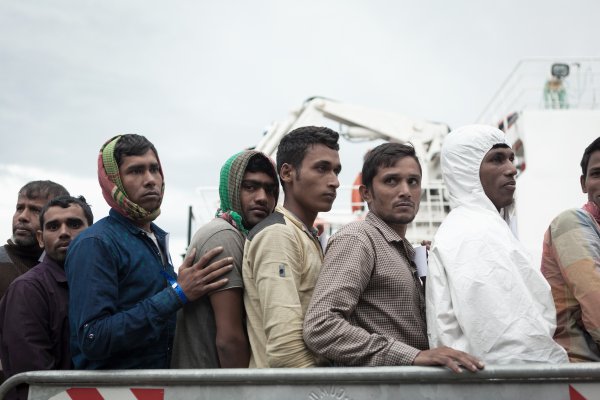 2016 on Track to Be Deadliest for Refugees in Mediterranean
Next Up: Editor's Pick