If people were already inclined to look at Donald Trump’s new hotel on Pennsylvania Avenue in Washington, D.C., as a symbol of his campaign, or at least of his presidential ambitions, he made the connection explicit during the property’s official ribbon-cutting ceremony.

“Today is a metaphor for what we can accomplish for this country,” Trump said onstage in what gold lettering announces is the hotel’s “Presidential Ballroom.”

Trump also said that he believes the hotel’s location is the best in D.C., “with the notable exception of 1600 Pennsylvania Avenue.” And the meeting rooms are all named after famous U.S. presidents—Adams, Kennedy, Washington, to name a few— and one named after himself.

Trump’s team said the hotel opening wasn’t a campaign event, although it was listed on Trump’s campaign website and had political guests such as former House Speaker Newt Gingrich and Sen. Jeff Sessions in attendance. Trump himself veered quickly into a version of a stump speech when he took the stage, reading off a Teleprompter and running through a list of examples of how the government is “over budget, behind schedule and simply nothing works,” including the Veterans Administration, infrastructure, military equipment, the tax code and the education system.

“We’ve built one of the great real estate companies of the world, but it seems very insignificant compared to what we’re doing now,” Trump said.

He returned to the metaphor, tying his vision of government to his success as a builder. “My job is to look at undeveloped spaces and imagine what they could be,” he said. “These are spaces that have no hope, no future. but you need imagination and you need the ability to get them done and to unlock their potential, and to unlock the potential of the people working on those spaces and on those projects, and we have so many things we can do for our country.”

Perhaps because he was on his own turf, inside a new, opulent ballroom within a building bearing his name, Trump struck a more optimistic tone about the future than his usual pitch. “The United States is great,” he said. “It’s great. Its people are great. There is no task or project too great, there is no dream outside of our reach. Don’t ever let anyone tell you it can’t be done. The future lies with the dreamers, not the cynics and the critics.”

But as Trump ended his speech and his break from the campaign trail wound down, he returned to his signature catchphrase at odds with his assessment of the country just moments before. “We have a divided nation, a seriously divided nation,” he said. “All of our people. That is how we will truly make America great again.”

Then he left the stage to cut the ribbon on his new building, before flying off to two campaign rallies in North Carolina. 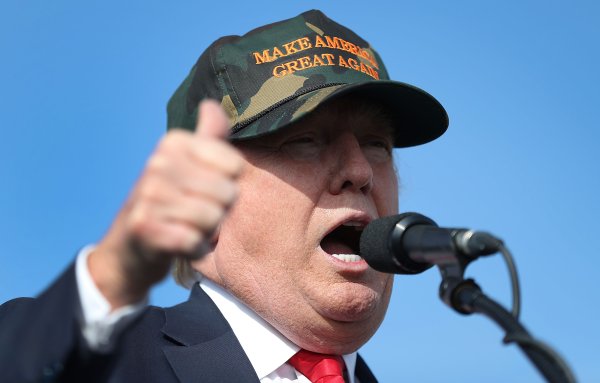 Donald Trump Up Slightly in New Florida Poll
Next Up: Editor's Pick