The good: Comfortable, Sleek design, Long battery life, Automatically tracks exercise, Swim-proof
The bad: Lack of a screen limits its usefulness
Who should buy: Swimmers; Those looking for an inconspicuous fitness tracker and don’t necessarily care about seeing fitness data in real time.

Fitbit’s fitness trackers have become more complex and sophisticated over the years, with some of the company’s wearables even offering a digital fitness coach or built-in GPS functionality. Now, the company is returning to its simpler roots with the recently launched Flex 2, a barebones fitness tracker that delivers the essentials for $99.95.

While the updated version of Fitbit’s Flex wristband will feel familiar to those who owned the original, the Flex 2 has some notable differences. The new band is slimmer than its predecessor, and is water-resistant. It also includes some of Fitbit’s more modern features, like the ability to automatically track specific types of exercise. As is the case with Fitbit’s older tracker, the Flex 2 doesn’t include a screen, instead showing alerts and daily progress through a series of illuminated dots.

But can the screenless Flex 2 hold up in an age during which many fitness trackers are beginning to behave more like smartwatches, and vice versa? Here’s a look what what it was like to spend a few days with the Flex 2.

The Flex 2 is 30% smaller than the original, making it one of the slimmest fitness trackers available, along with those made by Jawbone and Misfit. It’s easier to customize than Fitbit’s older model: The tracker can be easily wiggled out of its included rubbery classic band and placed in one of Fitbit’s more premium bangles ($89.95-$99.95) or pendants ($79.95-$99.95). Fitbit also sells its classic bands for $14.95 a piece, or in a three-pack of varying colors for $29.95.

I wore the Flex 2 continuously for about four days and found it to be generally comfortable and discreet. This is especially important for those who are looking for a fitness tracker to wear to sleep after using it all day. The clasp was sometimes difficult to undo, particularly if I was in a rush, but the Flex 2 was otherwise pleasant to wear.

The Flex 2 includes all of the important functions that a basic fitness tracker should offer. It can track steps taken, calories burned, and tally up active minutes throughout the day, as well as automatically monitor your exercise and sleep. The Flex 2’s standout characteristic is its ability to track swims — it can be submerged in up to 50 meters of water. That sets it apart from other Fitbit trackers, like the $129.95 Alta and $149.95 Charge 2. As with some of Fitbit’s older bands, the Flex 2 can issue hourly reminders that encourage you to take steps toward your daily activity goal.

The Lovebirds Is a Delightful Screwball Comedy

'The Trip to Greece' Is the Vacation We Need

During my testing, the Flex 2 had no problem automatically keeping tabs on my basic health stats. Fitbit automatically logged an aerobic workout in the app after I exercised wearing the Flex 2 for about 20 minutes, showing the duration of my session and calories burned. You can also dive deeper in the Fitbit app to see how a specific workout contributed to your overall daily fitness goal. I’ve generally found that Jawbone‘s fitness app is better at providing health-oriented advice for improving your habits, but Fitbit’s interface is cleaner and makes it easier to get a full picture of your overall progress.

For more advanced fitness tracking and analysis, you’d be better off checking out Fitbit’s other, pricier bands. The Flex 2 lacks a heart rate monitor and an altimeter, meaning it can’t track your heart rate or tell you how many flights of stairs you’ve climbed each day. The absence of a screen on the Flex 2 also means you don’t get to see data in real time, like you can on devices such as the Charge 2. Meanwhile, other Fitbit gadgets do more to help you understand the data they gather. The Charge 2‘s Cardio Fitness Level feature, for example, compares your resting heart rate against that of that of other people of your gender and age range to provide helpful context.

In lieu of a traditional screen, the Flex 2 includes five LED lights that illuminate in different patterns and colors to communicate information. If you’re receiving an incoming phone call, the tracker will light up with four white lights and a single blue light. A text notification would appear as one white light and one blue light, while the Flex 2 displays a single purple light and two white lights as a reminder to get some walking in.

It can take some time to learn how to interpret this code — about a full day of wearing and checking it, in my case. It’s helpful for checking your daily fitness progress, but it’s otherwise unintuitive.

The lack of a screen, however, works to the Flex 2’s advantage when it comes to battery life. The Flex 2 can last for multiple days on a single charge. I’ve been wearing it for four days without recharging it — much more mileage than you’d get out of many wrist-worn wearables with full screens. Still, I was able to get between four and five days out of the Charge 2, which packs many more features than the Flex 2.

The Fitbit Flex 2 is an adequate fitness tracker with an accompanying app that’s helpful and easy to understand. But if you’re going to invest around $100 in a fitness tracker, it might be worth spending a few extra bucks to get one with a screen. While the Flex 2 is comfortable to wear, it was annoying to reach for my phone every time I wanted to see how many steps I’ve taken or who that incoming text was from.

Yes, the Flex 2 is a good option for those on a tight budget, and for swimmers especially. But Fitbit’s Alta wristband is only about $30 more expensive, and its readable screen makes it much more useful. Those looking for a basic fitness tracker should also consider the Pebble 2 + Heart Rate, which, like the Alta, costs about $130. Although it may not be as discreet and attractive as Fitbit’s bands, Pebble’s watch delivers long battery life, heart rate monitoring, and can run a variety of apps. Buy here 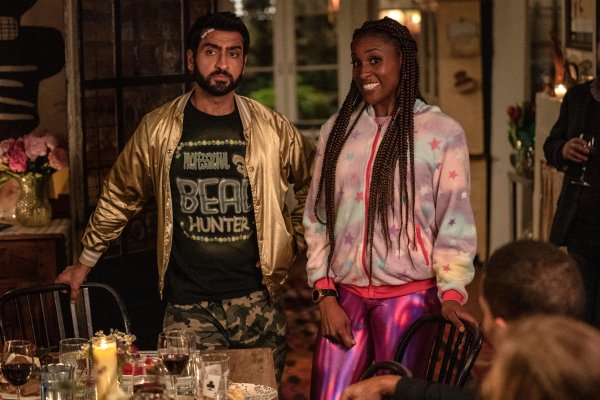 The Lovebirds Is a Delightful Screwball Comedy
EDIT POST