Man Who Dressed as Tree and Blocked Traffic Explains Why: ‘I’m a Tireless Advocate for Slowness’

A man in Maine who made headlines this week for dressing as a tree and blocking traffic said his stunt was inspired by a desire to slow down the world.

Asher Woodworth, 30, was arrested in Portland Monday for obstructing a public way after he covered himself in evergreen branches and stood in the middle of a busy intersection. He was captured on video moving at a glacial pace as officers led him off the road and into handcuffs.

The speed, he said, was key to the “performance.” “I’m a tireless advocate for slowness and quietness and stillness. We could use a lot of those things in the world right now,” Woodworth told TIME on Tuesday. “I guess I was just meditating one day, and this very clear vision of this performance came into my head. I knew I needed to do it.”

The larger project was to see how the unlikely demonstration would impact people’s “social choreography,” Woodworth said. He tested this out on a smaller scale in 2008 when he moved slowly through a supermarket’s checkout aisle. Similar to Monday’s unwilling participants, people were not pleased.

“I really went into it without any expectations about how people would respond,” he said. “Maybe it manifests as a delightful surprise or maybe people might be pissed off.”

It took Woodworth about two hours to construct the costume, he said. He first walked through the woods, collecting an assortment of branches from different evergreen trees, and then had a friend help him tie several layers of branches onto his clothes using twine, working from bottom to top. “The headpiece was sort of like a safari hat covered in mesh that we wove pieces of the pine bough into,” he said.

Police officers deconstructed the outfit on the sidewalk before taking Woodworth into custody, he said.

Woodworth, who was released from jail on $60 bail, said he is due back in court on Dec. 1. He declined to say how he planned to plead. Woodworth has no criminal history with the Portland Police Department, officials said.

The dance artist said he wanted the performance to be “thought-provoking” and to elicit a reaction. “I’ve seen on social media that people say, ‘This made my day.’ I’m perfectly happy with that response.” 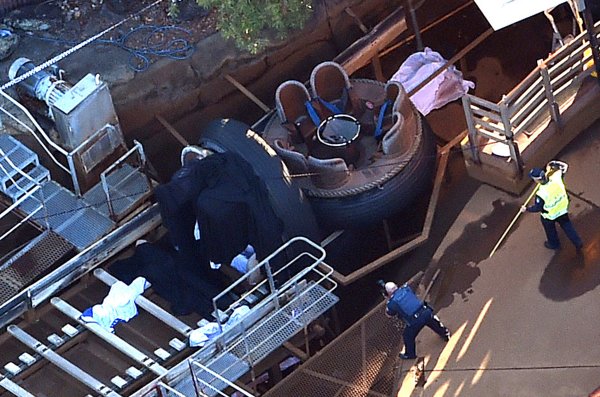 The Theme Park Ride Where 4 People Died in Australia Is Also Popular in the U.S.
Next Up: Editor's Pick