The Statue of Liberty Is Turning 130. Here's Its History in 90 Seconds

It was 130 years ago, on Oct. 28, 1886, that the Statue of Liberty was officially dedicated during a ceremony presided over by President Grover Cleveland. The celebration also included something that would eventually become a New York City tradition of its own: its first ticker-tape parade.

And the city had reason to celebrate: getting the Statue of Liberty there was no easy task.

Designed by French sculptor Frédéric Auguste Bartholdi and inspired by French law professor Édouard René Lefèbvre de Laboulaye, the statue was initially called Liberty Enlightening the World and was meant as a gift from France to the United States, celebrating the country’s independence. At first, the statue was assembled in pieces, with financing for the project proving to be difficult. The torch-bearing arm was first displayed in Philadelphia at the Centennial Exposition in 1876 and the head was exhibited at the Paris World’s Fair in 1878. The statue was completed in France in 1884, but money was still needed to complete the pedestal in New York. Eventually, a donations drive spearheaded by publisher Joseph Pulitzer attracted over 100,000 contributions and the pedestal was finished by April 1886.

In the 20th century, the statue acted as a beacon of hope and emblem of welcome to the many immigrants who passed through nearby Ellis Island, while serving as a patriotic icon while the United States’ fought World Wars I and II. But, even as its meaning evolved, the Statue of Liberty would continue to represent freedom in the United States—and, as TIME summed it up in 2009, become “a fixture of New York City and a symbol for the nation.” 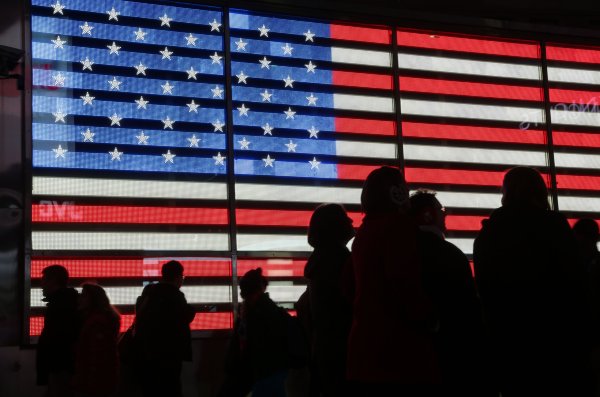 I'm a Muslim Immigrant and I Have Faith in America
Next Up: Editor's Pick