What to Know About the Nationwide Avocado Shortage

It’s official: there’s a national shortage of avocados. But before you go running to your nearest Chipotle in protest, here’s what you need to know:

A grower’s strike in Mexico has contributed to the problem

Mexican growers and pickers have been striking to raise the price of avocados in the U.S., unhappy with the low payment they have been receiving for their work with the fatty fruit (not a vegetable). These strikes have been described as the biggest disruption to avocado imports in history.

As did a drought in California

Avocados are “particularly ill-suited to withstanding the sorts of changes that are expected in coming decades, [such as] higher temperatures, more water shortages,” The Atlantic reports. Certainly, recent drought in California – where 80% of American avocados are grown (although only around 7% of the avocados consumed on U.S. soil are actually grown there) – have contributed to the fruit’s decline.

California’s issues with growing may have contributed to the Mexican strikes: produce buyer Cruz Sandoval told the Orange County Register that he heard Mexican growers are “holding out for more money because the California season is running dry, and there’s no other sources.”

So avocado prices are on the rise

Due to the shortages, avocado prices have been dramatically rising. Umina Brother, an L.A.-based produce distributor, told ABC that its prices have doubled since 2015 and Alan Arzoian, owner of Handy Market in Burbank, California, told CNBC that he’s seen a carton of avocados sell for up to $120 — they typically sell for around $40.

Quartz reports that the average price of $1.65 per avocado is the highest ever recorded in the southwest — and twice as much as it was six months ago. The problem is real for local suppliers and restaurant owners, who are having to choose between cutting their profits or pushing prices up.

But relax — Chipotle isn’t going to raise its prices

“We do not plan to raise prices for guacamole (we don’t typically raise prices in response to short-term cyclical changes in food costs) and have not incurred any supply disruptions,” a spokesperson from Chipotle told Business Insider. 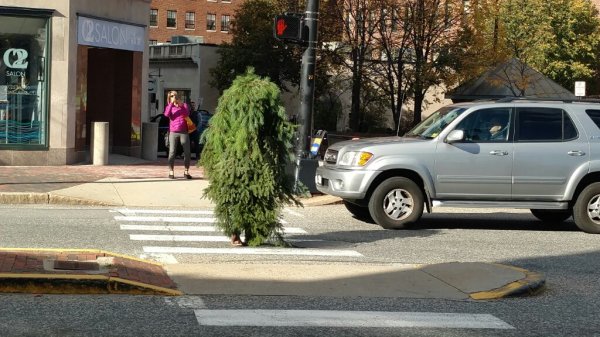 A Man Dressed as a Tree Got Arrested for Blocking Traffic in Maine, Police Say
Next Up: Editor's Pick