Otto, the self-driving truck company owned by Uber, recently completed what it claims was the first commercial delivery by a self-driving vehicle.

A truck outfitted with Otto’s autonomous driving technology shipped a truckload of Budweiser beer from Fort Collins, Co. to Colorado Springs, a distance of about 120 miles. Otto says the truck drove hands-free from exit to exit, though a human driver was in the cab for local streets and to take over in case of an emergency.

Other Otto vehicles pre-mapped the route ahead of time, which followed Colorado’s I-25. Some naysayers may consider that cheating, but it highlights an advantage of self-driving trucking fleets: As one such vehicle travels along a particular route, it can send mapping and other data to vehicles behind it as a helpful status update. That’s similar to the way airline pilots share weather reports to help other aircraft avoid turbulence and storms.

“The beauty of highway mapping with trucking specifically is that there are only about 200,000 highway miles in the U.S., so it’s pretty straightforward to scale that cost,” says Otto co-founder Lior Ron.

For making the delivery, Anheuser-Busch paid Otto an amount comparable to the market rate for such a shipment with normal, human-driven trucks, which Ron said was about $470.

Anheuser-Busch, a subsidiary of AB InBev, had been building a relationship with Otto since the trucking firm went public this past spring. “We think the benefits are very clear,” says James Sembrot, Anheuser-Busch senior director of logistics strategy. “This is the future of transportation. The benefits in terms of safety, environment, and operating more efficiently make it something we’re very excited to pursue.”

The adoption of self-driving passenger vehicles will likely be slowed by reluctance among buyers to be driven around by what’s essentially a robot. That problem is less present in the trucking industry, where the commercial advantages of self-driving vehicles are more immediately obvious: They can be safer and more fuel efficient than human drivers, making them cheaper to operate.

One complicating factor may be the role of human labor in an increasing self-driving trucking industry. Otto executives say the technology will aid rather than replace drivers. But that may not appease truckers anxious about their long-term future as their vehicles do more of the driving on their own.

Another hangup: Regulators will have to approve autonomous trucks, often on a state-by-state basis, a situation made more complex when it comes to interstate deliveries. “Something we’re very excited to do with this shipment is to show a model of how we can cooperate with the states,” says Ron. “The guys over at Colorado were very bold thinkers and very collaborative, both at the Department of Transportation and the Colorado State Patrol.” 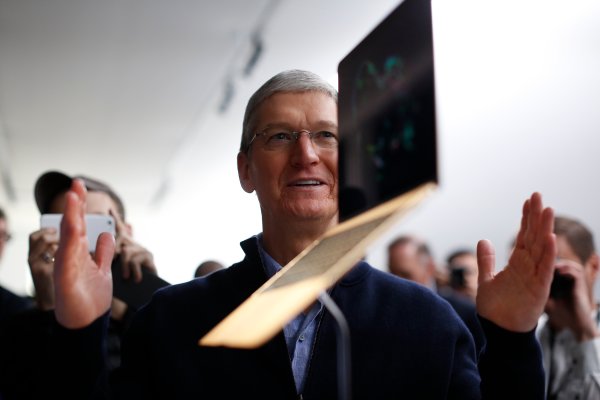 5 Things Apple Might Announce During Its Event This Week
Next Up: Editor's Pick