Yes, It's Possible to Get 'Let It Go' Out of Your Head

If you’re like half the people on the globe, the song “Let It Go” has been been playing on an endless loop in your head since you either saw Frozen, heard Idina Menzel/Adele Dazeem sing the film’s most infectious song on the Academy Awards, walked into any public space that has a radio on, or—in the most extreme cases—have children under 10. The authorized Disney version on YouTube has been streamed more than 166 million times. It’s been sung by TV traffic reporters and remixed as a club anthem.

Before you ask: No, pounding your head on your desk will not dislodge a song from your brain. But there is hope—not least because science is on the case.

The use of the word “infectious” is more than a metaphor in the case of a song like this, because the exponential way it spreads indeed resembles nothing so much as a pandemic. Think a flu can get passed around easily in a crowded elevator or movie theater? What about a song trickling from the Muzak or blasting from the screen? You can even pick it up person to person, on the street, passing someone who’s humming the blasted thing—the musical equivalent of an uncovered sneeze.

What makes these songs—which the Germans call ohrwurms and we picturesquely translate to earworms—stick, and how can you get them unstuck? First of all, not every song has earworm potential. Even Mrs. Wagner probably never got any of Richard’s songs stuck in her head—though research does show that classical composers and fans of their music can contract that form of higher-brow earworm. Typically, however, it’s the simplicity and repetitiveness of a song that gives it its auditory stickiness, U.K. musicologist Vicky Williamson told NPR in a 2012 interview. In the same way parents of babies and toddlers pick up every cold their viral-sponge children contract in day care and pre-K, so too do they become infected with Raffi and Barney and The Wiggles.

“I get many, many frayed parents who have listened to too many children’s introduction songs or learning songs,” Williamson said. “They heard them 30, 40, 50, 100 times and they’re stuck as a result.”

Commercial jingles, of course, are deliberately designed for just this contagious simplicity—a little like cooking up a superflu in a lab and unleashing it on the world. The target of the jingle or other earworm, says consumer psychologist James Kellaris of the University of Cincinnati, is the brain’s primary auditory cortex, which is located in the temporal lobe—a site also associated with short-term memory. But if you think the “short” part of short-term offers hope for the death of the worm, forget it. Some songs have the power to subvert the brain’s quick erasure mechanism, with each repetition only making the problem worse, the way that scratching a rash just makes it itch more. As Kellaris explained to a consumer psychology conference, “certain pieces of music may have properties that excite an abnormal reaction in the brain.” Indeed, “abnormal reaction” is a decidedly polite way of describing the feeling of being willing to extract your own brain through your ears as long as it means you could yank the song out too and stomp it to death on the floor.

Investigators at the University of Montreal are exploring using magnetic resonance imaging and transcranial magnetic stimulation to study more closely just what goes on in the song-infected brain. And the British Academy and the BBC have now launched an interactive website called, yes, The Earwormery, that fills you in on the latest news and asks you to take a survey—your contribution to earworm research.

As for what you can do today? Listening to another song is known to help, though the risk is real that the old worm will merely be replaced by a new one. Keeping busy with work, exercise or even a crossword puzzle tends to distract the brain and briefly silence the tune, though you can’t work or jog forever. And not that you’d want to go out of your way to make yourself sad, but good moods tend to be more closely associated with active earworms than bad moods. One University of Reading psychologist even suggests chewing gum, since the rhythm of the chew can disrupt the song.

The good thing is, nearly all earworms do eventually fade, so patience helps. If you’re stuck with the score of Frozen however, whatever you do, don’t start thinking about other kids’ movies, like, say, Despicable Me 2, with other catchy songs like, say, Pharrell Williams’ “Happy.” When that baby gets stuck in your head it’s…well, never mind. Too late. 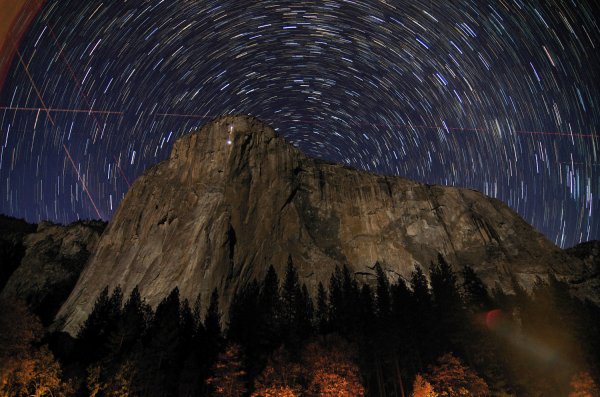 Window on Infinity: Star Trails Over Yosemite and a Supermassive Black Hole
Next Up: Editor's Pick