Millennials Finally Find Something to Love in Harder-Edged Hillary Clinton

It wasn’t the granddaughter stories or celebrity selfies that convinced Mary Alice Kukoski about Hillary Clinton.

The first-year college student at the University of Virginia was studying with a friend late last month when she took a break to watch the first presidential debate. There Clinton was, Kukoski recalled, wearing combative red and sparring with Donald Trump, calm, methodical and deadly.

“My beef with Hillary Clinton was that she was such a scripted politician,” said Kukoski, who voted for Bernie Sanders in the Democratic primary. “But she stood her ground against Donald Trump.”

“The debate was that badass moment where I thought, ‘If I wasn’t 100% with her before this, I definitely am now,'” she said.

After months of reaching out to younger voters with little success, it appears Clinton has finally turned a corner. Interviews with dozens of young people across competitive states reflect a growing enthusiasm for Clinton among a key Democratic demographic. Polls also show her support in the last month among voters aged 18-to-34 has ticked up significantly just weeks before Election Day.

Much of Clinton’s newfound popularity among millennials is redirected antipathy for Donald Trump, who is widely despised among young people as a cultural throwback.

But it is also thanks to Clinton herself, whose methodical takedowns of Trump at the debate and consistent campaign against the Republican nominee have endeared her to young voters.

“She has her own charm. She has her own power,” said Chris Proano, an 18-year-old student in Philadelphia who also supported Sanders during the primary. “You saw at the debate how calm she was and confident in her preparation.”

Young voters, even those supporting Clinton, still have deep reservations about the private email server and Clinton Foundation controversies and are suspicious of Clinton’s interventionist foreign policy and support on Wall Street.

But many say they are willing to overlook Clinton’s faults. They’re attracted to her toughness, and amid the campaign kitsch and carefully tested messaging, they say they are for the first time detecting a glimmer of authenticity in her fighting style.

According to a Quinnipiac poll taken in mid-September, Clinton won just 31% in a four-way contest, compared with 29% for Johnson and 26% for Trump; in the same poll taken in mid October after two debates, Clinton won 57% of the vote to Trump’s 20% and Johnson’s 19%. Several other polls show similar gains and suggest millennials are increasingly motivated to vote for her.

Eligible voters aged 18 to 35 will make up a larger proportion of the electorate than Baby Boomers this year, according to the Pew Research Center, and although they will turnout out in comparatively lower numbers, Clinton is depending on their support.

The campaign has poured time and money into winning over the youngest voters, and winning millennials is never far from Clinton’s mind.

“I think it’s pretty obvious that young people, like all of you that I am seeing in front of us tonight—this election matters to everybody but it matters more to you,” Clinton said at a rally in Philadelphia on Saturday near the University of Pennsylvania where the crowd was full of students.

“Secretary Clinton is going to win this campaign because of millennial voters,” said campaign manager Robby Mook earlier in October.

With her patrician’s demeanor and muddled message, Clinton has long had difficulty connecting with younger voters. In the race against Obama in 2008 and again this year against Bernie Sanders, she called for reasonableness and moderation, not vision. She seemed to many young voters more class treasurer than homecoming hero.

For young voters, she paled in comparison to President Obama, a campus phenom. His stenciled face was plastered in dorm rooms and rented apartments from Boston to Austin during his 2008 and 2012 run. The message of “change” and “hope” resonated with the under-30 crowd. Even his vices, like his joke about smoking pot “frequently” when he was younger, played well with the crowds.

Clinton’s aides this year, many of whom were veterans of Obama’s earlier efforts, say they recognized early on that they could never turn the Democratic nominee into something she was not.

“The real Hillary Clinton we try to represent—and not concoct—is who she actually is,” Teddy Goff, the chief digital strategist for Clinton and former adviser on Obama’s campaigns, said in an interview this year. “The one who we think will present a really compelling image to voters is the woman who knows what to do and will stop at nothing to get it done.”

Over the course of the campaign, Clinton’s staff floated and discarded slogans, tested new campaign messages and themes, shed and recycled outreach strategies and struggled to get anything to stick. The hacked emails on John Podesta’s server published on Wikileaks show a campaign that recognized Clinton’s shortcomings but had trouble finding the right message, especially for younger people.

“Millennials seem to have a more refined radar for political BS talk—things that sound cliché and political get tuned out,” Oren Shur, the campaign’s director of paid media, said after reviewing focus groups responses in July 2015.

During the Democratic primary, young people gravitated toward Sanders’ barn-burning brand of idealism and his earnestness over Clinton’s level-headed pragmatism. Sanders called for free tuition at all public universities, while Clinton set out a more modest debt-free college plan. The Vermont Senator favored universal healthcare while Clinton called for incremental adjustments to the Affordable Care Act.

Sanders “spoke directly to them and not as young people in particular but as people,” said Tad Devine, senior adviser for the Sanders campaign. “He didn’t say, ‘Listen, young people I’m talking to you.’ He spoke to their issues.”

Sanders accused Clinton of close ties to Wall Street and special interests, and Clinton at times snapped at her younger antagonists on the campaign trail. “I am so sick of the Sanders campaign lying about me,” she said to one Greenpeace activist in New York. According to one analysis of 27 states that had primary voting exit poll data, Clinton won just 28% of votes cast by people under the age of 30.

Even after Trump entered the race, she was trailing with young people many of whom told pollsters they supported third-party candidates. In a digital outreach effort helmed by Goff and digital director Jenna Lowenstein, the campaign produced well over 1,000 videos that painted Trump as an extremist and a kook, and Clinton as warm, tenacious and loyal. The campaign has also put a large effort into digital ads, planning $30 million in digital spending in in the last six weeks of the campaign.

Younger voters were more convinced by offhand moments than campaign slogans. A first-year at the University of Pennsylvania Law School recalled seeing a Humans of New York post of Clinton, where the candidate remembered a group of young men before her law school admissions test challenging her for taking the test. “I know that I can be perceived as aloof or cold or unemotional. But I had to learn as a young woman to control my emotions,” Clinton told the blog’s curator.

“The media does a good job of vilifying her,” said Christine Jeong, the 23-year old law student. “She does the same thing that her male counterparts do, but she’s judged because she’s a woman and a woman should be a certain way. There’s a double standard.”

Others saw testimonial videos of Clinton and people she has kept in touch with, or the campaign’s video cut of a question a teen-ager at a town hall in October asking Clinton about women’s body image. Ben Hitchcock, a sophomore at the University of Virginia, said he’d seen online videos of Clinton interacting with children and visiting a school. “Hillary doesn’t listen to Kendrick Lamar. But that’s okay,” said Hitchcock. “The idea that she’s cares about families and kids—that feels true to me.”

“She’s a real person,” said Noah Levick, a bushy-bearded 21-year-old who supported Sanders in the primary and goes to school in Maine. He waited on a chilly night in Philadelphia to hear Clinton speak. “She does seem to deeply care about issues of justice for women for children.”

Still, it was in the debates when they saw a candidate in her element, a lawyer-by-training who during three 90-minute sessions steadily cut into her opponent, goading him, baiting him and mocking him into making blunders.

“The way she reacted to Trump was relatable,” said Jane Tomic, a 25-year-old former Sanders supporter and student in Philadelphia. “That expression of complete disbelief at the things Trump was saying made me feel much more connected to her.”

On a cool Tuesday evening in Charlottesville earlier this month, Mary Alice Kukoski was one of a couple dozen students making phone calls for Clinton from a campus classroom. Most supported Sanders during the primary, but after watching Clinton next to Trump during the debates and withstanding a fusillade of social media outreach, they are supporting the Democratic nominee.

“Obama has a likability and a charisma that a lot of people think Hillary lacks,” said Cameron, a student making calls who declined to give her last name. “But the more I actually watch Hillary, the more I hear what she has to say, the more I find myself liking her.”

Clinton has been boosted by backing from popular Democratic figures including President Obama, Michelle Obama and Sen. Elizabeth Warren, who have campaigned heavily for her in recent weeks.

Sanders, Clinton’s former opponent, has asked his supporters to help Clinton defeat Trump. That, too, has helped.

“Bernie seemed like the only person who was running that I would trust as a human being,” said Lauren Maze, also a first-year at the University of Virginia who was there to make phone calls.

As for Trump, “I just liked the way Hillary shut him down in the debate,” she said. “The common enemy thing kind of helps.” 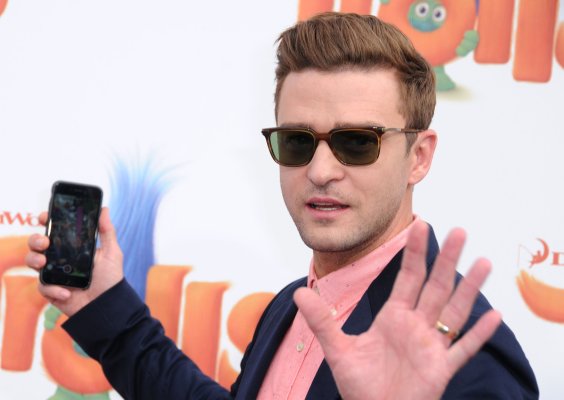 Justin Timberlake May Have Broken the Law When He Took a Ballot Box Selfie
Next Up: Editor's Pick