These, and much worse, were the scenes to which a jury in Hong Kong was subjected on Tuesday morning, on the second day of the trial of the man in question, 31-year-old, Cambridge-educated Briton Rurik Jutting. Jutting, formerly a banker at Bank of America Merrill Lynch here, was arrested in the early hours of Nov. 1, 2014, after he called police to his luxury apartment. There, officers found the decaying and mutilated body of the woman in the video, 23-year-old Sumarti Ningsih, shoved into a suitcase on his balcony.

On the living room floor lay the body of a second woman, 28-year-old Seneng Mujiasih. The apartment was strewn with cans of Red Bull and 26 small plastic bags that had each held a gram of cocaine. Authorities believe Jutting killed Sumarti, a single mother from Indonesia, on or about Oct. 27 after imprisoning her at his home for around three days; he killed Seneng, another Indonesian, early on Nov. 1, hours after bringing her back to his apartment and shortly before summoning the police.

Jutting’s trial — for two charges of murder and one for the unlawful disposal of a body — began on Monday. Arriving in court conspicuously thinner than he had been at the time of his arrest, he pleaded not guilty to murder on grounds of “diminished responsibility,” citing personality and substance abuse disorders. The prosecution rejected his appeal to reduce the charge to manslaughter.

The case has gripped the Hong Kong public and the British, Indonesian and international tabloids. On Tuesday, both the press and public galleries were filled to capacity with an audience to what will likely be the grisliest day of trial expected to last for 15 days. The prosecution presented as evidence the many minutes of video footage that Jutting had recorded on his iPhone, both prior to and after the murders of the women he solicited in bars near his home. (Though tabloids have branded the women “sex workers,” they were, like many of the hundreds of thousands of Indonesian migrant workers in Hong Kong, itinerant in their employment, working odd jobs at restaurants, as housekeepers, and occasionally in the sex trade to make ends meet.)

Because of the macabre nature of the footage, the trial was temporarily moved to a smaller courtroom where only the jury could observe the clips on personal video screens. The accompanying audio, however, was played to the court. Much of it consists of Jutting instructing a sobbing Sumarti to prepare herself for the coming abuse; several minutes are simply the sound of Jutting’s various weapons striking her body.

After he finally killed Sumarti — he slit her throat — he turns the iPhone camera on himself, recording hours of nearly incoherent personal narration that, on Tuesday, were presented to the jury, the public, and the press. In the videos, a nude and sweaty Jutting confesses to his first murder.

“I cut her throat while she was voluntarily bending down on her hands and knees licking the rim of a dirty toilet bowl,” he says in the video. “She did it voluntarily because she knew if she didn’t I would beat her very badly.”

He then proceeds to launch into a rambling discourse on a string of topics: his cocaine dependency; his violent sexual fantasies; the woman he had killed minutes before, whose body was bleeding on the floor of his shower.

“The fantasy last weekend was that I’d go back to the U.K., rent a little flat in London but also rent somewhere outside of town,” he said at one point. “I’d go to a well-known public girls’ school and then kidnap kind of three teenage girls around the age of 15. Basically turn those girls into sex slaves.”

The jury appeared stoic as the footage was presented Tuesday morning; Jutting himself occasionally closed his eyes and turned his head upwards, as if in contemplation or prayer.

Indonesian migrant workers hold up placards during a vigil for slain colleagues Seneng Mujiasih and Sumarti Ningsih on the eve of the murder trial for former British banker Rurik Jutting, in Hong Kong's Victoria Park on Oct. 23, 2016.
Tengku Bahar—AFP/Getty Images

In a poignant statement released on Monday, Sumarti’s family called for Jutting to be punished and said: “The case has hit our family very hard. We lost [Sumarti]; we never imagined such thing could ever happen. Our life has been sunk into endless sadness.”

The defense team is meanwhile slated to begin presenting its own evidence next Monday. The defense does not dispute the facts of the case but is seeking the lesser charge of manslaughter for Jutting.

The case’s ghastly nexus of brutality, sex, cocaine, death and privilege has, predictably, attracted global interest. Among the members of the public gallery Tuesday morning was 28-year-old William Simpson, an Australian visiting Hong Kong, whose first stop was the trial at Hong Kong’s High Court.

“I’ve been following the case on the Internet, and my friend, who’s working here, told me the trial of the century was going to happen while I was here. The nature of the case is so terrible, but at the same time, one can’t really look away.” 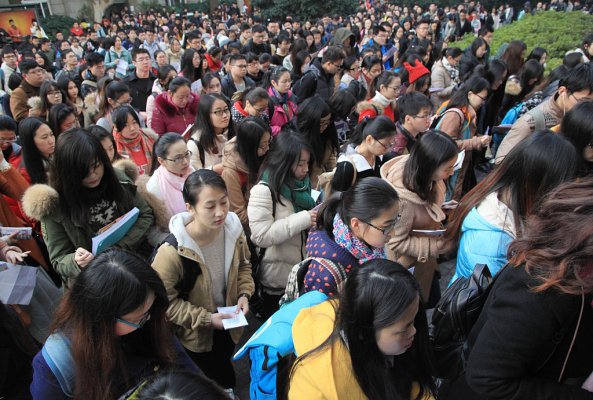 Nearly 8,000 People Apply For the Same Job in China
Next Up: Editor's Pick