Five Things to Watch in This Year's World Series

Cubs. Cubs. Cubs. We get it. A team going for its first World Series title since William Taft got elected President and the Model T debuted is irresistible. The Cubbies have their charming Billys — Goat and Murray.

But let’s not overlook the Cleveland Indians, a team that knows from heartache, representing a city long down on its luck. Sure, Cleveland ended its 52-year major professional sports title drought in June, when LeBron James guided the Cavs to a comeback win over the Golden State Warriors. But one basketball championship won’t erase the pain long felt by Indians fans, who haven’t tasted a World Series win since 1948.

Plus, Chicago has enjoyed plenty of sports success over the years. The Bulls won their six titles in the Michael Jordan era. The Bears won a Super Bowl after the 1985 season, the White Sox ended a long stretch of futility by winning the 2005 World Series, and the Blackhawks have taken a trio of Stanley Cups this decade. Cleveland deserves its moment.

Therein lies the beauty of this World Series, which starts Tuesday night at Cleveland’s Progressive Field. No matter the result, one team will make history. Here’s TIME’s guide to the 2016 Fall Classic.

Back in 2004, Theo Epstein, the 29-year-old GM of the Boston Red Sox, hired Terry Francona as manager; Francona rewarded Epstein’s faith with Boston’s first World Series since 1918, ending the “Curse of the Bambino.” They both left Boston after the 2011 season: Epstein now runs the Cubs, while Francona is in his fourth year as Cleveland’s manager. Whoever ends a second infamous championship drought is probably a lock for the Hall of Fame. “I’m really proud of him and the job that he’s done over there,” Epstein said of Francona before the start of the World Series. “The only misgivings I have about it is, as great a manager as he is, he’s an even better postseason manager. So maybe we wish we were going up against someone else.”

Cleveland’s Andrew Miller, who like Chicago’s flame-throwing closer Aroldis Champan, started the season in the New York Yankees bullpen, hasn’t given up a run in 11 2/3 playoff innings. He has struck out 21 batters this postseason, and won the ALCS MVP. The lefty has broken all kind of bullpen conventions, as Francona deploys him as needed, instead of relegating him to a specific inning like many managers do by rote. This October, he’s come in as early as the fifth inning, and even closed a game. The Cubs just don’t want to see him, no matter when he jogs out of the pen.

The Cubs have their own breakout star of the playoffs. Second baseman Javier Baez has done a little of everything this postseason, like stealing home, executing brilliant double plays in the field, hitting .342 with a home run and four doubles. With young talent like Baez (23), MVP candidate Kris Bryant (24), and All-Star shortstop Addison Russell (22), the Cubs should succeed for a long, long time.

Francona plans on pitching Trevor Bauer in Game 2 or 3 of the World Series, as long as he’s recovered from his drone injury. That’s right: Bauer, a mechanical engineering major at UCLA and a quirky guy to being with, designed his own drone. But during the ALCS, his start got pushed back a game after one the propellers clipped his pinky and he required stitches. Bauer tried to pitch in Game 3 against the Toronto Blue Jays. Instead, he treated millions of television viewers to the sight of blood, dripping out of his gashed hand and Francona had to remove him from the game. Bauer forgot that age-old axiom: leave your drones alone during the playoffs. He’ll have a chance to atone for that mistake in the World Series.

For most teams, one competent backup catcher is a luxury. The Cubs, however, have three standout signal-callers. Miguel Montero launched a pinch-hit grand slam that won Game 1 of the NLCS. Willson Contreras, a rookie, shook Wrigley Field in the Game 6 clincher with a solo shot. David Ross — “Grandpa Rossy” — hit a division series home run. Ross, who’s 39 and in his final big league season, also has a long-standing relationship with Cubs pitcher John Lester. With his personal catcher behind the plate, Lester finished the NLCS with a 1.38 ERA in two starts, and won co-MVP with Baez.

No team has ever had three different catchers hit a home run during the playoffs. Plus, Chicago will likely add catcher-outfielder Kyle Schwarber to its World Series roster. Schwarber, another big, young bat for Chicago, tore knee ligaments in April and was slated to miss the entire season. Since he’s still struggling with his mobility, Schwarber would be limited to designated hitter and pinch hitter roles. But his recovery just adds more punch to what’s already a championship-caliber offense. 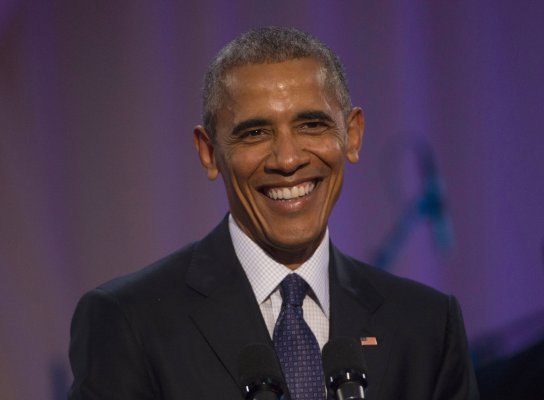 Even President Obama Is Happy the Cubs Are Going to the World Series
Next Up: Editor's Pick