Donald Trump Argues Polling Methods Are Rigged Against Him

Donald Trump’s newest conspiracy theory is that pollsters are over-sampling Democrats to make it seem like he’s down in the polls.

Trump signaled his new theory in a tweet Monday morning, writing, “Major story that the Dems are making up phony polls in order to suppress the the Trump . We are going to WIN!”

As evidence, Trump said in St. Augustine that “Wikileaks also shows how John Podesta rigged the polls by oversampling Democrats, a voter suppression technique.” He was apparently referencing a 2008 email revealed in the email hack of Hillary Clinton’s campaign chairman. The email, by Democratic activist Tom Matzzie, reads, “I also want to get your Atlas folks to recommend oversamples for our polling before we start in February. By market, regions, etc. I want to get this all compiled into one set of recommendations so we can maximize what we get out of our media polling.”

But as the Washington Post explains, Trump’s comment fundamentally misrepresents what this email is talking about. This campaign email would be referring to an internal poll, not a public one. And polls often need to over sample certain subgroups to get statistically accurate data.

“Normal polling in a state will usually have no problem getting enough white people in the mix to evaluate where they stand, but you may need to specifically target more black or Hispanic voters to get a statistically relevant sample size,” the Post explains. It’s also worth noting that more Americans identify as Democrats than Republicans: 30% to 24%, according to Pew Research.

Trump himself even admitted that he is “somewhat behind in the polls” in a North Carolina radio interview on Monday, Politico reports.

Still, in St. Augustine, Trump chalked up his campaign’s current state to the Clintons, the media and elites conspiring against his candidacy.

“When the people who control the political power in our society can rig investigations, can rig polls, you see these phony polls, and rig the media, they can wield absolute power over your life, your economy and your country, and benefit big time by it,” Trump told his audience. 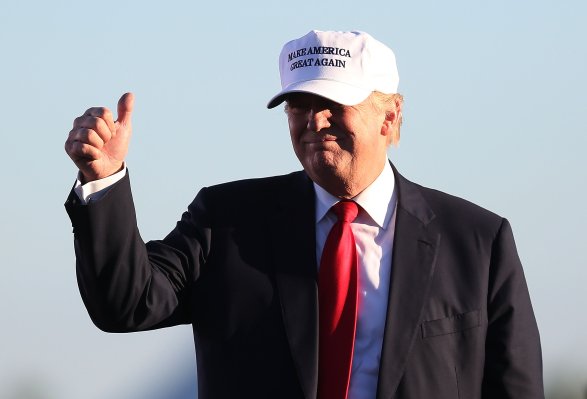