Steam rises from the cooling towers of the coal power plant of RWE, one of Europe's biggest electricity and gas companies in Niederaussem, Germany, on Mar. 3, 2016.
Wolfgang Rattay—Reuters
By Justin Worland

The average level of carbon dioxide in the atmosphere across the globe passed 400 parts per million (ppm) last year, a symbolic and worrying milestone in growth of manmade climate change, the World Meteorological Organization (WMO) confirmed Monday.

The carbon dioxide concentration is unlikely to dip below the 400 ppm mark for at least several decades, even with aggressive efforts to reduce global carbon emissions, according to the WMO report, which confirms similar findings reported last month. Carbon dioxide can last in the atmosphere for thousands of years without efforts to remove it.

“The year 2015 ushered in a new era of optimism and climate action,” said WMO Secretary-General Petteri Taalas, referring to the landmark Paris Agreement to address climate change. “The real elephant in the room is carbon dioxide, which remains in the atmosphere for thousands of years and in the oceans for even longer.”

Governments from across the globe committed to cutting their carbon dioxide emissions in the Paris Agreement, negotiated at the end of 2015, but most climate policy experts believe that scientists will need to develop cost-effective methods to actually pull the gas out of the atmosphere to keeping the globe from warming more than 2°C (3.6°F) by 2100. That’s the temperature goal of the Paris Agreement and the level that, if crossed, scientists say could bring the worst effects of climate change.

Passing the 400 ppm threshold will not trigger any devastating effect by itself, but it does provide one metric of just how fast humans are emitting carbon dioxide. It is the concentration of carbon in the atmosphere that actually intensifies the greenhouse effect, in turn warming the climate. (On Venus, where carbon dioxide concentrations in the atmosphere reach 30,000 ppm, the average surface temperature is a toasty 864 F (462 C). Just what level of carbon concentration in the atmosphere poses an irrevocable danger is up for debate. Many scientists pegged 450 ppm as a red line, while others have said 350 ppm—which the Earth passed years ago—is the safe upper limit. (The Bill McKibben-led climate advocacy group 350.org takes its name from that number.) The reality is that there is no absolute red line—climate change isn’t catastrophic at 401 ppm and safe at 399 ppm. But we do know that the more carbon we put into the atmosphere with no ability to take it out, the warner the world will get.

The finding comes as the globe continues to experience record a series of temperature records. Eleven of the last 12 months have been the hottest on record and 2016 is widely expected to be the hottest year ever recorded. At the same time, governments from around the globe have made significant progress on the issue in the last several months—from quick ratification of the Paris Agreement to passage of new deals on aviation and HFC emissions. 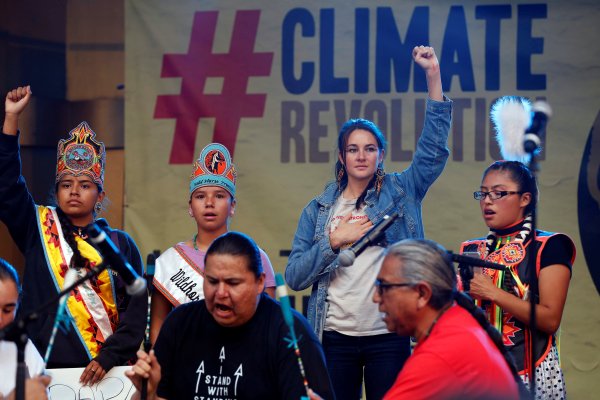 Hundreds in Los Angeles Protest Against Climate Change
Next Up: Editor's Pick