The Boogeyman of Voter Fraud Does Not Exist

Getty Images
Ideas
By William J. Barber II
Barber is president of Repairers of the Breach and co-chair of the Poor People’s Campaign: A National Call for Moral Revival. He is author of We Are Called to Be a Movement.

As early voting opened in my home state of North Carolina last week, Donald Trump continued to dominate headlines, despite Hillary Clinton’s six-point lead in a national poll. The third and final presidential debate covered several areas of substantive difference between the two candidates, and millions of Americans are already voting for the future they want. But Trump remains in the limelight because he refuses to promise that he will accept defeat on Nov. 8.

For months Trump has complained about media bias “rigging” the election against him. In recent weeks, however, a new boogeyman has emerged: voter fraud. Trump contends that the only way he will lose this election is if massive numbers of people who are not eligible to vote manage to subvert the democratic process.

Many want to dismiss Trump’s defiance as an entertainer’s move to keep the camera focused on him until the show ends. But Trump is not alone. Here in North Carolina, we’ve fought unsubstantiated claims of voter fraud for more than three years.

Following the U.S. Supreme Court’s 2013 Shelby decision, which did away with the preclearance requirement for voting law changes, one member of our General Assembly publicly celebrated that the “headache” of the Voting Rights Act had been removed. A “monster” bill that restricted voting was pushed through the legislature and Governor Pat McCrory signed it into law. His justification? Voter fraud.

Promoted by the American Legislative Exchange Council, bills like North Carolina’s HB 589 are often referred to as “voter ID” bills, though ours in North Carolina went far beyond the ID requirement, rolling back early voting and eliminating pre-registration for 16 and 17 years olds, same-day registration, and Sunday voting provisions, which had inspired “Souls to the Polls” campaigns in many faith communities. Our NAACP sued Governor McCrory the day after he signed this bill, but he spent three years and about $6 million of our tax money to try to prove that voter fraud was a real problem. In the end, a federal court found that the law “targeted African-Americans with almost surgical precision.” It was unconstitutionally discriminatory not only in impact but in intent. “Voter fraud” was simply the boogeyman politicians had created to try to justify this betrayal of democracy.

Early voting began in North Carolina last week because the court decided that the voter fraud Trump imagines to be his only obstacle to the presidency is practically nonexistent. When tens of thousands of people marched on Winston-Salem last summer to draw attention to NC NAACP vs. McCrory, citizens here learned that there are precisely 31 documented cases of voter fraud in the United States since 2000. You are more likely to be struck by lightening than you are to succeed at in-person voter fraud in America.

To impersonate another voter in North Carolina, you would need to know their polling location, show up before them, not be recognized and risk a felony conviction and five years in prison by signing their name. What’s more, to have an impact on any race, you’d need to coordinate this risk with thousands of other people without anyone leaking the conspiracy to precinct judges who are appointed, county-by-county, by a bipartisan election board.

Numerous academic studies and federal courts have found that the kind of voter fraud Trump and McCrory have alleged is not credible. They know this as well as I do. Raising the issue at the end of a losing campaign is a cynical attempt to manipulate fear in order to fire up their base. People are not motivated to vote when they don’t believe their candidate can win. But the prospect of “voter fraud” encourages true believers to still get out and fight.

I’m disappointed by the cynicism of a Republican party that will not reject such tactics. But I’m encouraged by the moral movement of Republicans, Democrats and Independents here in North Carolina who’ve fought hard for the right to vote. On the first day of early voting, I spent the day with college students who marched to the polls in order to exercise their right to vote and remind America what democracy looks like. “Our mothers and fathers fought too hard for us to sit this one out,” one of the students said to me this morning. “It’s our time now.” Her willingness to march over a mile and stand in line for an hour helps me believe democracy has a future in America. 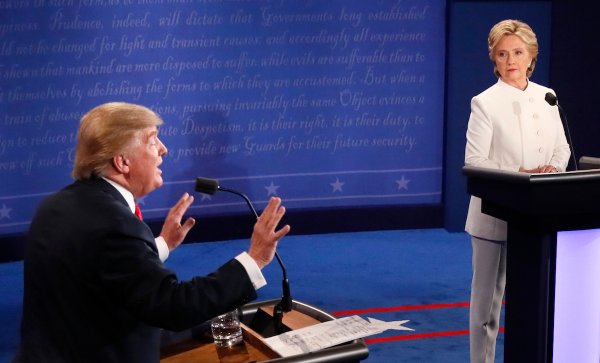 Here's the Other Donald Trump Statement That Would Upset the Founding Fathers
Next Up: Editor's Pick