How The Crown Uses Real History to Make Drama

Turning recent history into a television show would seem to be an easier task than tackling a topic from long ago. But when it came to making Netflix’s new series, The Crown — which tells the story of Britain’s Queen Elizabeth II (an extremely plummy-voiced Claire Foy), beginning with her marriage to Philip Mountbatten (former Doctor Who Matt Smith) in November of 1947 — that situation proved to be both an advantage and an obstacle.

Though the show’s action begins about 70 years ago, the Queen is still the Queen. In fact, she is the longest-reigning monarch in British history.

Now 90, she is one of the few characters on the show — along with 95-year-old Prince Philip and their children Prince Charles and Princess Anne — who still holds today the position she comes into during the course of the show’s action. That meant the production team, under the leadership of creator and writer Peter Morgan, who also wrote the screenplay for the 2006 movie The Queen, had to walk a fine line: The Crown had to be entertaining but also diplomatic.

The solution? Stick as close to the truth as possible. And the truth, it turned out, provided plenty of drama.

“With a drama of this scale,” script editor Edward Hemming told TIME, “where there will be an awful lot of people looking for that level of detail, it was incredibly important we got it right.”

The research team consulted with historians, made use of the British Library, studied news reels, pored over newspaper clippings and read countless contemporary and retrospective biographies, novels and non-fiction.

“Sometimes we would find amazing anecdotes in the biography of a peripheral character,” specialist researcher Annie Sulzberger said. “For example, we know [Prime Minister] Winston Churchill would take a bath while his secretary read to him from the papers, as we depict in the show, because we saw it in a documentary about women who worked for him.”

Indeed, Hemming said, often the scenes that seem the most unrealistic are utterly true. “A lot of the time, you just couldn’t make it up,” he said. “Things like that tremendous scene where King George has a serious operation in the Palace underneath chandeliers, rather than in a hospital, may seem dramatized — but that’s what actually happened.”

The same could be said for a moving scene set in Kenya (but shot in South Africa), where Elizabeth learns of her father’s death while writing him a letter. This coincidence could be easily dismissed as dramatic license, but, Sulzberger said, it’s not: she was writing to him at the time. (Where The Crown takes the most liberties is the matter of timelines, which had to be condensed to fit the action into the right number of episodes.)

When it came to getting the official protocol of the time correct, the team consulted Major David Rankin-Hunt, a former soldier who spent 33 years (from 1981 to 2014) working in Buckingham Palace. Rankin-Hunt worked first as the registrar in the Lord Chamberlain’s Office, where he was responsible for ceremonial activities including state visits, garden parties and swan-uppings, before moving to be the administrator of the Royal Collection, the Queen’s art collection.

“I would correct the actors on little details, for example how a member of the Royal Family would greet the Queen, which was by kissing and then curtsying, rather than nodding,” Rankin-Hunt told TIME. “I also explained that people in the 1950s would not have said ‘morning’; it would have been ‘good morning.’ And, as so many members of the household had served in the forces, they would have held themselves in a formal, dignified way and not slouched like a sack of potatoes.”

Having watched many historical dramas packed with inaccuracies, Rankin-Hunt was keen to ensure the The Crown was as authentic as possible. “Getting the details right on uniform, decorations and medals was particularly important to me,” he said. “Sometimes you see TV shows where someone is wearing their Second World War medals in front of their First World War medals — which is ridiculous!”

Though the show’s team wrote to Buckingham Palace when The Crown was green-lit, production company Left Bank Picture’s head of research Kerry Gill-Pryde told TIME that the team had a “mutual understanding of no relationship” with the Royal Family. And Rankin-Hunt believes there is nothing in The Crown that is in anyway disrespectful to the monarch.

“I wouldn’t dream of trying to predict what the Queen might think of the show, but what I will say is I don’t think there’s anything critical or resentful in it,” he said. “We are portraying a remarkable person who’s given huge service to England. And I think we’ve done that without being sycophantic and hero-worshiping. We’ve just told it as it is.” 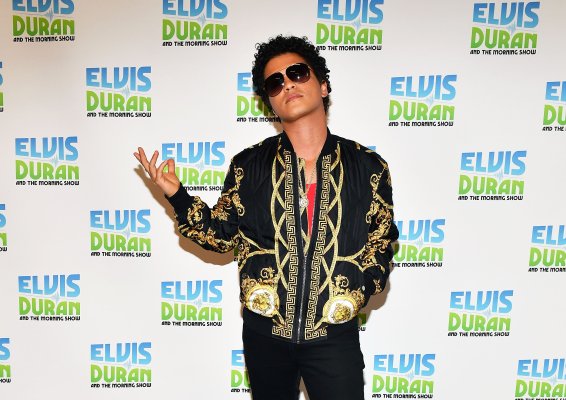 Here's 'Versace on the Floor,' Your New Bruno Mars Slow Jam
Next Up: Editor's Pick