10 Things We Learned From the First Gilmore Girls Trailer

Put down your coffee cups: The first trailer for the Gilmore Girls revival, A Year in the Life, premiering on Netflix November 25, has finally arrived. Here’s everything we learned from the 2 minutes and 26 seconds of footage.

Winter, spring, summer or fall—we’re getting them all! Gilmore Girls: A Year in the Life will consist of four 90-minute episodes. (That’s six hours of Gilmore Girls to digest along with leftover pie when it hits the streaming service the day after Thanksgiving.) Each episode will take place during a different season and give us a glimpse into Lorelai and Rory’s lives.

Emily…is wearing a t-shirt and jeans?

This feels unnatural but perhaps its Emily’s way of mourning her husband Richard, who was played by the late Edward Herrmann. “I was married for 50 years. Half of me is gone,” she says. And she’s not alone.

The Gilmore women are feeling lost

All three generations of Gilmore women feel that they have come unmoored. Richard has passed away, leaving Emily feeling like she doesn’t have a purpose anymore. (Though she does seem to be celebrating his death in her usual over-the-top way with a massive portrait.) We see her sorting through her old things using Marie Kondo’s method: Does this object bring you joy? Apparently her dining room chairs do not.

Lorelai is perhaps the Gilmore most likely to exhibit restlessness. That certainly has not changed. “I thought I knew exactly what I wanted and where I was going. But lately, I don’t know, things seem hazier,” she says in a voiceover. She adds doubtfully: “We’re happy. Luke and I, we’re happy.” Maybe there is trouble in paradise.

Rory is “On the Road-ing it,” as Lorelai puts it. We see shots of a rootless Rory in New York and London. Either Rory’s work is sending her all over the globe, or she’s taking time to reassess what she wants in life. “I’m feeling very lost these days. I have no job. I have no credit. I have no underwear,” she says to—Jess! Which brings me to my next point…

All of Rory’s loves are back

Love ’em or hate ’em, Dean, Jess and Logan all make short cameos in the trailer. Presumably, Rory as an adult and journalist who covered Obama’s campaign trail has moved on from her high school and college boyfriends.

Other people who are back include…

Oh, and Kirk is attending a Gilmore family dinner

And Emily seems to have no idea who he is. A few more stray observations…

Let the conspiracy theories abound: Are Luke and Lorelai in another fight, forcing them to seek out sub-standard coffee? Did Luke get so fed up with some town Christmas tradition that he closed Luke’s for the day?

Someone is using an exercise ball in the Dragonfly Inn

Given the Gilmore’s aversion to exercise, this is a confusing turn of events.

The “Gilmore Guys” podcasts hosts made it into the show

The two guys on their phones behind the man doing sit-ups on an exercise ball are Kevin T. Porter and Demi Adejuyigbe, hosts of the popular fan podcast.

The Gilmore banter has not abated

But the pop culture references have been updated. Ben Affleck’s Batman has made it to Stars Hollow. 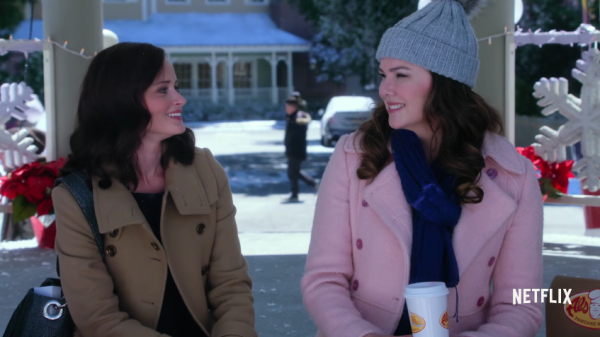 The Gilmore Girls Netflix Revival Trailer Is Finally Here
Next Up: Editor's Pick