Both major party presidential campaigns expressed concerns just hours after the telecom giant AT&T announced Saturday night that it intends to buy the cable behemoth Time Warner for $85.4 billion in a deal that could result in one of the biggest media companies in the U.S.

Republican presidential nominee Donald Trump decried the merger before it was even official, announcing at a campaign rally in Gettysburg, Pennsylvania Saturday afternoon that it would “destroy democracy.” His campaign later issued a statement, steeped in early Twentieth century populist rhetoric, promising that a Trump administration would “break up” and “prevent” such economic consolidation in the future.

Democratic presidential nominee Hillary Clinton’s running mate, Tim Kaine, echoed the sentiment on Sunday, saying on NBC News’ Meet the Press that he was “pro-competition” and that “less concentration… is generally helpful, especially in the media.” Clinton campaign spokesman Brian Fallon also evinced skepticism about the deal, telling reporters that “marketplace competition is a good and healthy thing for consumers.”

“There are a number of questions and concerns that rise in that vein about this announced deal but there is still a lot of information that needs to come out before any conclusion should be reached,” he told reporters on Sunday. “Certainly she thinks that regulators should scrutinize it closely.”

Clinton herself has not yet weighed in on the merger. In an October 2015 op-ed, she promised to “beef up the antitrust enforcement arms of the Department of Justice and the Federal Trade Commission,” and in June, the Center for American Progress, a liberal think tank influential with presumptive Democratic Hillary Clinton, released a report warning of the dangers of corporate consolidation in any industry.

The Trump campaign’s official response to the proposed AT&T-Time Warner merger cited President Teddy Roosevelt’s famous trust-busting efforts in the early 1900s and hit broadly populist notes. But the message was also purely Trumpian: The billionaire businessman’s reason for opposing the merger appeared to be, at least in part, related to his distrust of mainstream media, which he has blamed in recent months for “rigging” the election in his opponent’s favor. CNN, one of this longtime punching bags on the stump, is owned by Time Warner. (TIME was owned by Time Warner until 2014, when Time Inc. became an independent company.)

“Donald Trump will break up the new media conglomerate oligopolies that have gained enormous control over our information, intrude into our personal lives, and in this election, are attempting to unduly influence America’s political process,” the campaign’s statement read.

Both major parties’ campaigns’ decision to distance themselves from the deal is an indication of a rising and powerful populist sentiment among voters on both sides of the ideological aisle this election season.

Since late 1970s, the two federal agencies primarily tasked with preventing monopoly control, the Department of Justice and the Federal Trade Commission, have systematically scaled back their anti-trust enforcement actions on the grounds that the bigger the company, the more efficient it is. Large corporations, like Walmart, for example, are able to keep consumer prices low by negotiating lower prices with suppliers.

But in recent months, as economic populism has swept the American electorate on both the right and the left, Republican and Democratic lawmakers have renewed attention to the problem of monopoly. Last year was the biggest year for corporate consolidation in U.S. history, with $3.8 trillion dollars worth of mergers and acquisitions.

In March, a handful of Republican lawmakers, including Tea Party hero Utah Sen. Mike Lee, argued at a Senate Judiciary subcommittee hearing on antitrust oversight, the first meeting of that committee in three years, that the FTC and Justice Department were not doing enough to even the economic playing field.

In April, the White House issued an executive order reminding federal agencies to take actions that would promote competition. “Certain business practices such as unlawful collusion, illegal bid rigging, price fixing, and wage setting, as well as anticompetitive exclusionary conduct and mergers stifle competition and erode the foundation of America’s economic vitality,” the report read. The Obama administration has also scuttled proposed mergers between AT&T and T-Mobile, Sprint and T-Mobile, and Pfizer and Allergan.

Federal regulators will have to approve the merger of AT&T and Time Warner before it is allowed to proceed.

In a statement late Saturday night, AT&T and Time Warner announced that their union was a “perfect match” and would “bring a fresh approach to how the media and communications industry works.” 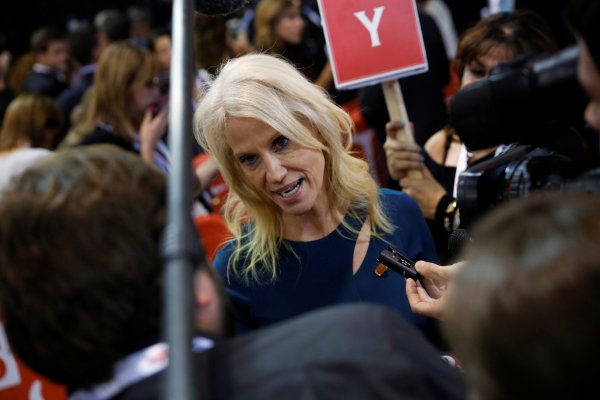 Kellyanne Conway Acknowledges Donald Trump's Dip in Polls: 'We Are Behind'
Next Up: Editor's Pick