Darkness at Noon: ISIS Sets Oil and Sulfur Fires in the Battle for Mosul

Here in the Iraqi town of Qayyarah, in the desert south of Mosul, the sun is an orange orb burning through a screen of black and gray clouds that cover the sky. The sky at midafternoon is the color of dusk, and the air is painful to breathe. Retreating ISIS fighters have set fire to oil wells as well as a sulfur plant in the area, sending up plumes of toxic black and white smoke that blanket the sky and burn the lungs.

Some of the oil fires have burned since last summer. On Friday, Islamic State fighters reportedly torched the Mishraq sulfur plant, north of Qayyarah. At least two civilians died from the effects of the gas.

The attack on the sulfur facility came days after Iraqi forces launched an offensive to retake Mosul, threatening the largest city under Islamic State control. The toxic pall south of the city underscores the jihadists’ ability to render portions of Iraq unlivable even as their self-proclaimed caliphate contracts.

At a checkpoint on the road leading north from Qayyarah toward Mosul, Iraqi soldiers hand out cups of sugary tea to passersby, joking and carousing with each other under a dark sky. Standing in front of the tea stand, Buha Hamid, a soldier from western Iraq’s Anbar province describes the scene near the sulfur plant. “There was white smoke everywhere, people were suffering,” he says. “They want to destroy everything,” he says of ISIS.

The sulfur cloud spread over an area of about 5 sq km, forcing the evacuation of about 200 families, according to an Iraqi army official on the scene who asked not to be named in keeping with military protocol. Some Iraqi soldiers leaving the area wore surgical masks or gas masks. At the nearby Qayyarah West airfield, a key American operations center in the Mosul campaign, U.S. troops also reportedly donned protective gear. As many as 1,000 people were hospitalized after inhaling the gas, according to Reuters.

Displaced Iraqis arrive at a refugee camp on Oct. 22, 2016, in the town of Qayyarah, south of Mosul
BULENT KILIC—AFP/Getty Images

Around Qayyarah, everyday life takes on a surreal appearance as residents attempt to piece back together a town broken by ISIS rule and a battle in July that forced many residents to flee. In a field on the outskirts of town, a shepherd herds a flock of sheep, their wool turned black from the soot. Heading to their home near the front lines, a family of five drive through town, a white flag flying from one window.

“When we go to sleep we’re clean, but when we wake up our faces are dark. The color of everything in our house has changed,” says Shaker Ibrahim Khalifa, 42, a butcher from Qayyarah. His store remains open, slaughtered animals hanging up in spite of the soot in the air. He remained in the town during the two years that it was ruled by ISIS, and is afraid of leaving in part because of the stigma attached to ordinary people, usually Sunni Muslim Arabs, who managed to survive under ISIS. “If it continues like this we’ll leave, but the problem is, everywhere we go now, people will say, ‘You’re with ISIS.’”

As the butcher speaks, another man in a military uniform and a red beret approaches with a small child in his arms. “My child has a problem in his lungs,” the man says. His name is Ahmed Najm Abdullah, and he’s a member of the Hashd al-Watani, a localized, predominantly Sunni armed force allied with the military in the fight against ISIS. He is driving a large family in a small flatbed truck toward their home in a village near Qayyarah. The tiny boy begins to cry. “The problem in his lungs began when the sulfur started burning,” he says. His village was recently retaken from ISIS. “The situation is still unstable, so I can’t get treatment for my kids.” 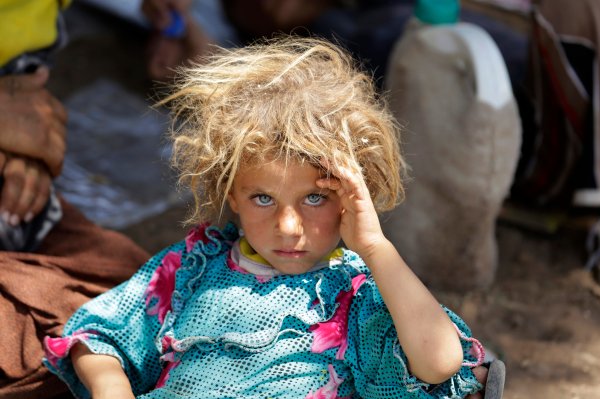 Couple Who Rescued Yazidi Girls From ISIS Given Top Award
Next Up: Editor's Pick