Hillary Clinton Should Embrace Her Centrism

Democratic presidential nominee Hillary Clinton listens to Republican presidential nominee Donald Trump speak during the third U.S. presidential debate on October 19, 2016 in Las Vegas, Nevada.
Joe Raedle—Getty Images
Ideas
By Gil Troy
Troy is a professor of history at McGill University and the author of The Age of Clinton: America in the 1990s.

When I say to my students, “Donald Trump promises to…” they all shout “make America great again!”—even if most hate him. When I say “And Hillary promises…” I get a few “Stronger Together” replies, but mostly awkward silence. After three debates and 30 years in politics, Hillary Clinton’s political identity remains mysterious.

Trump’s campaign is a baloney sandwich, which may have gone bad. Clinton’s is a donut—sprinkled with sweets for different constituencies, but lacking a center. To fix this, Hillary Clinton should stop running away from Bill Clinton’s legacy. Defending Clintonism will make her look bolder, shape a mandate if she should win and attract the centrist swing voters she needs to win.

For all his slickness, Bill Clinton was as ideological a president as Ronald Reagan. By the 1980s, many Democrats wondered how Lyndon Johnson’s liberal reforms produced such a cultural trainwreck, with crime, violence, drug abuse and family breakdown growing as government did, too. At once doubting big government and rejecting Ronald Reagan’s anti-government rhetoric, Bill Clinton’s centrist synthesis revitalized liberalism.

Mr. Clinton’s “Third Way,” which fused opportunity, responsibility and community, shaped his greatest domestic achievements as president. Republicans talked about balancing the budget—Clinton delivered, eliminating the deficit by 1999. With more than 43 million crimes committed in 1993 alone, Americans couldn’t trust a government that couldn’t even protect them. Clinton believed his crime bill would save liberalism by centering it. To show he wasn’t race-baiting, Clinton addressed African Americans directly as victims of crime, six times more likely to be murdered than whites.

Two decades later, with crime down and incarceration levels up, especially among minorities, it’s easy to overstate the bill’s harshness and impact. The federal prison population had already risen by 239.9 percent in the 14 years before the 1994 act’s passage, and, today, the federal prisons the law covered only house 13.5 percent of America’s prison population.

Similarly, Clinton’s welfare reform made sense back then. Taught by the sociologist William Julius Wilson that black poverty stemmed from deindustrialization more than racism and moved by constituents who resented the welfare stigma, Clinton ran for president promising to “end welfare as we know it.” After capturing Congress in 1994, Republicans pushed aggressively for “workfare,” trying to return recipients to the job force. They proposed block grants for each state along with a five-year lifetime limit on receiving welfare.

In 1996, Clinton passed welfare reform, with all its flaws, by forging a bipartisan coalition. Two-thirds of African-Americans supported a five-year limit for receiving welfare.

Still, blaming persistent poverty or mass incarceration on one mid-‘90s law is simplistic. Clinton’s reset restored many Americans’ faith in government. He detoxified the crime and welfare issues by shifting the debate so far leftward that he is now bashed for not eliminating violence, racism and poverty.

America’s pied piper president benefited from governing after the Cold War ended and during 116 months of continuous growth, America’s longest peacetime economic expansion. “Did I solve every problem? No,” Clinton said recently. “Did I get caught trying? You bet.”

Sloppy, self-righteous, self-indulgent, Bill Clinton frequently failed, too. His scandal-scarred and potholed presidency polarized Americans, fueled the mortgage crisis and the deregulation that exploded in 2008 and, as he himself said, “failed” to neutralize Osama bin Laden before 9/11.

Nevertheless, Secretary Clinton shouldn’t ignore President Clinton’s political role-modeling and policy achievements. Hillary Clinton should build on her family legacy. Noting where to improve it will define her. She should stop fearing defections from Bernie Sanders voters on the Left and woo swing votes in the center. Today’s party-fluid voters are independent, pragmatic and worried about the economy. Memories of Bill Clinton’s centrist aspirations and 22 million new jobs should appeal to these Selfie Voters.

Hillary Clinton’s trust problem goes far beyond emails. “Stronger Together” and “I’m with Her” are Hallmark Card sentiments, not a governing philosophy. If Hillary Clinton cannot define an ideology, questions about her political character—not just her personal character—will continue to haunt her. 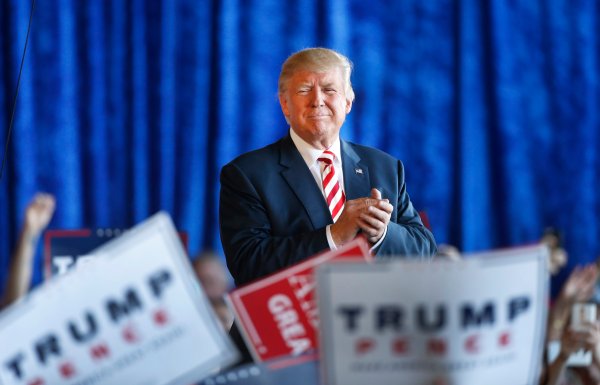 How Republicans Will Survive Being Taken Hostage by Donald Trump
Next Up: Editor's Pick