Donald Trump’s refusal to commit to accepting the results of the vote at the third presidential debate led to widespread criticism that he was breaking with a norm of American politics that dates back to the 18th century. But amid the uproar, many missed another comment that would have upset the framers of the Constitution.

Criticizing Democratic nominee Hillary Clinton over her private email server, Trump said that she shouldn’t have been allowed to run for president in the first place.

“It’s crooked — she’s — she’s guilty of a very, very serious crime. She should not be allowed to run,” he said. “She should never have been allowed to run for the presidency based on what she did with e-mails and so many other things.”

Trump’s statement, which he has repeated at rallies, seems to misunderstand a major feature of the Constitution’s rules on who should and shouldn’t be able to run for president.

The words in the Constitution that set forth the rules of presidential eligibility (found in Article II Section 1 Clause 5) are pretty sparse: “No Person except a natural born Citizen, or a Citizen of the United States, at the time of the Adoption of this Constitution, shall be eligible to the Office of President; neither shall any person be eligible to that Office who shall not have attained to the Age of thirty five Years, and been fourteen Years a Resident within the United States.”

Though the “natural-born citizen” part has caused some trouble over the years, it’s pretty clear from the records of debate at the constitutional convention as well as the Federalist Papers that the men writing the Constitution didn’t actually want many limits on who could run for president.

Their main concern at the time was making sure that the new office of the chief executive didn’t come to resemble a kingship. Many were already uncomfortable with the amount of power vested in the position, and they sought to use their experience with European monarchs to avoid creating a presidency that would undermine democracy. As constitutional scholar Akhil Reed Amar explains in America’s Constitution: A Biography, the age limit was anti-dynastic, meaning that “favorite sons” of famous people would have to prove their own worth before being able to coast into office on the strength of their parents’ reputations. The citizenship and residency restrictions are even more obviously democratic, meant to prevent rich foreign aristocrats from seeing the young country as a place where it would be easy to gain power.

Other than that, it’s up for grabs. As Alexander Hamilton put it at the Constitutional Convention, adding “minute restrictions” on holding office would be “embarrassing” to the government; James Madison seconded that idea, saying that it was important to “maintain the character of liberality which had been professed in all the Constitutions & publications of America.” (On that particular day, they were discussing qualifications for the legislature, but the point still holds.)

So some common barriers to holding office—property requirements and religious tests, for example—aren’t mentioned, a notable omission at that time. The Founding Fathers wanted the presidency to be relatively easy for any American to seek.

Must-Reads: Choose any one exclusive book from the TIME History collection with your paid subscription to TIME

When it came time to debate the qualifications for presidency, James Madison specifically cites in his notes a July 1787 discussion about how the office ought to be filled. It’s clear from those notes that the Constitution’s drafters were extremely concerned about getting a qualified president—but that most of their concerns lay with the question of who would be allowed to vote, not with who would be allowed to run. In other words, as Gouverneur Morris put it, “If qualifications are proper, he wd. prefer them in the electors rather than the elected.”

John Dickenson is also identified as being against a “recital of qualifications” being included in the Constitution, making the point that any such list will be necessarily incomplete and thus problematic. And that’s O.K., Dickenson points out, as long as the voters can be trusted. If the voters couldn’t be trusted, he added, the problem was beyond fixing.

And in fact, the precise qualification that came up in Wednesday’s debate has been put to the test. Though Hillary Clinton has not been found guilty of any crime, despite Trump’s assertions, people who have been convicted of crimes are allowed to run for president—and in fact have done so from jail. (In parallel with the founders’ concerns about “the electors rather than the elected,” those convicted of crimes don’t always have the right to vote, even if they can run.)

The most famous example of a jail-bound candidate probably comes from the 1920 presidential race, when Eugene V. Debs ran for office from the federal penitentiary in Atlanta, where he had been sent for violation of wartime espionage laws for his vocal opposition to World War I. Debs was a perennial nominee from the Socialist Party, and his imprisonment did not dampen his party’s enthusiasm for their candidate. In fact, one of his supporters’ slogans was “from prison to White House.” A campaign button even bore the phrase “For President…Convict No. 9653.”

Debs received more than 900,000 votes. He was defeated by Warren Harding, who freed him from prison in 1921, the same year the sedition law that had been used to imprison him was repealed. 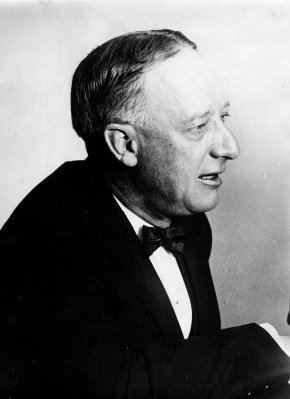 What You Should Know About the Man Behind the Alfred E. Smith Dinner
Next Up: Editor's Pick