Beijing's Adroit Diplomacy Is Isolating the U.S. in Asia

As Hillary Clinton and Donald Trump battled it out in the final U.S. presidential debate, China was busy rolling out the red carpet for an unlikely guest: Philippine President Rodrigo Duterte, who was on a four-day tour of the world’s second largest economy. The Asian state visit may have been overshadowed by American campaign rhetoric but it carried great geopolitical weight. At a business forum in Beijing’s Great Hall of the People on Thursday, Duterte, who took office in June, announced his nation’s “separation” from the U.S. “Both in military, not maybe social, but economics also,” he said, “America has lost.”

It was a stunning statement from the leader of one of the world’s most pro-American nations, which is bound to the U.S. by a seven-decade-old defense alliance. The setting was also momentous: in recent years, few bilateral relations have been as acrimonious as those between China and the Philippines, which were poisoned by competing territorial claims in the South China Sea. In July, China excoriated the Philippine government, under Duterte’s predecessor Benigno Aquino III, for filing — and winning — a case with an international tribunal that rubbished China’s South China Sea claims. The People’s Daily, the mouthpiece of the Chinese Communist Party, opined that “a U.S.-led conspiracy [was] behind the farce.”

Now, Duterte has agreed to talks on the South China Sea with China, which showered the visiting Philippine President with promises of $13.5 billion in trade deals. “I’ve realigned myself,” Duterte told his hosts on Thursday, “in your ideological flow.” Even though Beijing has built artificial islands that double as floating military bases in contested South China Sea waters, Duterte noted on Wednesday that China “has never invaded a piece of my country all these generations.” He went on: “During the Cold War, China was portrayed as the bad guy [but] … what we have read in our books in school were all propaganda produced by the West.”

And that wasn’t all. “Americans are loud, sometimes rowdy. Their larynx is not adjusted to civility,” he added. “They are a very discourteous people.”

In an earlier interview with China’s state broadcaster CCTV, the combative Philippine leader, who has repeatedly referred to U.S. President Barack Obama as a “son of a whore,” said that “the only hope of the Philippines economically, I’ll be frank with you, is China.” By contrast, Duterte said in Beijing that he no longer considered the U.S. — which once colonized the Philippines and is hoping to resuscitate its military presence in the Southeast Asian nation — a trusted partner. “Your stay in my country was for your own benefit,” Duterte said about the U.S., to a group of Filipino expatriates in Beijing. “So time to say goodbye, my friend.”

Duterte likes his politics to shock. His Cabinet members and top advisers have professed surprise about his defense and foreign policy statements — and spent Thursday evening attempting to soften his anti-U.S. language. But the Philippine President’s turn away from the U.S. toward China is not unique in Asia, and it is troubling news for a superpower that made a “pivot” to Asia a cornerstone of foreign policy. “We are going to be seeking an explanation of exactly what the president meant when he talked about separation from the U.S.,” said U.S. State Department spokesman John Kirby on Thursday. “It’s not clear to us exactly what that means in all its ramifications.”

Even as quagmires in the Middle East proliferated, Obama championed his Asian pivot as a fresh policy initiative for a fresh century. During a 2011 trip to Asia, which had long felt ignored by George W. Bush’s administration, Obama vowed: “The United States is a Pacific power, and we are here to stay.” Clinton, then serving as U.S. Secretary of State, dubbed the 21st century “America’s Pacific Century.” In fact, her first trip abroad as Secretary of State was to Asia.

The pivot, later downgraded to a less vigorous “rebalance,” did reap some rewards, even if China saw it as nothing but containment. Showing up for various regional conferences proved, at the very least, that America hadn’t forgotten about Asia. New friendships were forged. Vietnam and the U.S., for example, are now far closer than at any point in the four decades since American soldiers exited an unwinnable war. (Vietnam, along with other regional claimants, has pushed back against China’s contention that it owns roughly 90% of the South China Sea.) In Burma, known officially as Myanmar, Washington has cheered as the political party of democracy activist Aung San Suu Kyi won elections — and a junta that had once cozied up to Beijing began distancing itself from certain Chinese investments.

But with the U.S. distracted by the Middle East, not to mention mired in the most acrimonious presidential election in generations, the Asia pivot has failed to sustain relations with some of the Washington’s longest-standing allies in the region. In the case of the Philippines, local officials wondered why the U.S. did not speak out or act more forcefully when China began its island-building campaign in the South China Sea. “The U.S. under Obama was the one that raised our expectations with its pivot to Asia,” says Clarita Carlos, a political analyst and former president of the National Defense College of the Philippines. “But we discovered that the U.S. did not put meat into its declaration.” Since taking office in June, Duterte has responded by suspending joint military patrols with the U.S. in the South China Sea. He has also talked about buying Chinese weapons to fight terrorism back home.

If geopolitics is a zero-sum game, American inattention — or at least dashed Asian hopes — may be to China’s advantage. “In East Asia, the U.S. talked too much and did little,” says Gong Shaopeng, a professor at China Foreign Affairs University in Beijing. “Since President Xi [Jinping] has been in power, he has attached great importance to relations with Asian countries. Now we are seeing some good results.”

In Thailand, where the military took power through a 2014 coup, junta leader Prayuth Chan-ocha began joint military exercises with the Chinese last year. For a nation that once served as a staging ground for U.S. military operations in Vietnam, this defense cooperation with China felt like a turning point. Even though Thailand is still bound by a U.S. defense alliance, the Thai government has also agreed to buy Chinese submarines. Thailand’s enhanced military relations with China occurred just as Washington suspended military aid to Bangkok because of American concerns over the junta’s power grab. But Thailand’s outreach to China predated this diplomatic slight. “Long before the pivot, there was a sense that the Thai-U.S. military alliance had lost its relevance,” says Michael Montesano, an expert on Thailand at the ISEAS-Yusof Ishak Institute in Singapore.

Thailand’s military-run government has deported Chinese-born dissidents and refugee applicants, ignoring an international outcry over Beijing’s lack of due process. Last month, Hong Kong political activist Joshua Wong was denied entry to Thailand for a conference. It’s hard, perhaps, to ignore the economic reality that China is, like with so many Asian nations, Thailand’s largest trading partner. Amid a foreign-investment slump following the 2014 putsch, China has continued to invest in Thailand, not only with a flood or tourists but with infrastructure projects as well.

Even Japan, which prides itself as the U.S.’ strongest ally in Asia, has been disappointed by the pivot — and the role that Asian democracies have played in U.S. presidential politics. Japan hosts nearly 50,000 American troops on its soil and is tied to the U.S. by a mutual defense treaty. So when Trump said in a debate that Japan (along with nations like South Korea and Germany) “should be paying us, because we are providing tremendous service,” Japanese wondered if he’d forgotten about the almost $2 billion per year Tokyo gives Washington to maintain the U.S. military presence. “We can’t defend Japan,” Trump has said, chilling words for a nation that views with increasing alarm China’s growing economic and military power.

In Thursday’s debate, Clinton again reassured Japan and defended the U.S.’s treaty obligations with its Asian allies. But as Trump has attacked trade deals for stealing American jobs, Clinton has also tacked against globalization. While she was Secretary of State, Clinton championed a key component of Obama’s Asia pivot, the 12-nation Trans-Pacific Partnership (TPP) trade deal. But she now says she no longer supports the pact, which needs to be ratified by the U.S. Congress.

That’s bad news for Japan, the world’s third largest economy. Partly under American pressure, Tokyo declined to sign up for a new Chinese financing initiative called the Asian Infrastructure Investment Bank. What happens if TPP is also off the table? In September, the usually diplomatic Japanese government issued a scathing 15-page critique of the populist isolationism that led to Brexit. “Success or failure” in ratifying TPP, warned Japan’s Prime Minister Shinzo Abe last month, “will sway the direction of the global free trade system, and the strategic environment in the Asia-Pacific.”

Of course, China’s economic sway in the region may be undercut by its increasingly assertive foreign policy. Last month, the Global Times, a Chinese Communist Party–linked tabloid, railed against Singapore for allegedly pushing to include the topic of the South China Sea territorial disputes in a joint statement issued at the Non-Aligned Movement summit. Singapore’s ambassador to China fired back, saying that the Chinese media report was “false and unfounded.” The Southeast Asian city-state, which has long invested in China, did not appreciate Chinese criticism, even if it has provided a deployment base for U.S. military craft that patrol the South China Sea.

An opinion poll published this week in the Philippines showed that the public still trusts the U.S. more than China. Nor has Duterte, a firebrand with a knack for insulting many a world leader, been consistent in his attitudes toward Beijing. During the Philippine presidential campaign earlier this year, Duterte vowed that he would ride a jet ski to disputed South China shoals and isles in order to protect Philippine interests. For all of his criticism of the U.S., Duterte has not yet turned his back on an agreement to give American soldiers access to bases in the Philippines. The Philippine electorate may push back on their leader’s anti-Americanism and urge him to defend what they consider Philippine territory in the South China Sea, even if increased trade with China is welcomed.

Nevertheless, Chinese foreign policy analysts see the weight of history in Beijing’s favor. For centuries, Asian nations paid tribute to Chinese emperors, who controlled the world’s richest civilization. The U.S., by contrast, is a recent interloper. “Now it’s time for China to restore the relationship, like in the old times,” says China Foreign Affairs University’s Gong. “For Asian countries, they have to come close to China. There is no other choice for them.” 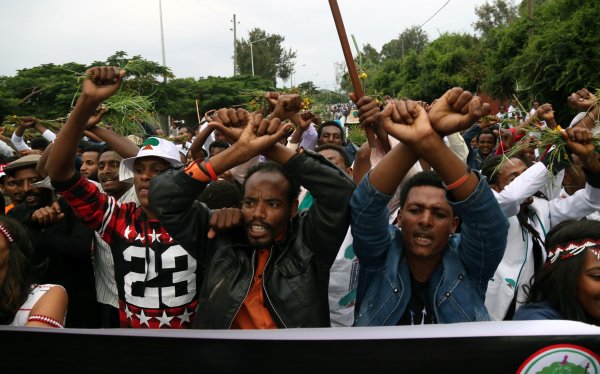 1,600 Detained in Ethiopia Under State of Emergency
Next Up: Editor's Pick