Why You Shouldn’t Laugh at Donald Trump’s Hands

I’m a short-fingered vulgarian. Or at least I’m short-fingered—along with my digits, my wealth and power are minuscule, and I like to think of myself as somewhat refined. Yet I do have small hands and, to match, feet sized six-and-a-half. (A lot of companies don’t offer men’s shoes that low.)

Up until Trump was shown in an unearthed 2005 video to have said that he believed he can grab women “by the p-ssy,” while detailing his attempts to seduce a married woman, “short-fingered vulgarian” was what seemed to bedevil Trump the most, at least in his own head. It was a term that Vanity Fair editor Graydon Carter concocted to describe Trump when Carter ran the now-shuttered magazine Spy. The term wormed its way into Trump’s mind and gnawed. It has not left. As Carter wrote in November 2015, he still receives mail from Trump disputing the claim:

Even if you believe Trump when he said in his scripted quasi-apology for the tape that “these words [from 2005] don’t reflect who I am,” his hatred of criticism of his short fingers does reflect who he is. It reveals the definition of toxic masculinity he’s adopted and clung to. (Though not one he originated.) It is the same toxic masculinity that leads directly to the words he said in 2005 and many other times. And it is also one his detractors still rely upon.

If how we speak about those we think the least of reveals the most about who we are (as it could for Trump in regards to how he speaks about women, Muslims and democracy itself, to name a few), then how people who despise Donald Trump speak of him reveals the same about them.

The size of Trump’s hands has come up in many settings. In March, Senator Marco Rubio made an insinuation about the subject in a debate designated to determine which Republican nominee displayed presidentiality. Statues depicting a nude Trump, placed in public spaces by anarchist collective Indecline in August (and appearing again outside the third debate in Las Vegas), boasted diminutive features.Professional comedians like John Oliver have dispatched it. On October 20, BuzzFeed released a font in Trump’s script; it’s titled Tiny Hand. New York Times columnist Nicholas Kristof used it in the first sentence of his story about Jill Harth, who says Trump sexually assaulted her. (Whether Kristof intended to showcase the triviality of the hands issue by juxtaposing it with the gravity of Harth’s accusation is muddied by the innuendo packed into short-fingeredness.)

Short fingers are, well, shorthand for a man lacking sexual prowess. The thinking goes: Small hands or feet signify a man has a short penis, which cannot satisfy a woman; he is, therefore, fundamentally a failure. (We know that Donald Trump feels this way about the comment because of his hamfisted response to Rubio, which made the connection: “Look at those hands, are they small hands? And he referred to my hands—’If they’re small, something else must be small.’ I guarantee you there’s no problem. I guarantee you.”) Whether or not any of this is true (the science seems to say it’s misguided or oversimplified) matters little. If enough people think something, it has power.

There is a lot tied up in that mangled logic: That a man’s worth is sexual; that his sexual function depends on his physicality; that his worth, therefore, depends on his body. This is something boys learn early and, for years—maybe even a lifetime—it comes to define how they valuate each other and themselves. Like breasts, hands are readily apparent for people of either gender to prey upon. (Hand- and foot-size have become so gendered that girls get ridiculed for being mannish if they have larger extremities.) Friends even use it against one another. It becomes internalized. That’s part of why Carter’s well-deployed worm found in Trump’s mind such fertile ground to feast upon.

There is a connection between this belief about men and the remarks Trump regularly makes about women: If you make sexual prowess an important indicator of masculinity (and by extension, someone’s overall capacity for basic human acts), then openly question someone’s ability to have it, there should be little surprise to hear that guy bragging about his ability to “do anything” to women—to claim all-powerfulness. And what displays more power than taking what is not yours? Herein is a seed of rape culture unwittingly planted by many advocates against its poison.

This connection does not excuse Trump. How engrained in him is the importance of disproving a genetic fact shows how unevolved his view of masculinity is—and how poor a standard he would set. There are numerous factors that contribute to the scourge of sexism, conscious, unconscious and institutional. Penis innuendo ranks low among them; plenty of vulgarians have long fingers. And people should be judged by their ability to overcome the wrong done to them and to think through the meanings of what is said to them. But communities should be judged by their ability to recognize the malignant influence something can have on impressionable people, then work to stop it. The people making the jokes and delighting over pointing out an unchangeable physical feature are not helping.

I appreciate the art of the perfect insult—either in jest or to inflict mind-consuming harm. I also know the shock of fear and frustration that reverberates when a small-hands or small-feet barb hits you. It leaves you, while wearing shoes too big and feeling terrified of going bowling or even just taking off your footwear when you enter someone’s house, with the sense that you’re damned to a lifetime of incapability. It took me a long time, which lingered into young adulthood, to realize this was wrong, that this wasn’t my fault.

Small hands are genetic. So are small feet. So is a small penis. As is any combination thereof. I can’t eat healthily perform push-ups and have my fingers lengthen. I can’t read a book and see my soles upsize. I can’t be kind, then watch my genitalia grow. Altruism and anatomy don’t correlate.

Genetics are a vulgar source of comedy. As late-night comedian David Letterman recently told the Times, one of the first things he would say to Trump today would be, “What gives you the right to make fun of a human who is less fortunate, physically, than you are?” Letterman was referring to how Trump mocked New York Times reporter Serge Kovaleski, in an impersonation, for Kovaleski’s arthrogryposis, a congenital disorder. (Trump denied this in the third presidential debate. He lied.)

Trump has no high ground—especially not with how frequently he appraises women based on the size of their breasts, especially not with the litany of unfounded and unfair disparagements he’s made against many kinds of people. And he deserves his share of ridicule—especially about his childishness, as Alec Baldwin on Saturday Night Live has shown so well these recent weeks, like in one skit when the fictional Trump responded to former Republican nominee Carly Fiorina’s renunciation of Trump by saying “She’s a four” and then called his running mate Mike Pence “puny Pence.” Same goes for his manic oblivion—which SNL highlighted by having the fictional Trump doubling down on bragging about his sexual ability.

But every time you quip like Donald Trump does—and he has given no reason to believe he wouldn’t joke about a different Donald Trump’s hands—you reveal a streak of that same character in yourself. You tumble closer to the bottom of the pit where Trump resides. And by signaling your comfort in saying it, you give tacit permission to others to do the same. Quickly, we all find ourselves lower than before. I’m offering my hand. 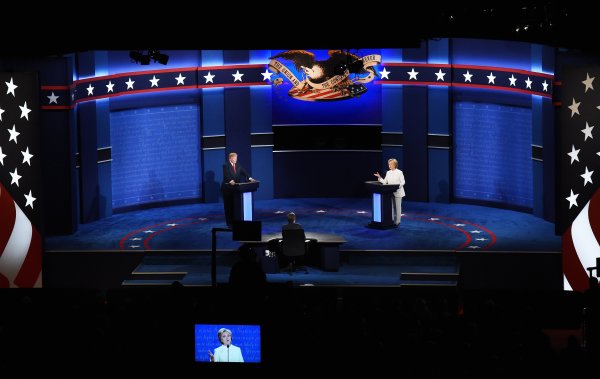 A Brief History of Handshakes at Presidential Debates
Next Up: Editor's Pick