The first U.S. casualty in the offensive against ISIS in Mosul occurred on Thursday, as a coalition of Iraqi forces engaged in fierce fighting with ISIS militants defending the caliphate’s largest redoubt in Iraq.

The intensity of the fighting indicates that the jihadists are mounting a serious attempt to resist the offensive, rather than opting for a tactical retreat that would preserve some of their fighters for future battles. At the front lines in the towns ringing Mosul, forces loyal to the Iraqi government, Kurdish troops and others are facing a lethal defense centered around suicide bombers, snipers, and improvised bombs. The coalition forces are still advancing in spite of the jihadists’ attempt to block the most serious threat to their caliphate since they seized huge swathes of Iraq in 2014.

“We saw the ISIS snipers and they’re not fleeing. They’re fighting. They’re resisting strongly,” says Col. Falah Fadel Jasem, an Iraqi special forces commander leading troops who pushed toward Mosul on Thursday on the main road leading from the city of Erbil, the Kurdish regional capital and the main springboard for the offensive.

The colonel said ISIS had deployed 15 suicide car or truck bombs against his forces on Thursday alone. Two of the vehicles had been destroyed by airstrikes, the other 13 by the elite troops on the ground. They also encountered more than 50 improvised explosive devices (IEDs) likely laid by ISIS troops, while a single sniper wounded four of his men who lay in a medical station positioned far behind the front lines. None had been killed as of late on Thursday afternoon. They succeeded in entering the town of Bartella, about eight miles east of Mosul. “They’ve been planning for this war,” Jasem says of his ISIS opponents.

Iraq’s Prime Minister Haider Abadi said on Thursday that the offensive was proceeding faster than planned, citing early military advances, but the reality of the fighting on the ground has been bloody and sometimes chaotic. The U.S. soldier killed on Thursday died his wounds sustained in an improvised explosive attack, according to the Pentagon. The soldier is the fourth U.S. service member to have been killed since the start of Operation Inherent Resolve in 2014, which is focused on fighting ISIS in Iraq and Syria.

On Thursday morning Kurdish fighters opened a multi-pronged attack on Mosul’s eastern flank, marking an escalation of the offensive. Kurdish militias swept down a mountainside toward Mosul in the early morning, aiming to seize a series of villages outside the city. At one point on the front, Kurdish Peshmerga fighters rolled toward the village of Tizkharab in a column of armored pickups, Humvees and tanks. In the morning, they secured their position on the outskirts of village.

More vehicles and soldiers on foot soon joined them, taking up positions on a dirt embankment. The ISIS fighters fought back, unleashing mortars, sniper fire, and suicide car bombers, which exploded in the open ground, neutralized by heavy machine gun fire by the Kurdish forces. The Kurds also responded with tank rounds, each launched with deafening explosions. At one point, dozens of Kurdish fighters piled back in their trucks and pulled back from the front, leaving a smaller, more committed force to fight. By sundown, the fight was still raging, the village not yet secured.

In the opening days of the Mosul operation, the regular Iraqi military—which was routed by ISIS in the summer of 2014—also faced significant resistance from the jihadists toward the south of the city. The army was hit with multiple car bombs in the town of Gwer. In the newly reclaimed village of Abbasi, ISIS managed to push the army back, before government troops retook it again.

The intense fighting in the initial moments of the campaign suggests that the battle for the city of Mosul itself, where hundreds of thousands of civilians remain trapped under ISIS control, could be even more difficult. The dense urban space of the city will likely provide the entrenched militants with a defensive advantage over advancing government troops. “It won’t be easy,” says Lt. Tania Hassan, a platoon commander leading Kurdish forces in the Bashiqa area. “Every day is a trap. Everywhere there are IEDs.” 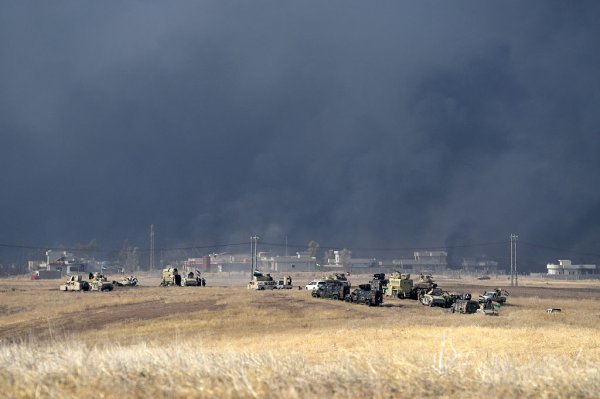 These 5 Cities Matter Most in the Fight Against ISIS
Next Up: Editor's Pick