The True Story Behind Hacksaw Ridge

During the most harrowing moments of Hacksaw Ridge, Mel Gibson’s new drama about the first conscientious objector to win a congressional medal of honor, Andrew Garfield’s Private First Class Desmond Doss seeks the aid of a higher power: “Lord, please help me get one more.” Doss, a Seventh-Day Adventist who refused to bear arms but enlisted as a medic in the U.S. army, is on the battlefield on Okinawa in the spring of 1945. Armed with nothing but a bible, he’s carrying his wounded comrades to safety, one by one, through enemy fire, repeatedly beseeching God to “help me get one more.”

The words that emerge from Garfield’s mouth are, in fact, the same words the real Doss uttered on the Japanese island more than 70 years ago—and, indeed, much of the plot is faithfully drawn from Doss’ life. (He died at 87 in 2006.) Screenwriter Robert Schenkkan, who wrote the first draft (co-writers include Randall Wallace and Andrew Knight), based the story on military records and footage of interviews with Doss, though finding ample material proved challenging because his subject’s modesty made him averse to the limelight.

The number of lives Doss risked his own to save is under debate—he estimated it at 50, the military insisted it was closer to 100, so they settled on 75—but Gibson’s movie doesn’t concern itself with those details. Instead, it focuses on the upbringing that shaped Doss’ convictions and the gruesome battle that compelled him to put them in action. The result is not for the faint of heart—one reviewer called the movie’s close-ups of spilled-out entrails and flesh-eating rats “sadistic,” “outlandish savagery”—and its depiction of World War II may be the hardest to shake from memory since Saving Private Ryan nearly two decades ago.

Here’s where Hacksaw Ridge, out Nov. 4, stays true to Doss’ story and where it takes some liberties.

Mostly Fact: Doss’ vow to practice nonviolence was inspired by an illustrated Ten Commandments hanging in his childhood home and a violent fight between his parents.

Doss grew up in Lynchburg, Va., the middle child of William Doss, a carpenter, and Bertha Doss. From a young age, he was captivated by a framed poster of the Ten Commandments, and in particular the illustration that accompanied the Sixth Commandment: a drawing of Cain killing his brother Abel. Though his father, a World War I veteran, was often drunk and depressed, his mother was a woman of strong faith who regularly took her children to church. A scene in the movie in which Desmond takes a gun from his father during a fight between his parents is a variation on a similar event in Doss’ life. In reality, it was a fight between Doss’ father and uncle that prompted the boy to vow never to touch a gun again.

Fact: Doss could have deferred his military service but felt a moral obligation to join up.

When the Japanese bombed Pearl Harbor, Doss was working at a shipyard in Newport News, a position which made him eligible for deferment. Though taking it might have been an easier means of staying true to his convictions, Doss felt a moral obligation to serve, especially because the fight was not just for freedom but for religious liberty. He figured that as a medic, he could, as he put it, “be like Christ: saving life instead of taking life.” He also believed serving as a medic would prevent him from having to break the Fourth Commandment (to honor the Sabbath, observed by Seventh-Day Adventists on Saturdays) because, as he argued, “Christ healed on the Sabbath.”

Partly Fiction: Doss met his future wife, a nurse named Dorothy Schutte, while donating blood for an accident victim at a nearby hospital.

Doss did fall for a nurse named Dorothy Schutte, and he did walk several miles from his home to the hospital to donate blood after hearing a call for volunteers on the radio, but the events are fictitiously merged in the film. Doss and his future wife actually met at church in Lynchburg, and the two were married in August of 1942. They would remain married until her death in 1991, raising one son, Desmond, Jr.. Doss would later marry Frances Duman, with whom he remained until his death.

Fact: While in training, Doss became a target of both his comrades and military superiors, who saw him as a liability.

Doss viewed himself not as a conscientious objector, but a conscientious cooperator. Unlike objectors, he was eager to wear the uniform, salute the American flag and serve his country. But when he arrived for basic training at Fort Jackson, S.C., he quickly became alienated from his fellow soldiers, and his small stature and soft-spoken demeanor didn’t do him any favors. As in the film, he took both physical abuse and attempts, made by his superiors, to have him discharged from the military on the grounds of mental instability. Fellow soldiers resented him for getting out of duties for the Sabbath and felt they couldn’t trust him to protect them on the battlefield.

Fact: Doss went on to save between 50 and 100 of his comrades during the Battle of Okinawa.

Doss went overseas with the 307th Infantry, 77th Infantry Division, in the summer of 1944. He served as a medic on Guam and in the Philippines, which the movie doesn’t depict, prior to the Battle of Okinawa. During that battle, as in the film, he ran through enemy fire to bring his wounded comrades to safety. Doing so without cover was a particular risk for Doss, as Japanese soldiers targeted medics above other soldiers. Doss used a special double bowline knot which he had accidentally discovered during training in order to lower the soldiers from atop the ridge on which they were fighting. He served for two more weeks before being wounded by shrapnel from a grenade. He continued to treat other soldiers, despite his injuries, until his arm was broken by Japanese fire.

Fact: Doss became the first conscientious objector to receive the Medal of Honor.

On Oct. 12, 1945, President Harry S. Truman presented Doss with the Medal of Honor. Doss later recalled that Truman shook his hand like an old friend. He stated that he owed his life to God, who he believed saved him on numerous occasions so that he might perform the duties he did during battle. He would spend more than five years after the war being treated for his wounds, losing a lung to tuberculosis. Because of his injuries, he was never able to work full-time, and he devoted the rest of his life to working with his church. 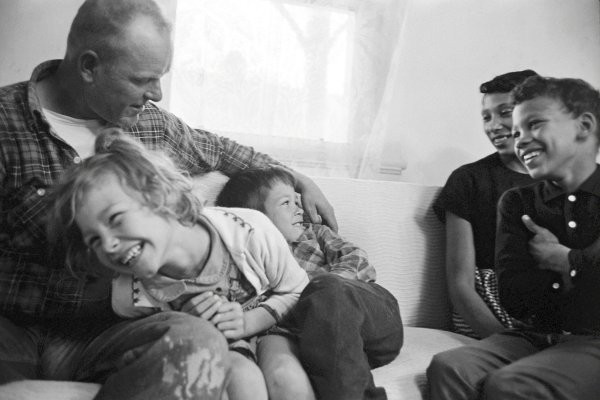 LIFE Magazine and 'Loving': The Photos That Captured a History-Making Couple
Next Up: Editor's Pick