President Barack Obama blamed partisanship for the lingering discontent around his signature health care law, the Affordable Care Act, during his latest pitch on the benefits of the law to millennials at Miami Dade College in Florida. But Obama also admitted that there are problems with the law that need to be addressed, including costly premiums and persistent gaps in coverage.

“Part of the problem is a Democratic President named Barack Obama passed the law,” the president said to cheers. “But just because a lot of the Republican criticism has proven to be false doesn’t mean that there aren’t legitimate concerns.”

Obama compared the Affordable Care Act as it exists today to a “starter home,” saying it was a good first step to reducing the U.S. uninsured rate. Under the law, the Department of Health and Human Services says 20 million people have gained insurance. But millions of people still do not have insurance, and among those who do, many face high out-of-pocket costs when they seek care.

During his speech at the Miami college on Thursday, the President listed a number of steps he believes need to be taken. He called on every state to expand Medicaid and said more tax credits could encourage families and young people to buy insurance in the marketplace. The President also said the federal government should provide a “public plan fallback” that he says would create more competition in the marketplace. “I don’t want to see anybody left out without health insurance,” Obama said. “The question we should be asking is, what do we do about these growing pains?”

The President’s remarks come at a pivotal moment for his health care law. The fourth open enrollment season is set to begin in the coming weeks, and proponents are again hoping that young, healthy citizens will purchase insurance in order support the sicker Americans who have access to coverage. Both supporters and critics of the law have complained about high insurance premiums, co-pays and deductibles, and limited doctor choice. Minnesota’s Democratic Gov. Mark Dayton, whose state expanded Medicaid, said recently that “Obamacare is no longer affordable for increasing numbers of people.” Also recently, insurance company Aetna announced it would join UnitedHealth Group and Humana in pulling out of the insurance marketplace in some states. Like Obama, some Democrats are now pushing for a public insurance option sponsored by the government in an effort to create more competition in the health insurance marketplace where few plans are available.

The future of the health care law will largely be decided by the upcoming presidential election, and the candidates have offered different solutions. Democratic presidential nominee Hillary Clinton has said she wants to “defend and fix” the existing law and institute the so-called public option that Obama and other Democrats support. Republican presidential nominee Donald Trump, on the other hand, has said he wants to repeal and replace the law. On Thursday, President said the focus should be on making the Affordable Care Act better, not nixing it.

“Repealing it would make the majority of Americans worse off when it comes to health care,” he said. “It would be bad for everybody.”

The White House said Thursday the President made his pitch at Miami Dade College because the school has shown excitement at the start of open enrollment periods, hosting “enrollment days” where those seeking care can get assistance. The White House also published letters sent to the President from people whose lives have been positively impacted by care on a new online hub. 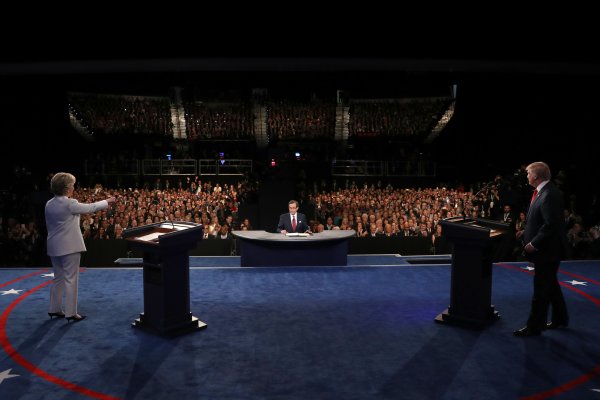 Watch Hillary Clinton and Donald Trump Together Again at the Alfred E. Smith Dinner
Next Up: Editor's Pick