A Warm Winter Is on the Way for Much of the U.S., Forecasters Say

Residents all across the southern U.S. should expect winter to be warmer and drier than usual, federal forecasters said Thursday.

Forecasters from the National Oceanic and Atmospheric Administration (NOAA) attribute the weather projections to the potential start of the La Niña climate pattern. La Niña, a climate phenomenon characterized by below-average temperatures cross the equatorial Pacific, shifts global weather patterns, making some areas cold and wet and others warm and dry. The warm and dry weather will extend from Atlanta to Los Angeles, while in the northern part of the Midwest, winter will likely be somewhat colder and wetter thanks to La Niña. The Northeast mid-Atlantic will likely experience an average winter, forecasters said.

The forecast is bad news for California and other Southwestern states currently experiencing a years-long extreme drought. NOAA warned that drought could spread to some parts of the southern plains during the winter.

The mild winter comes after a year of record monthly temperatures. Eleven out of 12 of the last months have been the warmest such month on record, and climate experts say 2016 will almost certainly be the warmest year on record. That record is the result of both long-term climate change and a particularly strong occurrence of the El Niño climate phenomenon, which raises temperatures across the equatorial Pacific and other locations across the globe.

Federal officials warned that Americans should prepare for extreme winter weather events despite the projections for a relatively mild winter. “This climate outlook provides the most likely outcome for the upcoming winter season,” says Mike Halpert of NOAA’s Climate Prediction Center. But “regardless of the outlook, there is always some chance for extreme winter weather.” 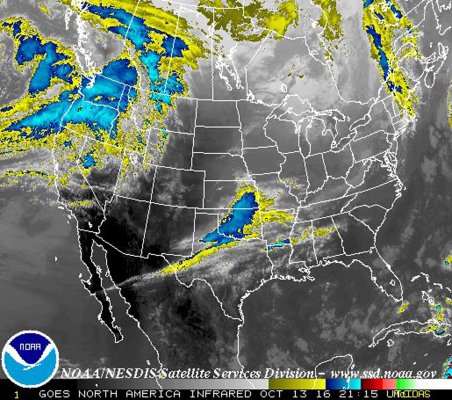