Donald Trump said Thursday he would accept the outcome of the presidential election — if he wins. And he said he might contest the results if they don’t go his way, doubling down on his incendiary statement during Wednesday night’s debate that raised the prospect of breaking with bedrock traditions of American democracy.

“I will totally accept the results of this great and historic presidential election — if I win,” Trump said at a rally in Delaware, Ohio, reiterating his statement at Wednesday night’s debate that he will keep the nation “in suspense” about whether he would gracefully concede the election in the event of the loss polls indicate is coming his way. Trump’s Democratic rival Hillary Clinton called his remarks Wednesday “horrifying,” and Trump came in for widespread condemnation across the political spectrum.

“That was sort of an unprecedented question. If Al Gore or George Bush had agreed three weeks before the election and waived their right to a challenge or a recount, there would be no Supreme Court case,” Trump argued Thursday. “In effect, I’m being asked to waive centuries of legal precedent designed to protect the voters.”

In reality, debate moderator Chris Wallace mentioned nothing about legal rights, asking instead about America’s tradition of “peaceful transition of power” and “that the loser concedes to the winner and that the country comes together in part for the good of the country. Are you saying you’re not prepared now to commit to that principle?”

Trump has repeatedly decried the election as “rigged.” There is no evidence to support his assertion.

TIME’s David Von Drehle also explains why the comparison to Al Gore doesn’t hold up. “This infinitesimal gap [in Florida] triggered an automatic recount. In other words, there was no ‘result on election day,'” he writes. “Florida law — not Al Gore — sent the game into overtime. And those same Florida election laws allowed for candidates in such a close contest to challenge the tally, which Gore understandably did … But at each crucial decision point, both camps appealed to the procedures set out in the U.S. Constitution and in relevant Florida election law. They sought the high ground in public opinion, not the low conspiratorial swamps.”

Still, in Ohio the day after the debate, Trump dangled the possibility of asking for a recount himself. “Of course I would accept a clear election result, but I would also reserve my right to contest or file a legal in the case of a questionable result,” he said to cheers from the crowd. “And always I will follow and abide by all of the rules and traditions of all of the many candidates who have come before me.” 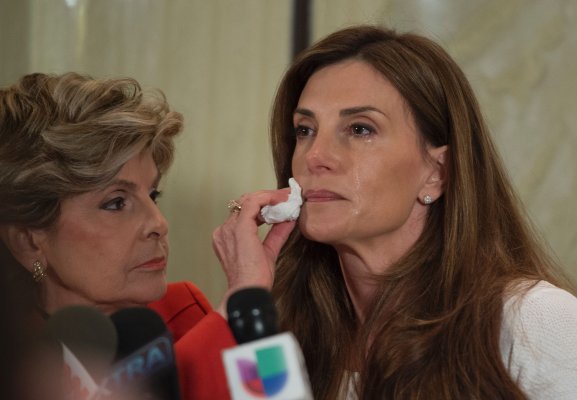 Another Woman Says Donald Trump Groped Her
Next Up: Editor's Pick