Switch Is the Dream Console Nintendo's Been Working Toward for Years

Glance at Nintendo Switch, the company’s edgy new gaming console due next March, and the ultimate takeaway is that you don’t need to look twice to grok what Nintendo’s up to.

Switch, until this morning codenamed NX, is a game system that wants to go anywhere you do, transforming itself to accommodate your surroundings from, say, the living room where your big-screen TV lives to a more space-challenged airplane seat or park bench. Its name, both a noun and a verb, sounds like a flourish, but it invokes its raison d’être with a dead-simple signifier. It’s the sort of category-defiant yet counterintuitively intuitive tech that makes lightbulb-popping sense to gamers and gamer-curious types alike. And Switch looks like culmination of ideas Nintendo has been toying with for years.

That couldn’t be more important now, on the heels of the Wii U—an “also-a-console-plus-a-tablet” experiment that seemed like an interesting idea in 2012. The Wii U failed to capture the public’s imagination (and dollars) the way the Wii did a decade ago. But, and this is a huge verging-on-contrarian but, it now seems the Wii U may have been a necessary failure. Knowing more about what Switch aims to be, the Wii U resembles a book of lessons, of roughed out concepts and technical toe-in-the-water ideas.

Switch is essentially the Wii U flipped. The Wii U’s brains are part of the set-top itself, a static processing nexus beholden to a clunky power brick that plugs into a wall outlet, making dragging it around unwieldy. You can play games wirelessly on the “dumb” tablet away from the TV, but at distances of only a few paces. With Switch, the brain is the tablet, making the mobile screen the axis of what Nintendo’s preview trailer suggests could be a cosmology of idiosyncratic experiences.

Start with your TV. The Switch tablet nestles in a dock with a clever black and white, yin-and-yang style logo that connects to the TV. Does the dock add mystery ingredients to the experience? Is there anything extra under that matte-black hood? A co-processor that helps boost the output to higher-definition latitudes? Maybe. Maybe not. But check out the size and shape of the dock in the preview video: It’s awfully thick to be just a signal throughput cradle and charging station. [Update: It seems it’s just a dock and charger after all! IGN reports a Nintendo rep says “The main function of the Nintendo Switch Dock is to provide an output to the TV, as well as charging and providing power to the system.”]

Move to the de facto gamepad, which is now basically a Transformer. The side pieces—where the thumb-sticks and buttons sit—each slide up and off from blade-like braces. Is that flat piece with the logo in the middle doing anything? Touchable? Just the battery housing? Something more? The side controls either attach to the sides of the Switch screen, or let you control it wirelessly, one held in each hand like a Wii Remote and Nunchuk. And then you’re off to the races with a tablet that looks like a bigger, sexier version of the Wii U gamepad.

And this is where Switch goes from intriguing concept to brain-recalibrating. Everyone knows what PlayStations and Xboxes and TVs do. Everyone knows what it’s like to play mobile games like Candy Crush or Angry Birds on tiny, imprecise, eye-straining screens. Switch is something more: an attempt to bring the control precision and power of traditional console controls to a panoply of mobile scenarios. Don’t let Nintendo calling this a “home system” on its website confuse you, by the way. That’s probably just preemptive marketing to assuage any concerns—by those worried the company might abandon the home theater space—that this was going to effectively be a souped up Nintendo 3DS.

And why the cartridges, of which there is one brief glimpse in the reveal? Probably for several reasons. To get around the constraints of the sort of storage you’d be able to fit in a high-powered mobile devices, for starters, and as well, I assume, to keep costs down. Not that the tablet couldn’t house internal storage, or let you plug your own storage cards into a slot to house your digital downloads. But anyone frustrated by Blu-ray games that foist dozens of gigabytes of data onto quickly overrun console hard drives should be able to appreciate the limbering benefits of direct-off-the-cartridge play.

How powerful is the tablet itself? It’s tough to judge from the clips of games in the teaser or speculate too deeply about how it’ll stack up against current (PlayStation 4, Xbox One) or next-gen, 4K-angled platforms (PlayStation 4 Pro, Xbox “Scorpio”). But it looks reasonably meaty, assuming it’s targeting the current 1080p standard. I may be wrong, but that certainly looked like Bethesda’s Skyrim, a gargantuan fantasy roleplaying game that’s five years old, but about to get a fully remastered version in a few weeks that I assume is going to be no slouch at devouring processing cycles. That, and Bethesda’s name appears in the copyright disclosure at the video’s end.

Nvidia’s put up a page about the system that acknowledges Switch uses a “custom Tegra processor,” so that tells us a trifle more. Nvidia makes a family of Tegra processors, including the Tegra X1, which would be the most likely candidate here. But slap “custom” in front of a product without divulging further details and all bets are off. It also matters what sort of interface developers have to the hardware. If it’s low level, like Apple’s Metal gaming tool, that, combined with any custom Nvidia wizardry, all but guarantees Switch’s performance peaks won’t be precisely gaugeable by extrapolating from other systems using Nvidia’s Tegra technology.

So what is Switch, really? It seems pretty clear, even off a diet-details marketing video. This is Nintendo doubling down on its core philosophy: that playgrounds work best when they’re part of our everyday routines, and, crucially, when we’re engaged in them face-to-face with other players. And that software innovation happens in tandem with hardware innovation.

Switch definitely feels like everything Nintendo’s learned about gaming to date rolled into a single, streamlined platform. The Wii U’s hybrid tablet-console approach as well as multiuser tablet gameplay. The Wii’s splitting of the gamepad into individually gripped wand-like controls, or the way the Wii Remote could be reoriented sideways and used like a traditional gamepad—one of the scenarios in the video showed a couple of guys in a car, each holding one of the control grips sideways, playing a Mario Kart game off the tablet, attached by some sort of extension arm to the passenger chair. (Will motion control factor with these once more? We’ll see.) The 3DS’s on-the-go mobile play scenarios, wherein groups of gamers converge in the same physical spaces to play cooperatively or competitively.

Speaking of, what does this spell for the 3DS and 2DS handhelds? Notice the conspicuous absence of children in this video. The actors here all look like twentysomethings, driving, flying solo, playing pro basketball video games (and real basketball beneath underpasses late at night), or training for eSports-style bouts of Splatoon, Nintendo’s quirky Wii U paintball shooter.

Don’t read too much into that. Nintendo abandoning younger players would be like Disney getting out of theme parks—not going to happen. The DS series appeals most to younger players, and so it’s likely a question of demographic profiles and platform support. Will Nintendo and third parties commit resources to make games for the DS or a DS followup aimed at younger players? It’s not inconceivable. Though it’s also not nuts to wonder if there isn’t another version of Switch’s debut video lying in wait, somewhere in Nintendo’s vaults, one that illustrates all the ways the new system could comport with younger hands and gameplay tastes.

What seems certain already, is that Switch doesn’t look like a misstep or a dud. It’s the first system from Nintendo in over a decade that almost instantly resonates. You can show this video to anyone and it wordlessly speaks for itself. Though it’s worth bearing in mind that at least part of the reason it does so, is that Nintendo’s built the case for this device on the back of every system—the Wii U included and in some ways most of all—that’s come before it. 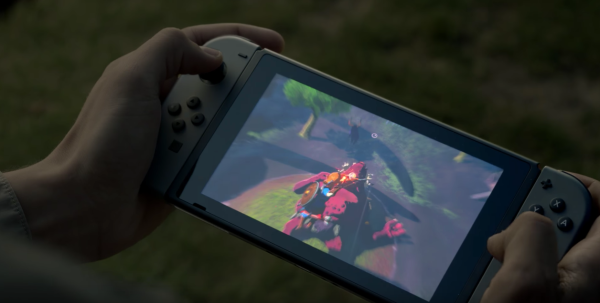 Everything to Know About Nintendo's New Switch Console
Next Up: Editor's Pick