Some thoughts about the third Presidential debate:

1. Donald Trump is unfit for the presidency because he doesn’t believe in the will of the American people. Every news outlet said that his refusal to accept the results of the election was the headline tonight—and a very dangerous moment in American history—and I think there needs to be unanimity on this. The man is a demagogue playing to the worst paranoid fears of a minority of the electorate blinded by anger. Both Trump’s daughter Ivanka and his running mate, Mike Pence, publicly disagree with him. Leave aside all the other trash and nonsense and lies that he has promulgated during the campaign, this statement alone disqualifies him. Given the lives lost and the sacrifices made to build this democracy over 240 years, the man is an utter disgrace.

2. Hillary Clinton had a pretty good night and her best moment was her response to Trump’s refusal to accept the election results. She repeated a litany of things Trump had said were “rigged,” including the Emmy that his TV show didn’t win. She was smart, sharp and funny—but a bit too harsh for my taste and a bit too contentious, engaging too often in cross-talk gutter-fighting. That’s Trump’s game, Clinton, not yours. But her performance overall had the effect of solidifying her base as well as her non-base of Bernie supporters—note the shout-out to the LGBT community—proving, as always, well-versed on policy and, for the most part, unflappable (with the exception mentioned above).

3. Trump had his best performance, too, but it wasn’t very good. No specifics (he has none). A plethora of baloney and lies (up to his eyeballs in bull-pucky). But he did reassure his base on issues like Supreme Court and immigration and taxes. (It remains amazing to me that Republicans are still peddling the idea that lower taxes will close deficits while ignoring the overactive regulatory state that is, indeed, smothering small businesses).

4. Trump’s ignorance, and his willingness to tell lies off it, is bottomless. He was totally wrong about Mosul—the leadership of ISIS was never there (they’re in Raqqa, in Syria). Iran won’t take over, although there will be a battle for control between the Arab Sunnis and the Kurds. Iran isn’t taking over Iraq, period—the last time it tried to do so, in the 1980s, it took more than a million casualties. Persians and Arabs hate each other, always have. It would have been nice if Clinton had parried, “We’re not going into Mosul to find the leaders of ISIS. We’re going in to liberate 2 million people who hate living under the tyranny of ISIS.” But we pundits are so much smarter than the candidates after the battle is over. …Although I must say that Mosul is yet another example of a basic truth, as the liberation of Anbar province was ten years ago: Muslims hate living under these reactionary religious fanatics. That is great news for the world.

5. If it weren’t for Trump’s denunciation of American democracy, the headline of the debate would be his weird inability to credit the 17 US intelligence agencies that believe the Russians are behind the hacking of Democratic Party emails. His reticence truly is a mystery, a dangerous one. Is Trump colluding with Putin? The more his strange behavior continues, the more thinkable the unthinkable becomes. It should also be pointed out that Trump had more good things to say about Putin and Assad—they’re tough, they’re playing us for suckers—than he did about any American politician, dead or alive, including Ronald Reagan.

6. I’m still not inspired by Clinton. She’s selling the same old Democratic stuff, old wine in old bottles. Some of it works, some of it has been proven defective. None of it matters, given the enormity of Trump’s outrages. But it would be nice to say: Wow! That’s an interesting new idea.

7. Chris Wallace won the debate, as Fox anchors have staged the best, most substantive debates all year. One quibble: Obama’s stimulus package did not “cause” the slow growth that followed. The stimulus was an immediate blood transfusion that prevented the collapse of the economy and another Great Depression. It was a brilliant success.

So that’s it for debates this year. I can’t say I’m sorry they’re over. Trump has been poison to our system. No good has or can come from his candidacy. Happily, we don’t have to see him again until election night when he concedes, or refuses to do so. What an embarrassment he is. How sad for our country. 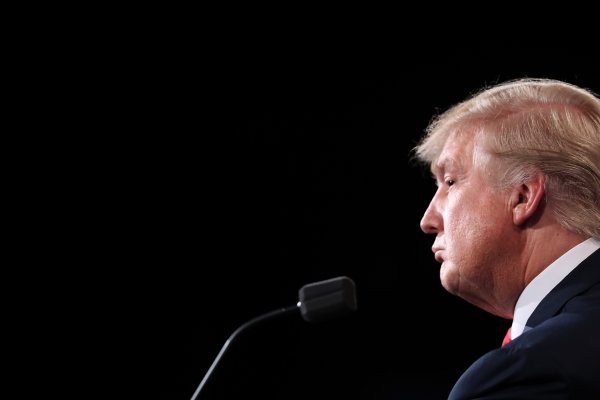 How Donald Trump Undermined American Democracy
Next Up: Editor's Pick