Hillary Clinton Wants to End on a High Note. But the Debate Showed Why That's Hard.

Hillary Clinton’s aides wanted their candidate to make an affirmative pitch about her own merits at Wednesday night’s debate and let Republican nominee Donald Trump sink into a morass of controversial remarks.

But her performance will be better remembered for her quick-witted attacks and impassioned retorts.

During a policy-heavy debate that landed on abortion and Russian foreign policy, the Democratic nominee repeatedly jabbed at Trump with caustic attack lines, many apparently unplanned, until she goaded and slowly wore her frustrated opponent down.

When Trump bragged about one of his hotels in Las Vegas, Clinton attacked him for his habit of importing foreign materials for his businesses. “I sat in my apartment today on a very beautiful hotel down the street known as Trump—” he began.

“Made with Chinese steel,” Clinton cut in.

When Trump said Russian president Vladimir Putin “has no respect for” Clinton, she retorted with the flash of a knife.

“That’s because he’d rather have a puppet as president,” she said. “You’re a puppet,” Trump replied weakly.

When asked about entitlement reform, Clinton said she would raise taxes on high-income earners like Trump, who has admitted to not paying income taxes.

“As long he can’t figure out how to get out of it,” she said slyly.

By then, Trump was fed up. “Such a nasty woman,” he said.

For Clinton, it was not exactly the night her aides may have hoped for. With 20 days until Election Day, a majority of voters continue to distrust Clinton and view her unfavorably. Polls suggest many Americans support Clinton simply as an alternative to Trump, whom many Republicans and moderates view as unacceptable.

If Clinton on Wednesday night sought to project empathy and connect with viewers at home, it is unlikely to be the impression most come away with. Trump stole the night’s headlines by saying he may not accept the results of the election in November.

But Clinton’s heated remarks on Wednesday night about abortion and the integrity of American elections reflected the kind of authenticity that her supporters have been hoping to hear about.

She waited patiently on Trump’s left on the debate stage in Las Vegas, listening and watching before she pounced with cutting remarks or delivered impassioned statements that lined up with the sense of outrage many Americans have felt watching the election. Canned lines or not, Clinton struck them with gravitas.

When Trump astonished the audience by saying he may not accept the results of the Nov. 8 election if he loses, Clinton called his comments “horrifying” and “undermining democracy.”

“We’ve been around for 240 years. We’ve had free and fair elections. We’ve accepted the outcomes when we may not have liked them,” Clinton said. “And I for one am appalled that somebody who is the nominee of one of our two major parties would take that kind of position.”

In remarks that Trump rarely makes on the campaign trail, he spoke in graphic detail about abortions, saying that Clinton favors a policy that allows doctors to “take the baby and rip the baby out of the womb in the ninth month, only the final day. And that’s not acceptable,” he said.

Clinton responded to Trump with pathos. “Using that kind of scare rhetoric is just terribly unfortunate. You should meet with some of the women that I’ve met with. Women I’ve known over the course of my life,” Clinton said emotionally. “This is one of the worst possible choices that any woman and her family has to make. I do not believe the government should be making it.”

Mindful of her image, Clinton has sought in rapidly morphing iterations to soften her image and make a positive case for her candidacy. In the last 18 months, she has discussed her grandchildren, her work with children over the years, speaking about her mother and her father’s business. While Trump’s message reduces to the unmistakable and punchy “Make America Great Again,” Clinton has adopted and shed new slogans and speech themes repeatedly throughout her campaign.

And in recent weeks, Clinton has redoubled her efforts. Her aides have wanted her to lay out the core themes of her campaign and connect with voters as Trump sinks under the weight of allegations about assaulting women.

With Trump standing next to her on the debate stage and being accused of sexual assault by a new woman almost daily, her aides believe Clinton may have her best chance yet to make a favorable impression on jaded voters.

“We’re trying to position ourselves and our campaign to earn the support of those who ordinarily might be fore the Republican candidate,” said a Clinton senior official. “We don’t feel the need to convince people why they might be outraged but we do think we need to position ourselves as an acceptable alternative for Republican- minded voters that are can’t see themselves supporting Trump.”

Clinton has taken the message to heart. “When they go low, we go high,” Clinton has been saying at rallies, borrowing a line from first lady Michelle Obama.

Her campaign has published a series of testimonials in recent weeks based on interviews with people Clinton has known throughout her life. One features a young woman, named Aleatha, whose middle school and high school graduation Clinton attended, and another features a friend Clinton had since grade school. New Clinton advertisements have featured children, and one has showed a disabled girl Clinton befriended who spoke at the Democratic National Convention in Philadelphia.

But if Clinton tried to show her softer edges on Wednesday night, that was not what broke through amid her fusillade of attacks against Trump.

When Trump attacked Clinton over the terrorism, the Democratic nominee delivered a lengthy response about handling American policy in Iraq and boasted about her own role in the killing of Osama bin Laden. And she could not miss a zinger at Trump.

“We do need to go after Baghdadi, just like we went after Bin Laden while you were doing Celebrity Apprentice,” Clinton said.

Trump, Clinton suggested time and again, was a buffoon in politician’s clothing.

“You know, every time Donald thinks things are not going in his direction, he claims whatever it is, is rigged against him,” Clinton said. The Iowa caucus, the FBI, the Republican primary and the court system, all rigged, she said.

“There was even a time when he didn’t get an Emmy for his TV program three years in a row and he started tweeting that the Emmys were rigged against him,” Clinton said, baiting her opponent.

And to this, Trump could not resist a response.

“Should have gotten it,” he said. 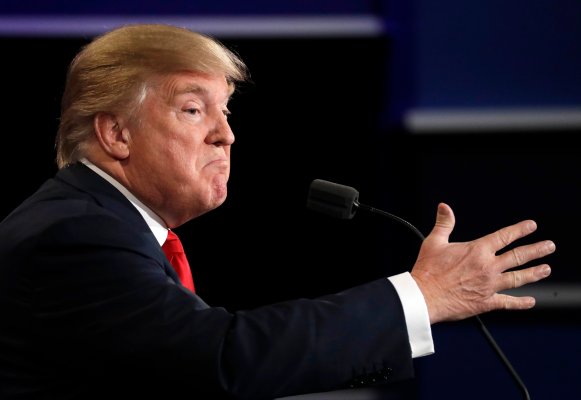 Maybe Donald Trump Should Win an Emmy for the Debate
Next Up: Editor's Pick