Super Typhoon Haima barrelled into the Philippine’s northeastern coast on Wednesday night with a ferocity that rekindled memories of Super Typhoon Haiyan, which killed at least 6,300 people in 2013.

Haima – known locally as Typhoon Lawin – made landfall at just before midnight on Wednesday at Peñablanca in Cagayan province, where it ripped tin roofs from houses and cut power in many villages, the Philippine Daily Inquirer reports. Metal crumpled “like paper,” the Inquirer said.

At 1:00 a.m. on Thursday local time the eye of the storm was in the vicinity of Solana, Cagayana and had maximum sustained winds of up to 225 km/h near the centre and gustiness of up to 315 km/h, according to the Philippine Atmospheric, Geophysical and Astronomical Services Administration (Pagasa).

This puts the force of Haima almost on par with Haiyan, which, reached a maximum estimated wind speed of 315 km/h. Evacuation programs were already underway in northern provinces, which are especially vulnerable to landslides.

Gerg Cahiles, a correspondent for CNN Philippines was holed up in a hotel in Tuguegarao City, Cagayan, when Haima made landfall late on Wednesday night. He told TIME he had never encountered “rain and howling wind this intense.” In the aftermath of the storm early Thursday, he emerged to a scene of utter chaos. The roofs of the city hall and the provincial hall had been blown away. Homes, schools and hospitals had been damaged. “The city was an image of devastation, there were so many collapsed structures; so much shattered glass,” Cahiles said.

Ryan Singson, a Governor of Ilocos Sur, told TIME that howling winds had uprooted trees and downed electricity poles in the province, which was still without power in most areas at 7pm, local time.

No casualties had been recorded but it was still too early to assess the extent of damage to infrastructure and agriculture, he said. Singson credited improved early warning systems – as well as the dampening effect of the Sierra Madre Mountain Range – for mitigating the impact of the typhoon. “Yolanda was really an eye opener for us,” he said, using the local name for Typhoon Haiyan.

When Pagasa’s 2pm bulletin on Wednesday raised Tropical Cyclone Warning Signal #4 – the second highest severity level for typhoons in the Philippines – a memo to evacuate at-risk areas was sent out to local mayors. Emergency food packs and road clearing equipment were distributed, and a few hours later forced evacuations began.

President Rodrigo Duterte, on a state visit to China, is scheduled to fly home on Friday.

“We only pray that we be spared destruction such as in the previous past which brought agony and suffering to our people, but we are ready,” Duterte said at a news conference in Beijing. He told people to heed disaster agency orders, including abandoning coastal communities prone to storm surges.

In its 8:00 a.m. bulletin on Thursday morning, Pagasa said Haima had “slightly weakened.” It had been downgraded from a super typhoon to a typhoon and was raging across the mountainous province of Apayao, headed out towards the South China Sea.

The Associated Press reports that at least five people had been killed in northern Luzon, but the eventual death toll is likely to rise.

Over 90,000 people have been forced to flee to safer ground and, according to the Phillipine Coast Guard, 2,638 passengers, 245 rolling cargo ships, 33 vessels, and 39 motorboats were stranded as of 8 a.m. Thursday morning in Southern Tagalog, Western Visayas, Bicol, and northeastern Luzon. 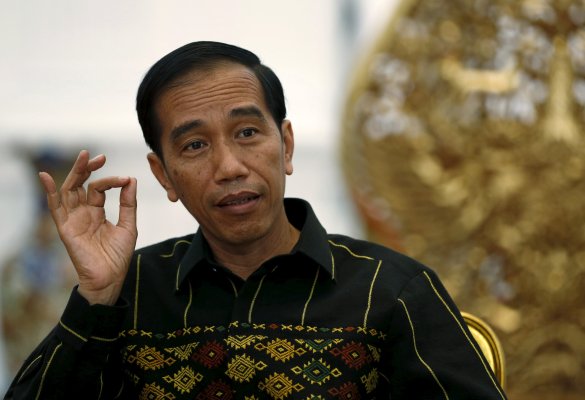