Republican presidential nominee Donald Trump refused to say whether or not he will accept the outcome of the election at the final debate.

“I will look at it at the time. I’m not looking at anything now,” Trump told moderator Chris Wallace. “I’ll keep you in suspense.”

Trump’s own team has also tried to walk back the “rigged election” line. His running mate, Indiana Gov. Mike Pence, said the campaign will “absolutely accept the result of the election” during an interview with NBC’s Meet the Press on Sunday. Earlier on Wednesday Trump’s daughter Ivanka told TIME’s Nancy Gibbs that her father would “do the right thing” once the results of the election are posted.

Clinton passionately rebuked Trump’s statements, piggybacking off of President Obama’s comment that the Republican nominee is “whining” about the election before the votes have been counted.

“Every time Donald thinks things are not going in his direction his claims its rigged against him,” she said, pointing to tweets the nominee sent out after his former reality television show The Apprentice failed to win an Emmy.

“Let’s be clear about what he is saying,” she said. “He is talking down our democracy.” 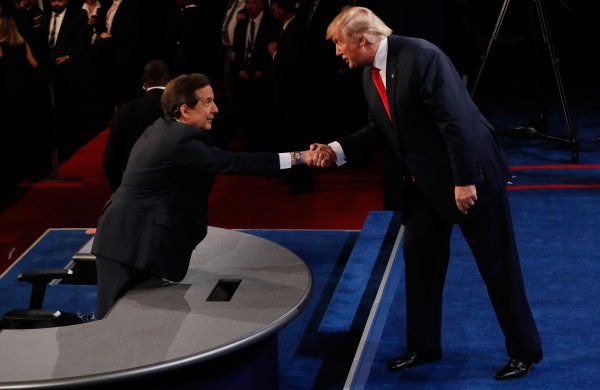 The Real Winner
Next Up: Editor's Pick