Donald Trump once again denied all allegations of sexual assault against him, arguing the women were either seeking “their 10 minutes of fame” or were prodded to make the claims by Hillary Clinton’s campaign.

During the final presidential debate Wednesday night, Trump said of the women accusing him of sexual assault, “I don’t know these people. I have a feeling how they came. I believe it was [Clinton’s] campaign that did it … I believe, Chris, that she got these people to step forward. If it wasn’t, they get their 10 minutes of fame.”

Trump, in fact, does know at least two of the women: Natasha Stoynoff was a PEOPLE magazine reporter assigned to cover him, who was interviewing him for a profile at the time of the alleged assault, and Summer Zervos was a contestant on his reality show The Apprentice.

Trump also argued, incorrectly, that the assault claims have been “largely debunked,” and said that he hasn’t told his wife Melania that he’s sorry. “I didn’t even apologize to my wife, who is sitting right here, because I didn’t do anything,” he said.

Clinton responded by noting that Trump has also implied at recent rallies that the accusers were unattractive.

“Donald thinks belittling women makes him bigger,” she said. “He goes after their dignity, their self worth, and I don’t think there is a woman anywhere who doesn’t know what that feels like.”

Trump has been embroiled in heated controversy over his treatment of women since a 2005 Access Hollywood tape leaked in early October in which he says of women, “Grab them by the p—y. You can do anything.” Since then, multiple women have come forward and claimed that Trump has kissed or groped them without consent. 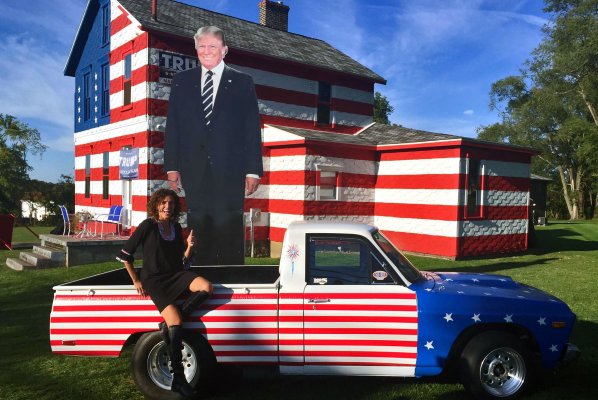 See the Donald Trump Fans Who Went All Out
Next Up: Editor's Pick