Peshmerga soldiers stand around a tunnel dug by ISIS in a house in Bartella, Iraq, recently recaptured by the Kurds during the battle to retake Mosul on Oct. 18, 2016.
Carl Court—Getty Images
By Jared Malsin/Shaquli, Iraq

The mouth of the tunnel lies in a two-story, orange and brown villa, one of a flat row of houses in this village in northern Iraq. When Kurdish troops swept into the town on Monday, they dropped burning tires down the underground passageway and then sealed the entrance with a pile of debris, hoping to kill or smoke out any ISIS fighters who may have fled beneath the earth.

Two days later, the rooms of the house are still piled high with dirt. Dry earth spills out one of the cracked front windows. The Islamic State fighters who dug the tunnel hid the soil inside in order to avoid detection by drones or other airborne surveillance, which could have brought airstrikes down on their head. The tunnel sinks seven meters into the ground and stretches across the street and over to nearby houses, and perhaps even further. “We didn’t check them. We just burned the tires and closed the entrances,” says Sardash Najat Obeid, the 27-year-old sentry posted at the house.

The troops stationed here believe at least two ISIS members are still at large. Two nights earlier, troops stationed in the area had shot and killed a child attacker who approached wearing an explosive belt and clutching a pair of binoculars.

The tunnel is just one part of a huge underground network left behind by ISIS, after Kurdish Peshmerga fighters wrested control of this series of villages east of the city of ISIS-held city of Mosul on Monday. The militants also left behind an obstacle course of homemade bombs, as they attempt to slow a long-awaited Iraqi-led offensive toward the ISIS-held city of Mosul. A coalition of Iraqi forces launched the operation on Monday, opening up a critical fight to reclaim the largest city still under the control of the ISIS caliphate. The Kurdish fighters’ push into the villages was part of the long opening phase of the battle, setting the stage for an eventual assault on Mosul itself, which had a prewar population of around 2 million,

The otherworldly scene of desolation in the village of Shaquli after more than two years of jihadist control is a sign of how this offensive may go. The Kurdish fighters known as Peshmerga are still picking their way through houses to locate and defuse booby traps left behind by ISIS, including one in the entrance to a large building in which several fuel barrels are wired together, attached to a trigger. Many of the houses have already been leveled by airstrikes carried out by the U.S.-led coalition. Bullet casings are scattered on the pavement.

Nearly every house bears trademark ISIS graffiti: crude renderings of the group’s black flag. Kurdish fighters sit and eat their lunch of chicken and rice along a wall emblazoned with “The Islamic State of Iraq and al-Sham,” what ISIS calls its caliphate. ISIS members also tagged the houses according to their brutal sectarian math The houses of Sunni Muslim families are identified as such with spray paint. (ISIS is a Sunni group that considers other Islamic sects heretical.) Non-Sunni houses are tarred with epithets.

Everywhere there are unnerving signs that the ISIS troops had planned to fight for the town, but departed sooner than expected. There are piles of tires clearly intended to be burnt, which would have sent heavy smoke into the sky, blocking the view of coalition warplanes bombing them from above. Some of the tires have been burnt, but many of the carefully stacked piles were intact, suggesting ISIS troops had withdrawn before they could fully set in motion their defense.

In a village across the road, a dead ISIS fighter lay in a field of debris. The militant had been no older than a teenager, his youthful face showing no signs of facial hair. Now he lays spread eagle, arms flung as if he had been knocked back suddenly. Blood cakes his ripped pants. Flies circle his face.

Read More: What to Know About the Operation to Retake Mosul

A few houses down from the villa containing the tunnel entrance, Peshmerga men load household items onto a pickup truck and a trailer: mattresses, a large metal water tank. Two civilian men drive up, identifying themselves as the owners of the house. “I’m poor and I live in a camp, why are you taking my stuff,” one man pleads. They haggle for a few minutes before the soldiers relent and start unloading the truck. They grumble that they had been planning to take the items to the front lines, to help with the war effort. “If it’s your stuff, take it,” says one of the soldiers.

The civilians are two brothers, Ahmed Abdel Ghaffur Fazal, 36, and Burhan Abdel Ghaffar Fazal, 38. They had fled the village in the summer of 2014 with their families. Their two adjacent houses had apparently been taken over by ISIS members. The jihadists ransacked each room in the house, leaving kitchen cupboards hanging open and household items strewn on the floor: framed pictures, mattresses, an overturned coffee table, assorted papers. One ISIS fighter apparently left behind a pair of ID cards in an open drawer, his photo showing a mustachioed man with a blank stare. The jihadists absconded with televisions and a refrigerator.

The brothers and their families fled the village with only a moments’ notice, taking only their clothes. Burhan, a fabric seller, walks through his brother’s house pointing out the missing appliances. “Thank god it’s okay,” he says. “At least it wasn’t hit by an airstrike.” 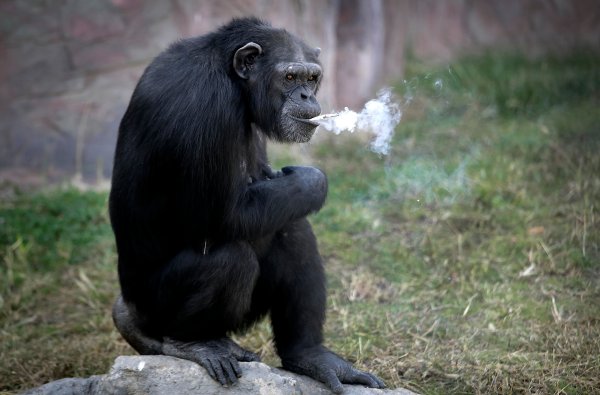 PETA Isn't Happy About That Smoking Chimp in North Korea
Next Up: Editor's Pick