How Republicans Will Survive Being Taken Hostage by Donald Trump

Michael Steel is a managing director at Hamilton Place Strategies and a fellow at the Georgetown Institute of Politics. He was a senior advisor to Governor Jeb Bush's presidential campaign, was the longtime press secretary for former Speaker John Boehner, and held a similar role for then-Vice Presidential candidate Paul Ryan in 2012.

Civil wars are always nasty – Yankees vs. Rebels, Rebels vs. the Empire, Captain America vs. Iron Man – but the current “civil war” within the Republican Party will largely end on election day, and the fallout will be far milder than people now expect.

There will be serious disagreements over the future of the party. There will likely be more “autopsies” from the RNC and outside groups. A gaggle of disaffected Republican House members will continue to bedevil Speaker Ryan. But we are not in danger of the party splitting or of the anger between warring factions preventing the party from competing again on the national level. George W. Bush will not be the last Republican president.

Look at the facts: Donald Trump is not a Republican. He has not consistently advocated or defended any of our principles, including protecting unborn human life, the Second Amendment, exceptional American leadership abroad, free speech or economic opportunity. He is essentially a third-party independent populist who exploited a five-car pileup in the “establishment” lane of the GOP to secure the nomination.

Voters understand that. It’s why–at this point–down-ballot Republican candidates are generally running ahead of Trump in the polls, especially in statewide races, even as Democrats push the limits of facts and logic trying to tie GOP candidates to him.

On the presidential level, every committed conservative today faces a terrible choice: do you support the depraved clown holding the Republican party hostage, or Hillary Clinton, who–leaving aside her liberal ideology–has a clear record of poor judgment and at least the appearance of self-dealing? Or do you “throw your vote away” by voting for a third-party or write-in candidate?

Whatever individual Republicans decide, we all recognize this is a situation with no good options, and–despite the rhetoric in the heat of the moment–there is some level of respect and understanding for our friends who have made different choices. Obviously, some public Trump supporters have be-clowned themselves in a manner that will permanently stain their reputation. That, I expect, will be neither forgiven nor forgotten. But, assuming Trump loses, I think most conservatives will quickly rally to oppose President Clinton’s agenda, and–just as importantly–to develop and advocate conservative solutions to the very real problems facing the American people.

Trump’s candidacy is also obscuring the fact that Republicans are still the party of the future. Hillary Clinton is a Betamax candidate in the Netflix era. And there is no one coming up behind her. Down-ballot Democrats have been decimated in the Obama era. Republicans have a deep and diverse bench of 40-something year-old statewide officeholders poised to provide the next generation of leadership for the party.

Some of the impediments that have previously hurt the GOP’s appeal are fading. In 2012, Republicans’ opposition to gay marriage was a non-starter for most millennials (and many other Americans who love and respect their gay friends and relatives). That issue has almost completely faded from the public debate. As many states experiment with various schemes for legalized marijuana, that issue, too, is less of a barrier to libertarian-minded young people voting for Republican candidates.

What about the issues that Trump has championed? The history of third parties in America is that–when they are successful–their good ideas are co-opted by one or both of the major political parties. Stripped of his hateful rhetoric, counter-productive policy proposals, and the deplorable racism and anti-Semitism of some of his supporters, his focus on the issues facing working class Americans can and should have an impact, both in terms of actual policy and how we talk about the benefits of policies in the future.

That is the struggle that GOP faces: how do we best help the Americans left behind in the current economy? What tax policies and spending priorities will help struggling rural and urban areas become beacons for investment, innovation and new jobs? In so many towns people look around and remember a time when the local factory was booming, and there wasn’t anyone speaking Spanish. How do you convince them that immigrants really didn’t steal their jobs? That more trade and an effective system for immigration will help more than hurt? More fundamentally, how do you convince them that their children will inherit a better future, just like every American generation before them? That will be how we can not only keep the support of angry Trump voters, but also expand our support among minorities and women.

That is our challenge. How will we do it?

We actually have a model in the Democratic Party. Following three straight presidential losses in the 1980s (the final one, by historical standards, a very winnable race), Democrats turned to the Democratic Leadership Council, which championed the ideas of moderate office-holders like Arkansas Governor Bill Clinton. The group supported, “a new public philosophy built on progressive ideals, mainstream values, and innovative, non-bureaucratic, market-based solutions.” Substitute “conservative” for “progressive” and that’s exactly what the GOP will need in the wake of Trump.

All this is difficult to keep in mind right now, as Republicans rip each other apart on social media and cable news, but after the election it will be clear again that what unites us is far greater than what divides us. We will dust ourselves off, pick up the pieces, and – more quickly than most people can imagine – we will win. 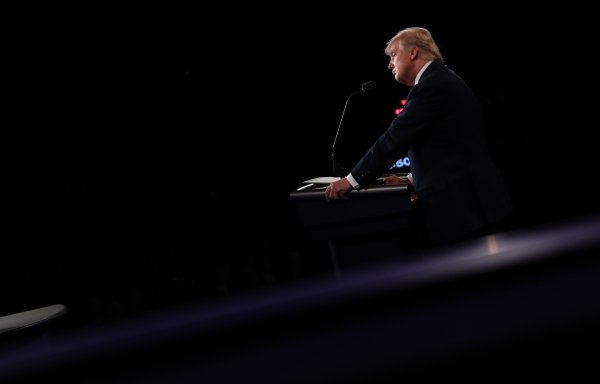 Why You Shouldn’t Laugh at Donald Trump’s Hands
Next Up: Editor's Pick