Wednesday’s episode of Chelsea Handler’s Netflix show, Chelsea, features a star-studded dinner party where Handler sits down with Ava DuVernay and Hilary Swank, among other notable women. In a clip provided by CNN, they dive into the massive pay gap in Hollywood, revealing personal experiences with inequality.

DuVernay begins by talking about Selma, which she says was a “big jump” for her because of how high the film’s budget was. “I was the seventh director they asked. All the men before me said no,” she said. She went to tell a fellow director about her news, and he admitted that he was also given a high-budget film—Jurassic World.

Hilary Swank was also candid about her salary struggles. “When I did Boys Don’t Cry, I was 24 years old, I made $3,000. In order to have health insurance, you have to make $5,000,” she told the table. “I had an Academy Award, no health insurance.”

Handler’s dinner party isn’t the first time famous women have come together to express their frustration with unequal pay and the gender pay gap, which affects women outside of Hollywood too. On Equal Pay Day in April, stars like Patricia Arquette, Connie Britton and Hope Solo spoke out about pay. Kristen Bell, Jennifer Lawrence and Evan Rachel Wood have also been candid about sexism on set and their smaller paychecks compared to male stars. 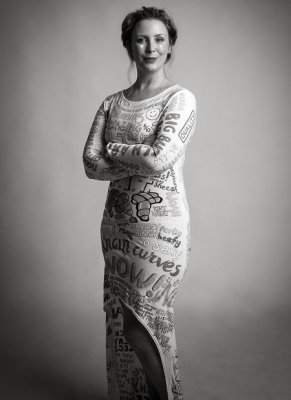 An Artist Turned All the Comments Made About Her Body Into a Dress
Next Up: Editor's Pick