Philippine President Rodrigo Duterte doesn’t normally do hats. That said, he has cap firmly in hand during his first official visit to China, where the 71-year-old is engaging in a none-too-subtle attempt to cadge economic concessions from the Asian superpower.

“The only hope of the Philippines economically, I’ll be frank with you, is China,” Duterte told the Chinese state broadcaster CCTV in an interview released Wednesday, while describing his visit as “the defining moment of my presidency” and claiming that “a fourth of our population are Chinese descendants.”

Duterte was elected by a landslide in May polls upon promises to purge the Philippines of crime and corruption within six months. Three months in and more than 3,600 suspected addicts and dealers have been killed, victims of an extrajudicial bloodbath meant to rid the country of drugs.

The wave of violence has chilled relations with historic ally Washington, with Duterte unleashing a torrent of expletives at U.S. President Barack Obama as well as senior figures in the U.N. and E.U. in response to criticism of his human-rights record. “This is the start of the souring of our relations with America,” Duterte told CCTV.

China, by contrast, has expressed support for Duterte’s war on drugs, seeing an opportunity to mend relations with the nation that had, under former President Benigno S. Aquino III, stood up to China’s expansive territorial claims in the South China Sea, where both nations squabble over ownership of rocks and reefs.

Duterte, however, clearly sees economic benefits in softening his nation’s stance on the disputed islets, flying to Beijing with a phalanx of 250 Philippine business figures. Though his erratic behavior has previously caused the Philippine market to slump, the bourse rallied slightly on Wednesday as news of the Beijing charm offense reached investors.

“I would say that China deserves the kind of respect that China now enjoys,” Duterte told Chinese state news wire Xinhua in an earlier interview.

Whether China will be so easily swayed remains to be seen. “He is insightful, down to earth, he could really serve his people,” posted one user of China’s Twitter-like microblog Weibo.

Others weren’t so convinced: “We can’t rely on him, because he will follow anyone who gives him money, he is good at making use of the relationship between China and America, he bargains everywhere.”

Duterte, for his part, is pulling out all the stops, telling CCTV, “Maybe because I’m Chinese, and I believe in sincerity.” (His grandfather reportedly hailed from China.)

He is certainly sincere about wanting Chinese cash, even beseeching Chinese President Xi Jinping — via CCTV — to help build a Philippine railroad, saying: “If you can find it in your heart to give it to us.” 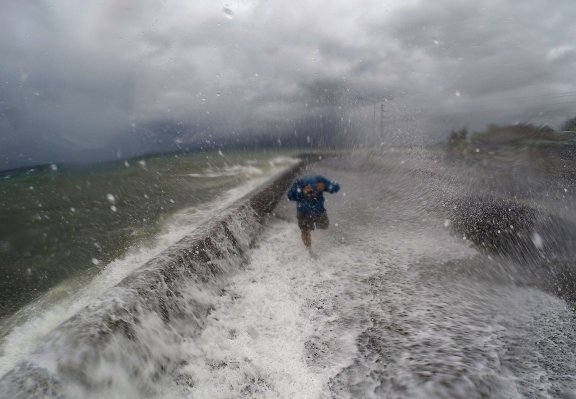 The Philippines Braces for Super Typhoon Haima
Next Up: Editor's Pick