Six colleagues and close friends who corroborate former PEOPLE writer Natasha Stoynoff’s account of being attacked by Donald Trump in 2005 are now coming forward. Among them is a friend who was with Stoynoff when she ran into Melania Trump later in N.Y.C.

The wife of the Republican nominee denies meeting Stoynoff after the attack, but Stoynoff’s friend Liza Herz remembers being there during the chance meeting.

“They chatted in a friendly way,” Herz, who met Stoynoff in college, says. “And what struck me most was that Melania was carrying a child and wearing heels.”

Stoynoff’s story, which made national news when it broke last week and is reprinted in this week’s issue of PEOPLE, describes a run-in with Trump when she was covering him and pregnant wife Melania on assignment for PEOPLE in December 2005.

“We walked into that room alone, and Trump shut the door behind us. I turned around, and within seconds he was pushing me against the wall and forcing his tongue down my throat,” she writes.

Trump vigorously denies the story and later attacked Stoynoff on the campaign trail, saying, “She lies! Look at her, I don’t think so.”

Stoynoff describes meeting Melania later year: “I actually bumped into Melania on Fifth Avenue, in front of Trump Tower as she walked into the building, carrying baby Barron. ‘Natasha, why don’t we see you anymore?’ she asked, giving me a hug.”

In a CNN interview with Anderson Cooper on Monday, Melania denied the encounter ever took place.

“The story that came out in PEOPLE magazine, the writer she said my husband took her to the room and started kissing her, she wrote in the same story about me that she saw me on Fifth Avenue, and I said to her ‘Natasha, how come we don’t see you anymore?’ I was never friends with her, I would not recognize her,” she told CNN.

PEOPLE Editor in Chief Jess Cagle says in a statement about Stoynoff’s piece, “In this week’s issue of PEOPLE (which hits newsstands in New York on Wednesday), we feature a story that includes named sources who can corroborate Natasha Stoynoff’s account – including one woman (a friend of Natasha’s) who was actually with her when she bumped into Melania Trump on Fifth Ave., as outlined in her story.”

Five other witnesses also back up Stoynoff’s account of her encounter with Trump:

Marina Grasic, who has known Stoynoff for more than 25 years, says she got a call from her friend the day after the attack. Stoynoff detailed everything about the attack, from Trump pushing her against a wall to the business mogul showing up at her massage appointment the following day, she says.

According to Grasic, her longtime friend was embarrassed and even thought of Trump’s then-pregnant wife when deciding not to come forward about the encounter.

“Natasha was also struggling about not hurting pregnant Melania if the story came out,” Grasic says. “Beyond just the attack, she was horrified by the vulgar circumstances under which she was attacked and propositioned to have an affair. She was there in a professional capacity, writing an article about their happy marriage, and after the incident Trump acted like nothing happened.

“She was particularly concerned that if he was capable of such behavior, what else was he capable of? Certainly character assassination by a powerful man was of great concern to her, which seems warranted in light of what Trump is saying about her this week. She ultimately decided to stay quiet but be taken off the Trump beat.”

Stoynoff’s former journalism professor, Paul McLaughlin, says that the writer called him in tears looking for advice the very night of the harrowing encounter. However, he cautioned her to remain quiet in fear of how Trump may retaliate.

“She wasn’t sure what she should do,” McLaughlin recalls. “I advised her not to say anything, because I believed Trump would deny it and try to destroy her.”

“It was tough decision but in a he said/she said we believed she would lose,” the professor said in a tweet regarding the incident. “He seemed rather nasty at the time.”

PEOPLE East Coast Editor Liz McNeil was one colleague Stoynoff confided in about the incident. McNeil remembers the day she returned from the assignment in Florida to cover Trump and his wife’s first anniversary.

“She was very upset and told me how he shoved her against a wall,” says McNeil.

She adds, “The thing I remember most was how scared she was. I felt I had to protect her.”

Deputy East Coast News Editor Mary Green returned to PEOPLE’s New York-based staff in December 2005 after a three-year hiatus excited to reconnect with Stoynoff. However, Stoynoff was haunted by her recent experience, and she opened up to Green about the encounter.

“In an early conversation we had in her office, she told me about what happened with Donald Trump,” Green said. “She was shaky, sitting at her desk, relaying that, ‘He took me to this other room, and when we stepped inside, he pushed me against a wall and stuck his tongue down my throat. Melania was upstairs and could have walked in at any time.’

“She talked about her shock, and wondered why it had happened, if she had done anything wrong. I assured her she hadn’t. She was also angry that he had forced himself on her, that she was glad someone had interrupted him, because he was surprisingly strong.”

Another coworker who knew about the attack was Liza Hamm, who was friends with McNeil and others in a “tight-knit group” that Stoynoff opened up to.

“Natasha has always been a vivacious person who wants to believe in the best of people, and this experience definitely messed with that outlook,” Hamm says. “But she is also a consummate professional. She told me that she asked to be taken off the Trump beat, but she tried her best to move past the experience and continue to do her job well.”

Stoynoff says she knew she was opening herself up for criticism when she decided to share her story, but she’s staying strong.

“I am doing okay,” she says in the new issue of PEOPLE.

In the past week, multiple women have come out with similar claims of sexual assaultagainst the 70-year-old Republican presidential candidate.

Stoynoff admits there’s a chance Trump simply pushed her own incident from his mind.

“It’s possible he just doesn’t remember it,” Stoynoff says. “It was over 10 years ago and I assume I am one of many, many women.” 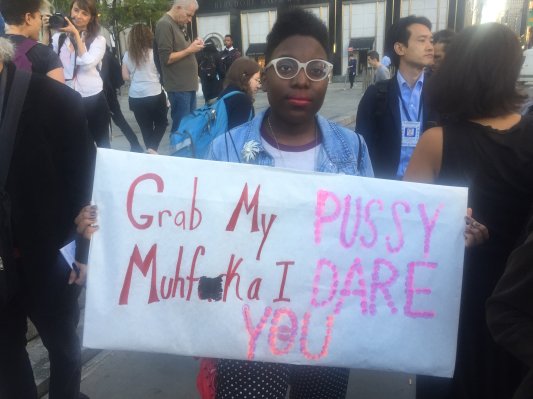