How the 2016 Election Has Improved Our Vocabularies

This election has been one for the books, including the dictionary. As masses of candidates scrambled to utter the most viral insults and countless pundits tried to sum up norm-busting candidates, they reached deep into their vocabularies—and sent people running for their search bars. Sure, the language hasn’t always been pretty, but goodness knows it has been colorful.

Below are just some of the words that the editors of Merriam-Webster and Dictionary.com noticed spiking in lookups after election-related events during this cycle.

Throughout this brief lexical recap, you’ll also find underlined words: anagrams of further terms and phrases that caught people’s notice during and after the candidates’ first two, oft-restive match ups. (A key is at the bottom of the post.)

Two Republicans, South Carolina Sen. Lindsey Graham and former Texas Gov. Rick Perry, proved early on that this crack fetches attention, when they accused Trump of demagoguery in July 2015. The word spiked several more times in ensuing months as others—like famed scientist Stephen Hawking—connected it to the Donald and his growing following.

In August of that year, a Foxnews.com op-ed described Clinton’s decision to hand over her emails from her private server as this kind of decision, arguing that the FBI would have forcibly seized them anyway. It’s a man named Hobson who popularized the phrase through his business practices in the 1700s. Words like depose (to testify under oath) and redact (to obscure or remove sensitive information) also saw lookup bumps as Clinton continued to weather her email scandal throughout the campaign.

Allegations of sexism have been rife this cycle, whether a Republican was saying Clinton needed to get better at cracking a smile or, in the case of a week-long lookup spike in August of last year, Trump was sparring with news anchor Megyn Kelly over the pejorative terms he has used in the past to describe females.

In this case, it was a more unclear, unfamiliar kind of socialism—the democratic branch openly embraced by Sen. Bernie Sanders—that caused lookup spikes after the first Democratic presidential debate in October last year.

By early December, several major news outlets had run pieces in which Trump was described as fascist, suggesting he has qualities of a dictatorial leader who forcibly suppresses any opposition. The Republican candidate has transcended dark insults all year: other spiking words used to describe him or his ideas include puerile (silly and childish), philanderer (a man who has or attempts to have a lot of sexual encounters with women) and sophomoric (overconfident of knowledge but immature and poorly informed). Critics on social media were particularly fond of the punny trumpery (something without use or value; rubbish; trash; worthless stuff).

Yes, we also heard a truncated version of this word when revelations about language Trump had used became clear via a certain video that surfaced in the final weeks of the campaign. But it was Sarah Palin who caused a spike for this word when she endorsed Donald Trump in January, becoming one of the earlier major figures to jump on the Trump train. His campaign manager later made headlines for using the same verb.

When Donald Trump did not immediately distance himself from white supremacist support in February, many set their pens against him for not disavowing that support fast enough (though he blamed the incident on a bad earpiece and did disavow the comments explicitly afterward).

Ted Cruz took his share of insults, too, this one causing a spike after it was used to describe him in a New York Times op-ed in March, with only four racers yet in the game out of an original 17 candidates on the Republican side. People headed for the dictionary when Rep. John Boehner called him “Lucifer in the flesh,” and many colleagues painted him as hard to work with, balky to a fault.

Once mid-March rolled around, both Clinton’s and Trump’s campaigns were being described as unstoppable things. The two were emerging as the leaders in the arena, hither and yon, as they won states from Florida to Illinois to North Carolina. Soon they were both the presumptive nominees (a phrase that causes lookup spikes for that word every election).

In what will surely go down as one of Clinton’s biggest gaffes of the campaign, she called “half” of Trump supporters “a basket of deplorables” in September, suggesting they were racist, sexist or xenophobic (another spiking term that means unduly fearful of foreigners).

A record-breaking 84 million people tuned in for the first debate, followed by 66.5 million in the second, in which one mean action (not shaking hands) seemed to tempt meaner ones still (threats of imprisonment) in a tense town hall. Trump brought up the “deplorable” comment, as he took what critics saw as extra turns, interrupting his opponent and moving around the stage in front of the cameras as she was speaking. Tens of millions again tuned in for the third debate, to watch what happened as the lone soldier on each side tried to finally bring the election home for their respective camps. 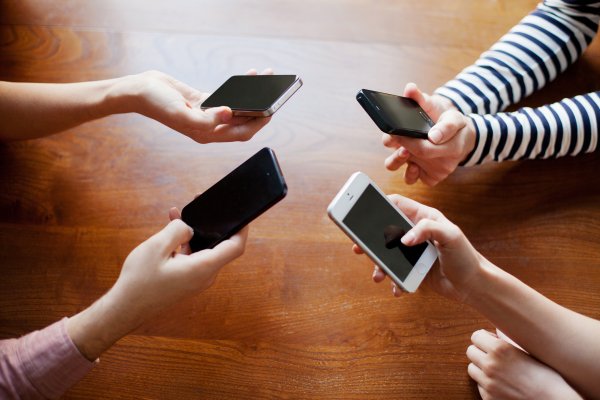 Why Technology Has Not Killed the Period. Period.
Next Up: Editor's Pick