Why Donald Trump Is Wrong About 'Rigged' Elections

Just three weeks before Election Day, Donald Trump is doubling down on his claim that the U.S. election system is “phony” and “rigged”—language that threatens to undermine the legitimacy of both the results of the election on November 8 and the broader democratic process.

“Of course there is large scale voter fraud happening on and before election day,” Trump tweeted Monday. “Why do Republican leaders deny what is going on? So naive!”

But there is no evidence whatsoever that large-scale voter fraud is occurring or could easily occur, multiple state and national election officials told TIME.

“We can absolutely trust the results of the election,” said Thomas Hicks, the commissioner of the federal Election Assistance Commission, which offers guidance to state and local election boards. “The voting process is the most secure it’s ever been.”

“The idea that anyone could hack into in any meaningful way into the election system to skew the result is—it’s not even really possible,” said Merle King, the executive director for the Center for Elections Systems at Kennesaw State University. “It’s very far-fetched, actually.”

A slew of prominent Republican politicians and office holders have also condemned the Trump campaign’s claims that the election is being rigged.

House Speaker Paul Ryan said in a statement that he was “fully confident” in the nation’s elections systems.

“This election is not being rigged,” Florida Sen. Marco Rubio said Monday during a debate with his Democratic senatorial rival. “There is no evidence behind any of this, so this should not continue to be said.”

Ohio Secretary of State Jon Husted, a Republican and a Trump supporter, added that the system of elections is “actually more secure than it’s ever been in our nation’s history.”

While no election system is perfect, and there are sometimes isolated incidents of fraud, the legitimacy of the electoral system is not in question. “If voter fraud was occurring in a widespread conspiracy to sway a presidential election it would have been the easiest thing to see,” he said.

Media outlets perennially explore the possibility of people voting early and often, election experts said, but many of those articles are based on the observation that some people appear in state and local voter databases multiple times—a clerical problem that occurs when a voter registers at a new address without un-registering at an old one. That doesn’t mean a voter actually voted multiple times.

Other media reports have emphasized the total number of alleged cases of voter fraud, a tiny fraction of which are later found to have merit. A study by the Carnegie-Knight News21 team, which analyzed 2,068 alleged election-fraud cases in 50 states between 2000 and 2012, determined that attorneys-general only successfully prosecuted on the state level 38 cases—0.000026% of the 146 million votes cast over that 12-year period. The analysis found only 10 cases of voter impersonation.

Other studies suffer from extremely small sample sizes or other methodological errors. One study, for example, reported by the Washington Post in 2014, suggested that 6.4% of people who are not U.S. citizens voted in 2008 and 2.2 percent of non-citizens voted in 2010. While those numbers have been oft-repeated by those worried about voter fraud, the study was later highly criticized in a peer-reviewed article.

Pamela Smith, the president of independent non-profit Verified Voting, which advocates for fair and transparent elections, said that one characteristic that makes the U.S. election system particularly robust is that it’s decentralized. In every state, townships or counties conduct their own elections, independently of other townships or counties. In order to affect the results of a state or federal election, a criminal would have to conspire to simultaneously rig multiple local elections, which are spread over dozens of precincts and often great distances.

“We have 67 counties in this state, each of which conduct their own elections. I promise you there is not a 67-county conspiracy to rig this election,” said Rubio at the debate Monday.

Trump has claimed in the past that the electoral system is rigged—but only at times when he has been losing state elections or appears down in the polls.

In April, after Texas Sen. Ted Cruz routed him in Republican states like Colorado, Trump lashed out in a speech, calling the system “absolutely rigged. It’s a phony deal.” In August, he again warned that federal court decisions striking down ballot restrictions would lead to wide scale voter fraud. “We may have people vote 10 times,” he told the Washington Post. When Trump appears to be leading in polls, language about “rigged elections” disappears from his rhetoric.

This month, in the wake of multiple allegations of sexual assault and plummeting poll numbers, Trump has seized the old refrain with a new fire. “Remember, we are competing in a rigged election,” Trump said at a Wisconsin rally Monday night. “They even want to try and rig the election at the polling booths, where so many cities are corrupt and voter fraud is all too common.”

Connecticut Secretary of State Denise Merrill, who is president of the National Association of Secretaries of State, said the biggest risk is that voters will end up not trusting the results of the election. “That could be the goal of all of this,” she said, referring to widespread speculation, fueled by the Trump campaign, that the election will be rigged. “If you get people to lose confidence in the results, maybe they’ll stay at home and not vote.” 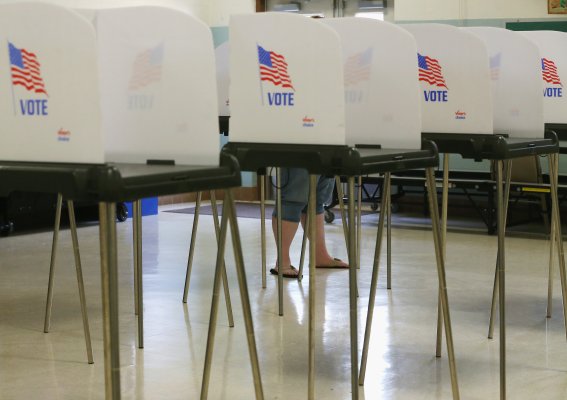