From this Kurdish peshmerga outpost in northern Iraq, Bazid Jotyar looks down on the villages his fellow fighters took from ISIS on Monday morning, smoke still rising from buildings below. “Now the peshmerga control these villages,” says Jotyar, with the bravado typical of Kurdish fighters. “The peshmerga are brave and have modern weapons, plus they fight hard.”

There are more that 30,000 fighters amassed for the operation to take back Mosul from ISIS, which has controlled the northern city for more than two years. On top of the Iraqi national army and the Kurdish peshmerga, there are local Sunni tribal fighters, and the mostly Shi’ite militias of the Popular Mobilization Forces, all with competing interests. “They all know if they are not part of the battle they will lose influence in Iraq,” says Dr. Renad Mansour, an Academy Fellow for the Middle East and North Africa at U.K.-based think tank Chatham House.

In the first stage of the Mosul operation, Iraq’s national army hung back and let the Kurdish forces move forward, vehicles carrying the red, white and green Kurdish flag crested with the yellow sun. Jotyar says the peshmerga will clear villages like these on the way to Mosul. “The peshmerga forces will take control of the Kurdistan region and the Iraqi forces will go inside Mosul,” he says.

But where the borders of that Kurdish region will be drawn are heavily contested. Jotyar says it runs to “the edge of Mosul city” but Baghdad would draw the line much farther back. Kurds already had a degree of autonomy in northern Iraq, but the battle for Mosul may give them the opportunity to carve out more.

Many of the areas now held by the peshmerga are contested and are meant to be decided by a referendum under article 140 of the post-Saddam Iraqi constitution, but it seems they are instead being decided with military moves. “The way they need to redefine borders is by having troops on the ground,” says Mansour. While the Kurds are unlikely to keep everything they will control after the Mosul battle, he says, they can use the territories as bargaining chips in post-ISIS Iraq. “They are going to go to the negotiating table and say ‘these areas are under us, so what do we get if we give up?’,” says Mansour.

Read more: The Next War in Iraq

It’s not just the Kurds who are jostling to change their role after ISIS. A few miles from the peshmerga outpost, a black truck filled with Shi’ite fighters speeds by carrying a flag with the image of Hussein — an important Shia religious figure whose name they often chant as they go to battle. Shi’ite militia, under the umbrella of the Popular Mobilization Forces, are the most controversial of the groups taking part in the operation to liberate the primarily Sunni city of Mosul. Many have been clear that for them this is about revenge against ISIS, after the militants ceremoniously executed hundreds of Shi’ite soldiers as they swept into Iraq.

“Our principle aim is to defeat ISIS,” says Karim Nouri, the spokesman for Popular Mobilization Forces. “We don’t have other political goals.” Nouri says the militia will stay outside the city, cutting the ISIS’s supply lines in support of national forces, unless the “battle becomes very difficult.”

Their presence may not be welcomed. Many of these militia have been accused of torture and abuse of civilian Sunni populations after helping to retake territory. Some Shi’ite militia are also backed by Iran, which has its own interest in keeping friendly Shi’ites in control of the country. “If Iraqi security forces are successful in evicting ISIS from Mosul, we are going to immediately be faced with secondary problem—Shi’ite militia patrolling and controlling what is traditionally Sunni territory,” says Chris Harmer, a senior analyst with the Washington-based Institute for the Study of War. Letting the Shi’ite militia take control of the areas now under ISIS, he says, will essentially be replacing one group of militants with another.

Much is at stake too for the national government. This battle is a chance to show Iraqis and the world that Baghdad is capable of maintaining control and sovereignty over all of Iraq and of fairly governing the country’s diverse population, which is reflected in the demographic mix of Mosul. That has very much been in doubt since ISIS took control of one-third of the country’s territory, faced with only weak resistance from the national Iraqi army and welcomed by some Sunni communities.

However, even with heavy air support from the U.S.-led coalition the national army can’t do it alone, putting Baghdad in the difficult position of needing Kurdish and Shi’ite paramilitary forces to help. “Everyone wants ISIS out of Mosul. Everyone wants to kills ISIS,” says Harmer, “but what are going to be the fall-out effects of that?” 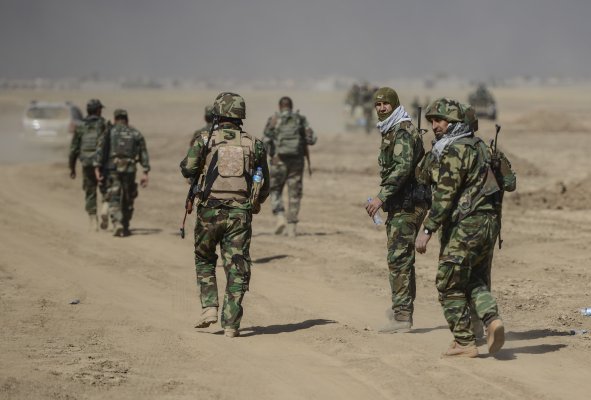 Freeing Mosul Would Not Defeat ISIS
Next Up: Editor's Pick